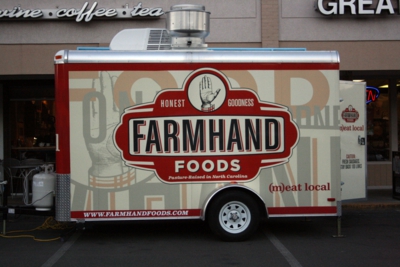 This food truck is a partnership between its owners and local, pasture-raised animal producers and butchers to offer sausage rolls. 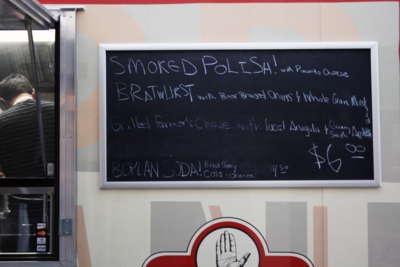 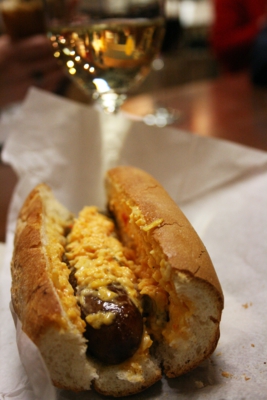 Sausage with matched wine pairing in the background

In all honestly, the sausage was good, but I’m no sausage connoisseur. The bread, however, was outstanding. It had a crunchy exterior and a soft, fresh interior and came from a local bakery—I don’t know which because I believe Farmhand uses a couple different companies. The pimiento cheese was by far the best I’ve had so far in my Southern foods samplings, in no small part due to the fact that it was warm and not overwhelmed with salt or mushed into an unappetizing lump. Also worth noting was the awesomeness of the sausage wagon’s workers running finished rolls inside 3 Cups, where we were chilling, as they were finished. It was cold out there!

My sausage roll was tasty, though I was sad I didn’t get to try a spicy one instead. Anyone want to share thoughts on the spicy ones? Farmhand Foods also offers at least one vegetarian option per menu, but they do sell out of all their offerings, so don’t be surprised if they come up with another item on the fly for vegetarian diners.