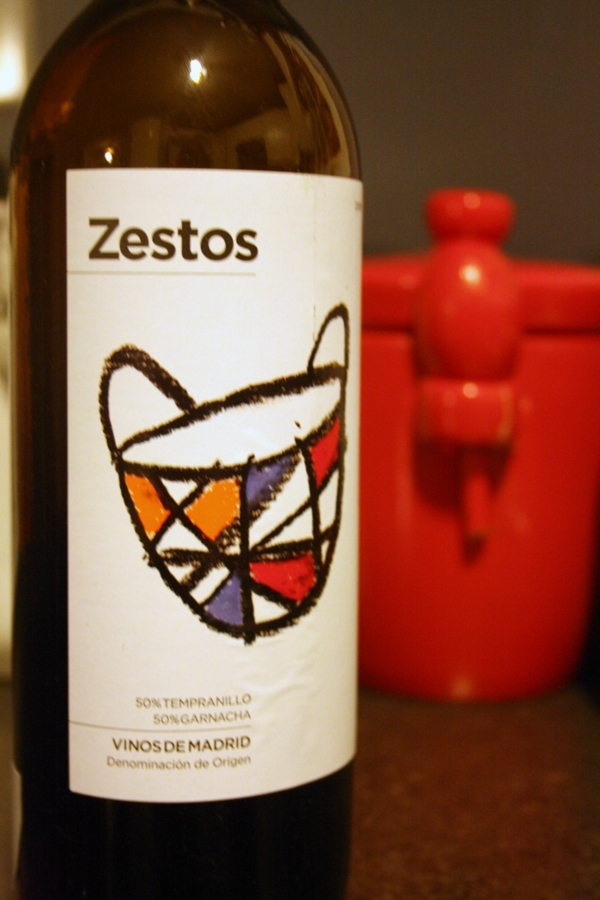 This 50%  tempranillo and 50% grenache blend is an attractive garnet. The nose is MIA. It tastes tart, like a raspberry jolly rancher but richer in flavor. Some molasses deepens the flavor and thickens its texture to medium-bodied. It’s quite good on reflection.

So, this guy rhymes of blackberry, currant, raspberry, and cherry. Throw in anything else red and fruity and you’ll start to understand the sensations I’m encountering. This is a very pleasant fruity blend. Not overly sweet. Just right, really. I believe this is where the Garnacha comes in. Delicious.

The legs are perfect. Not soupy thick or chewy. And not overly thin. Really, the consistency of the concoction is perfect. Kudos to Zestos.

Blue State Carpetbagger on Red State Wine on the 2007 vintage

This was a good buy in a gutsy, blue-collar red.

Mouth: Chunky and ripe, with low-ish acidity and some tannin that was just north of soft. Full-bodied, with a slightly hot finish. Not complex at all, but a fair amount of flavor for the buck.

Fermented Reviews on the 2008 vintage

Zestos? It’s rather zesty if you let it breathe for at least 45 minutes. Short aeration techniques seems to fail this one. Once fully aerated it’s quite good, as my sampling from the 2nd day of opening revealed. It was gone before the end of the third day. A good wine for either sipping or dinner at this point.

It’s a clear, bright, garnet colored wine with not a whole lot of structure, but with some pretty big tastes. There are some big berry notes to this wine, both on the tongue and nose, but only if it breaths for 30–45 minutes before imbibing. Even an aeration device wasn’t enough for fully enjoying this wine, at least for the first day. There is plenty of acidity and tannins (moderated of course) and a medium to arid dry finish that lingers long after the sip has gone. Still, there’s some good balance that makes this one acceptable for either sipping (cab fans take note) and dinner.