For the second meeting of the Social Media Supper Club (an excuse to try-out restaurants with friends from Twitter who also love food) we went to the Blue Corn Cafe. They offer mainly Mexican dishes with some Cuban and Puerto Rican options as well.  Going into the meal, most of us had the impression or experience of Blue Corn Cafe being a great find when it opened, which has now become less exciting compared to the other Mexican options in the area. Leaving the meal, we felt about the same. The food is great if you’re just looking to fill up for the evening, but if you’re aiming for a food experience, then it’s not quite up to snuff. 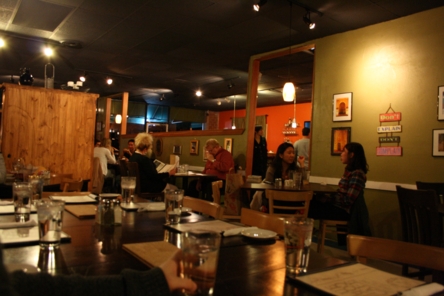 The restaurant is painted in soft green and bright orange with some wood mixed in. It’s divided into three separate spaces. It’s midsized and mostly filled up during the evening meal. Seating was prompt, and the service was patient with our large party. However, service in general was . . . odd. I really don’t know how else to describe it. The server was nice enough, but he seemed unprepared for organizing split checks (which I know isn’t standard elsewhere in the US, but it is standard here), and his demeanor was just strange.  There were some appetizers that never came, and the chips and salsa were offered without making it very clear that they weren’t complimentary. Mainly, though, he just wasn’t good at being unobtrusive.

My husband and I split a pitcher of sangria, which was delicious and somewhat bubbly. 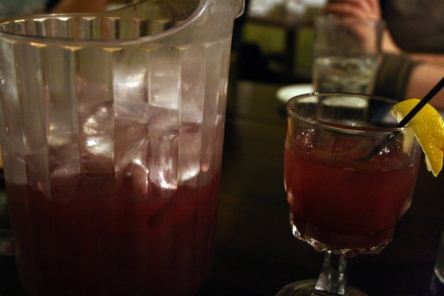 Good margaritas were had by several diners in various glasses, spurring fights over whether margaritas in a pint glass or Stella Artois glass were better merely due to the container offered.

A few of us did get our appetizers, including a trio of dips for chips and plantanos fritos. 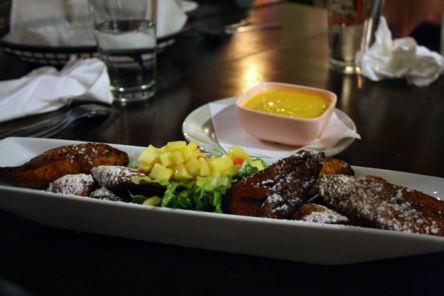 I dug the plantain presentation and the dish. That’s a mango and banana dipping sauce in the back and mango salsa up front. The plantains were dusted with powdered sugar and cinnamon and either dry fried or flash fried in the deep fryer. They were thick, solid, and starchy, which some of my companions didn’t like, preferring plantains simmered until sweet. I like plantains both ways, so I was happy. Another Carpe Durham poster has also expressed her love for their tostones, a refrying method of making plantain chips.

Back to the dish at hand, the mango in the salsa was not ripe enough, but it was still sweet with a subtle kick of heat. The mango and banana dip was fantastic: thick and flavorful. The pureed tomato salsa served with the chips was bright and tasty. The guacamole was declared to be wonderful, with the ability to easily pick out the flavors of the jalapenos and cilantro mixed in.

For the main course, I went with papas rellanos, which is similar to chile rellanos except that the fried, stuffed goodness is potatoes instead of chiles. 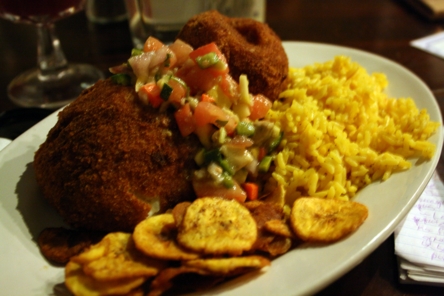 I thought it was great. The potatoes were garlic mashed, which was unexpected, with a layer of picadillo beef in the middle that gave nice flavor to the dish, but could have been doubled in size. The lumps were coated in a very fine flour or corn meal (I couldn’t tell which, but it was the perfect coating for the dish) and fried. My third variety of salsa for the evening was served on top and included tomatoes, zucchini, and carrot mixed with a more-than-healthy dose of lime. The accompanying saffron rice was nothing to write home about, but it’s rare that restaurant rice is.

A few people got the picadillo beef entree on its own, and they found it okay, but not as flavorful as hoped. 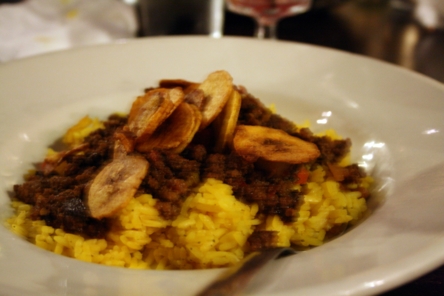 With nothing but the ground beef served over rice and a few plantain chips sprinkled on top, I could see why. They also complained that it got cold pretty quick. Another diner found her breaded and fried bistec milanese with mojo sauce, “kick ass,” and the platanos con pollo was celebrated for its inventiveness–chicken breasts stuffed with plantains and mango. The accompanying rice and beans, again, was not warm enough.

Dessert did not have as many plusses as the entrees. The orange and vanilla flan was a fun combination, but it turned out more sickeningly sweet than tasty, largely because the sauce was not reduced enough. The sopapilla was basically a fried tortilla with sugar and honey, and not at all appealing. 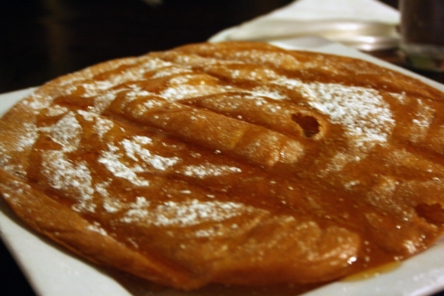 To be fair, sopapillas come in many varieties, and we were expecting something more like the puffed pastries that resemble little pillows than flour tortillas. It was probably closer to Peruvian cachangas, but I’m still not sure it wasn’t just tortilla. There was another dessert ordered that turned out to be the exact same thing except that it was cut into strips and equally unappealing.

As luck would have it, I ended up with the best dessert of the bunch, and that was only because they were out of tres leches cake. 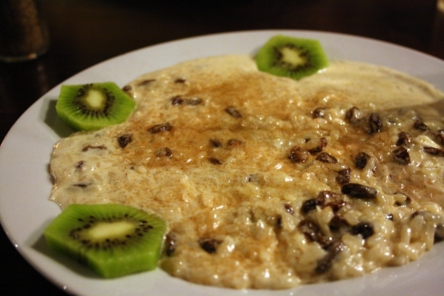 It was the arroz con leche, a warm rice pudding. I thought it was quite delicious, discounting the fact that it was burning hot for the first couple of bites. After it cooled, though, I enjoyed the thick texture of the milk and the puffed up raisins. The rice was cooked just fine and melded well with the other options. Topping it with kiwi was strange, but hey, I love kiwi, so I didn’t mind.

The group’s reactions to the whole meal at Blue Corn Cafe were mostly along the lines of “Totally decent but overrated” and “Overpriced.” The creativity of entrees was celebrated even if quality control failed in some areas (in addition to our temperature issues, another Carpe Durham poster has reported being served a nearly-rare chicken breast once). I think I was the only person completely happy with my choices; the menu was definitely hit and miss in the dessert department but the food was good to great for the most part. Overall, I think any of us would eat there again, but we wouldn’t go out of our way to seek it out.