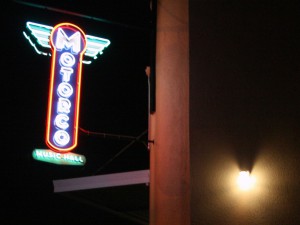 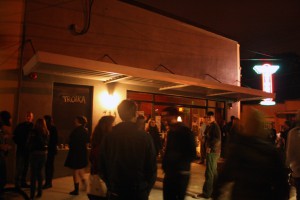 Nice sign, huh? Motorco is an almost two-month-old addition to the corner of Rigsbee and Geer, transforming a former car dealership into a rock club with a capacity for 500. I went for a show during Troika, and I thought the sound was fantastic, but I’m no expert on these things. 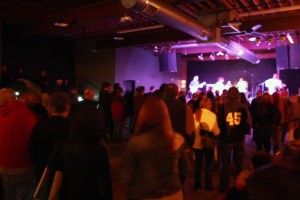 It’s got the classic, dark rock club feel in the main room, with a nice curveball of a full-length window that runs nearly the whole length of the establishment. It adds a wonderful, street-scene appeal to the space. 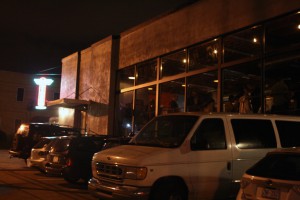 You can kind of see the windows here.

There are also bleachers on both sides of the large room, and an attractive row of lights above the bar. 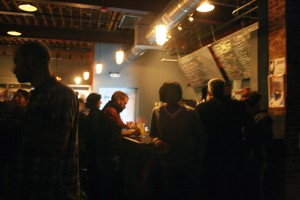 For drinks, they have beers by the can, bottle and draft, ranging from $2 to $8, I think, with some local brewery offerings. This particular evening, they had a list of “local shots,” named after the different bands performing at the venue. I chose the Super MoCo, the only one not named after a band, because the ingredients sounded the most exciting. 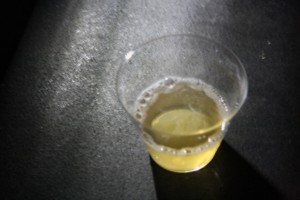 It was a combo of bourbon, rum, ginger, and Southern Comfort, and quite tasty. It was about twice as large as a shot, in truth, but $6 still seemed a bit much for that little alcohol. I don’t usually buy shots, so I may be out of touch with the going rate for them.

As is the case with Fullsteam, food truck and cart offerings outside appear to be plentiful, and King’s Sandwich Shop down the road might be convinced to stay open later soon, too. They already held later hours for Troika—if the nightlife picks up enough to bring it, hopefully they’ll stay open late on the weekends regularly. Motorco looks set to be an awesome rock club venue, and is only the most recent opening in this up-and-coming area of Durham. Rumor has it per DID at Carpe Durham that the owners would like to open a restaurant in their additional side garage space. Also, there are plans underway for a beer garden by Andy Magowan, formerly of Piedmont, in the gas station just down Geer and across the road from King’s per the N&O. Can’t wait to see what the neighborhood will look like in the next year!