Last weekend, as you all know, unless you’re my reader from Uganda, then maybe you don’t, was Halloween. Since it was on a Sunday, I had two days’ worth of fun. Halloween is my favorite holiday, so the more merrymaking the better! I had my costume planned out since buying a hat at Disneyworld last February, that of the Alien Plush Toy. 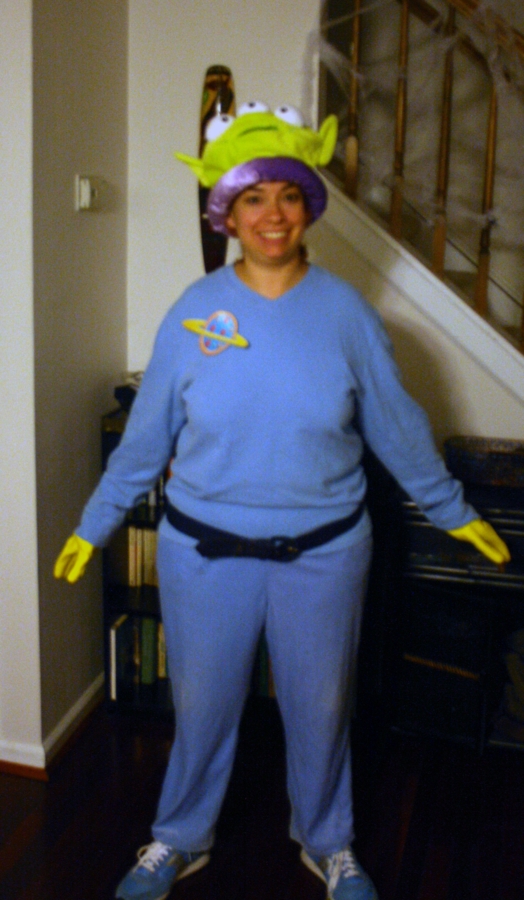 I’ve loved those toys since the first time I heard them utter “The Claw.” I have a small one from my time working at the Santa Cruz Cinema 9, when we sold them to promote Toy Story 2. There’s a funny story about how I made an espresso handle blow out of the machine and covered the whole Alien Plush Toy display in grounds . . . okay, it wasn’t very funny. Who knew I could clean that fast?

Back to Halloween 2010! Saturday night, we headed to the West 94th Street Pub for costume karaoke! 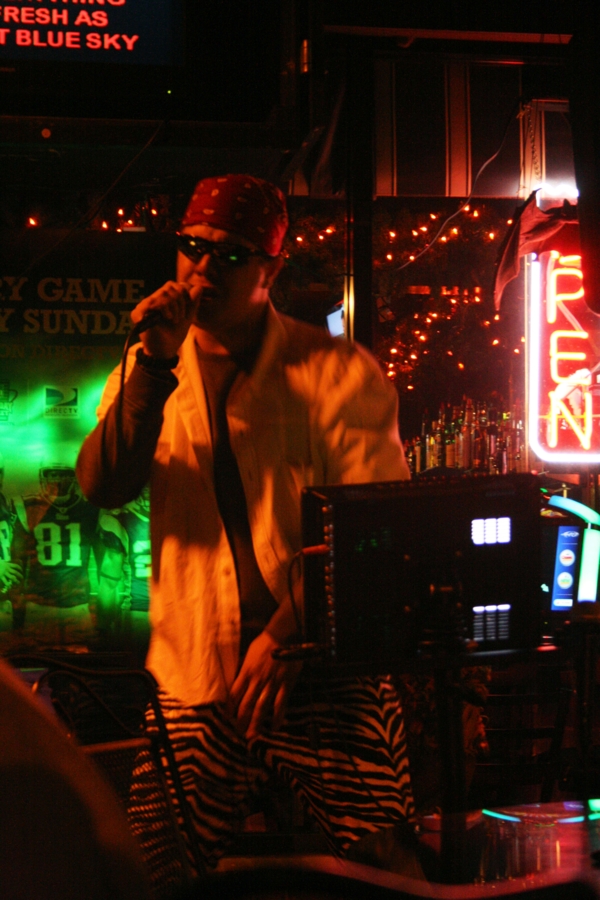 Of course it’s the real Axl, ya’ll! He’s got the sways down.

A note here on the pictures—none of them are great due to those ongoing camera problems that recently resulted in no flash use, until it randomly worked again last Friday. That’s getting repaired tomorrow, thank god. When I saw the blurry, dark results of my photo taking, I considered not posting them at all. But after much reflection on the nature of Halloween, I decided the blur and dark lighting was rather appropriate. And once that camera gets fixed, I’ll be all out of bad-picture excuses. 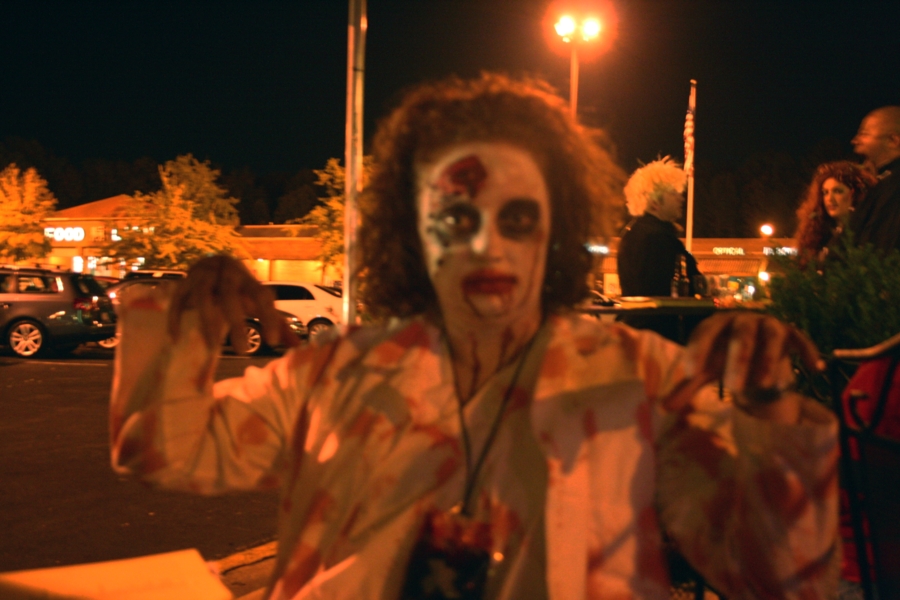 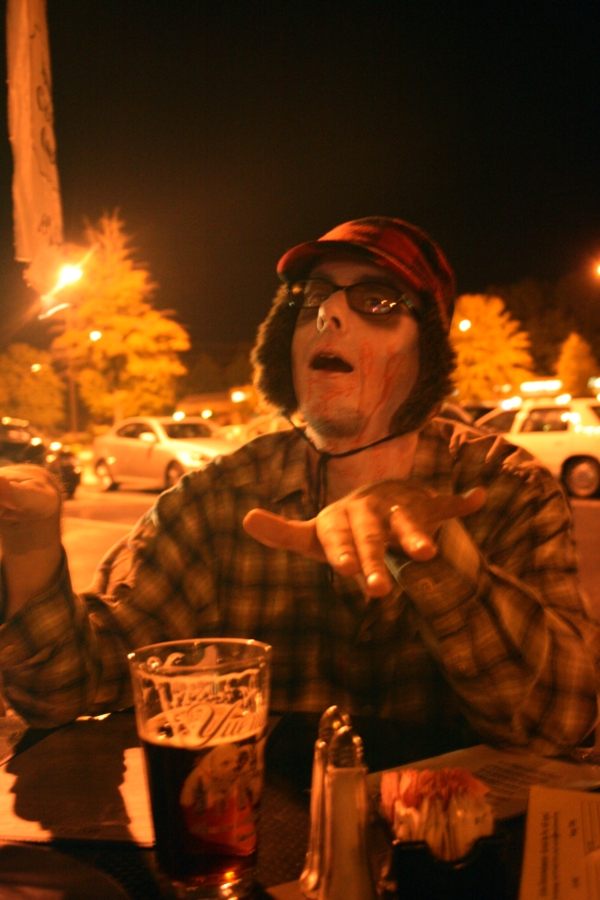 Matt, the Zombie Hunter. Not hunter of zombies, for the record. 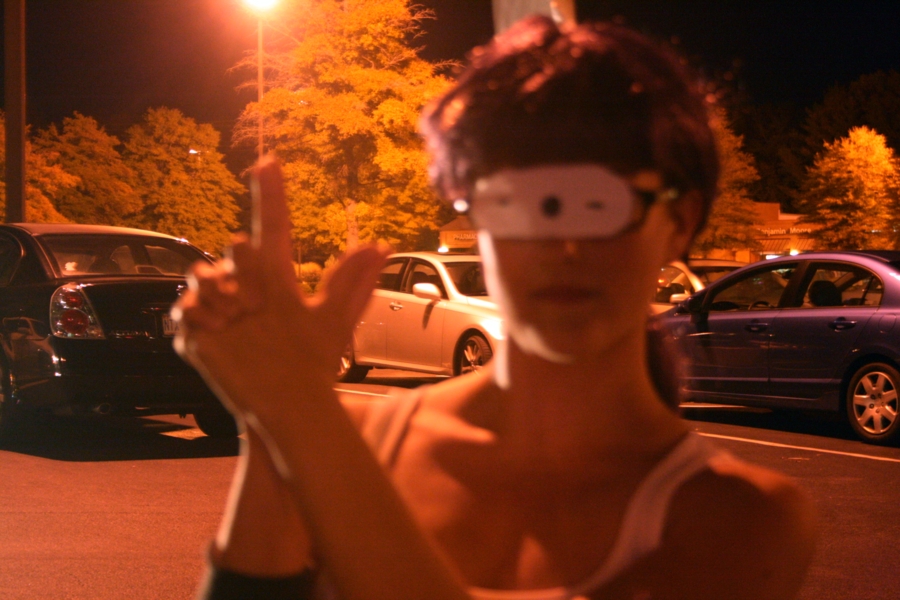 Rebecca as Leela from Futurama 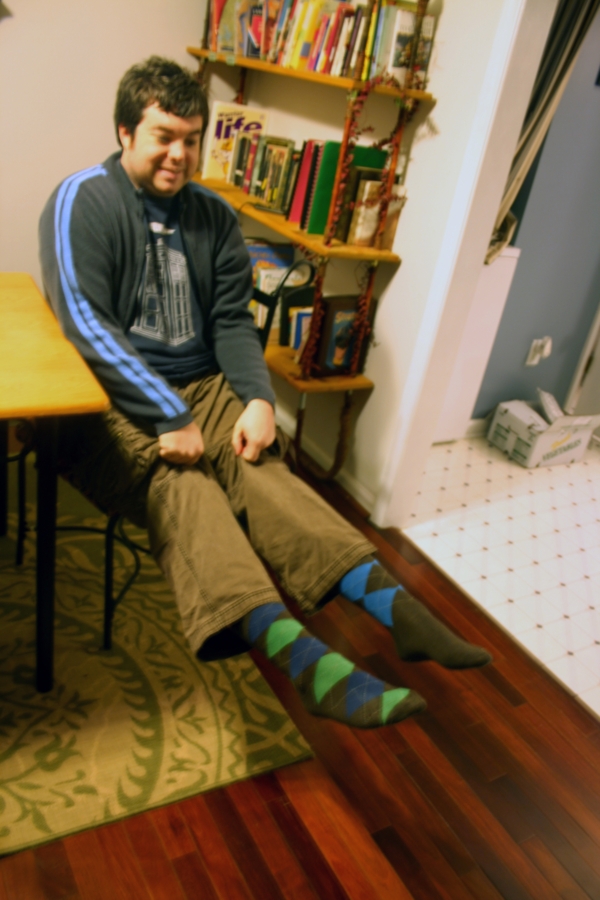 Ben, claiming he was dressed as Socially Awkward 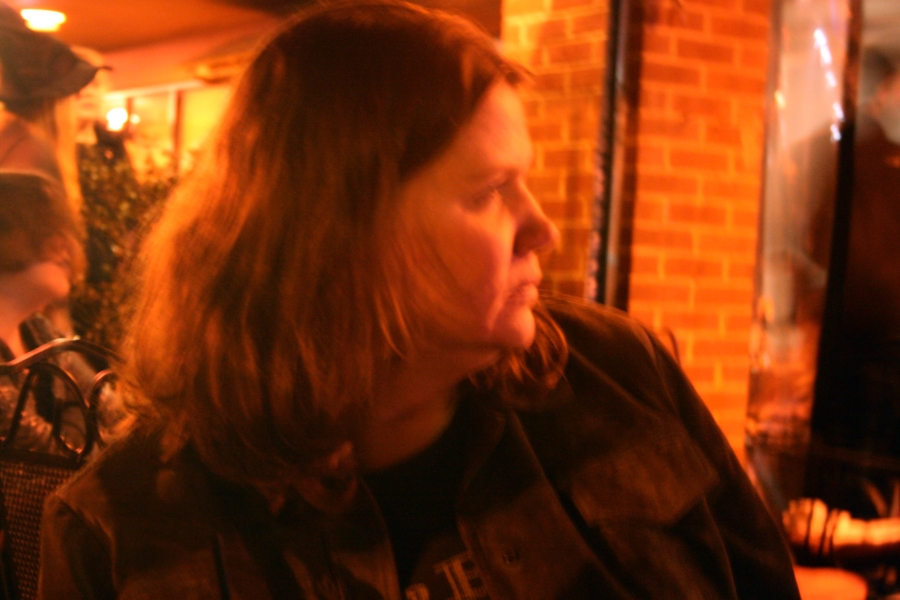 Ellen, who brought a friend, too, but that picture was really, really bad.

A few of us joined in for costume karaoke, because how could we not? 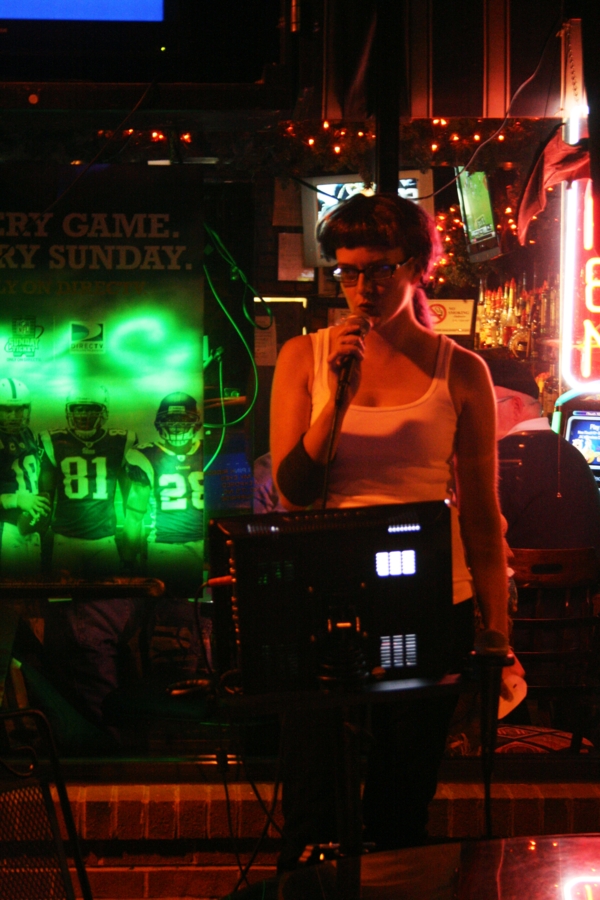 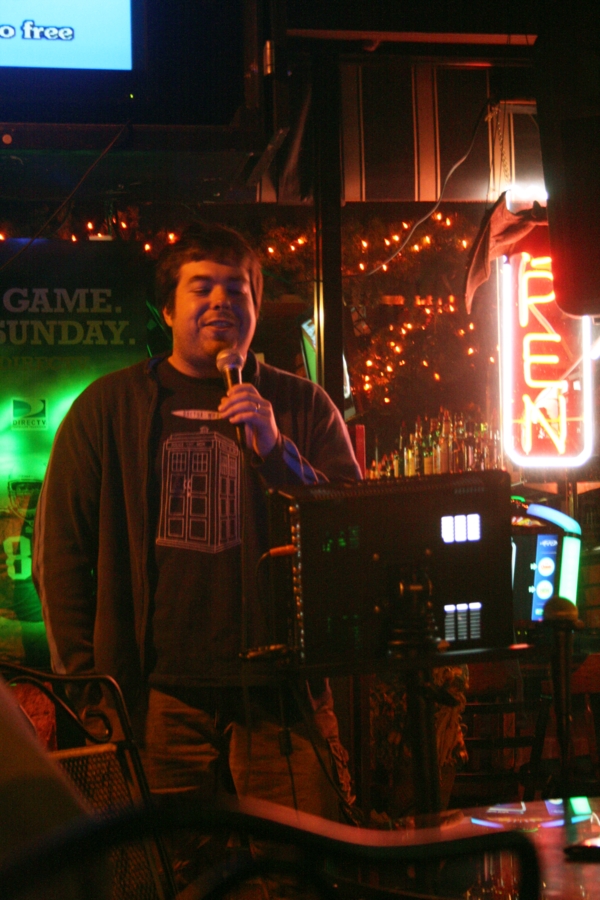 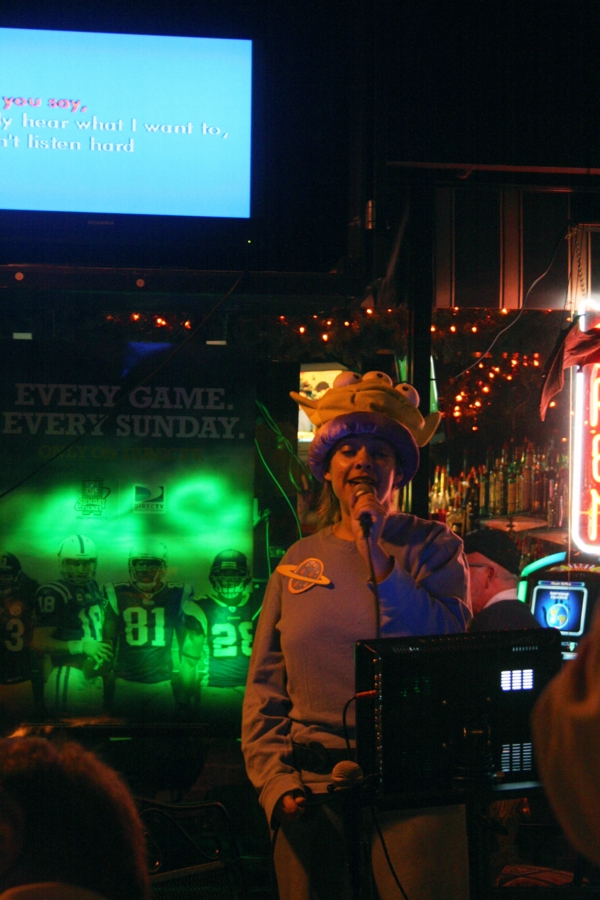 Sadly none of us won the costume competition, though I personally believe Melissa deserved it. Girl’s a hardcore crafter! Saturday ends with pictures of Slash, Richard Simmons, and a group photo of us all. 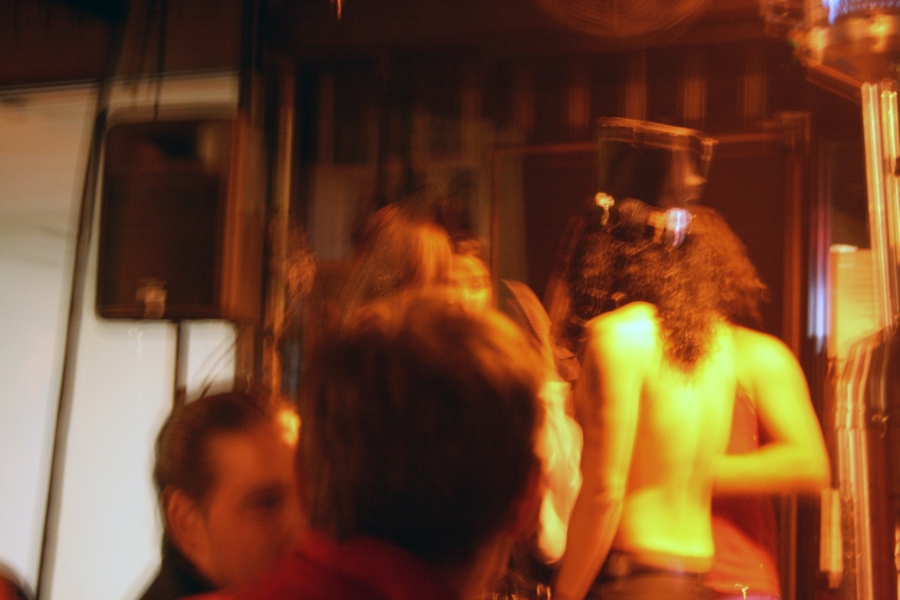 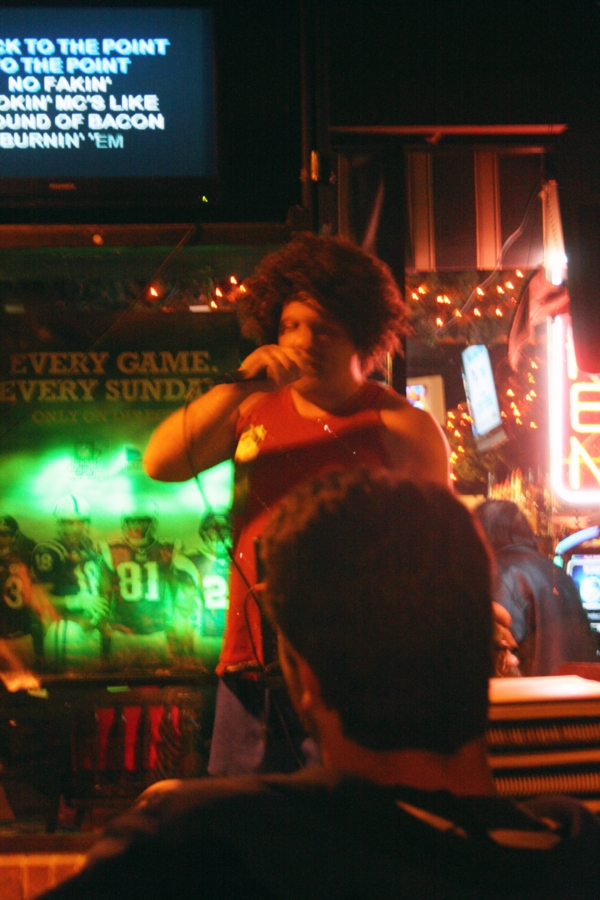 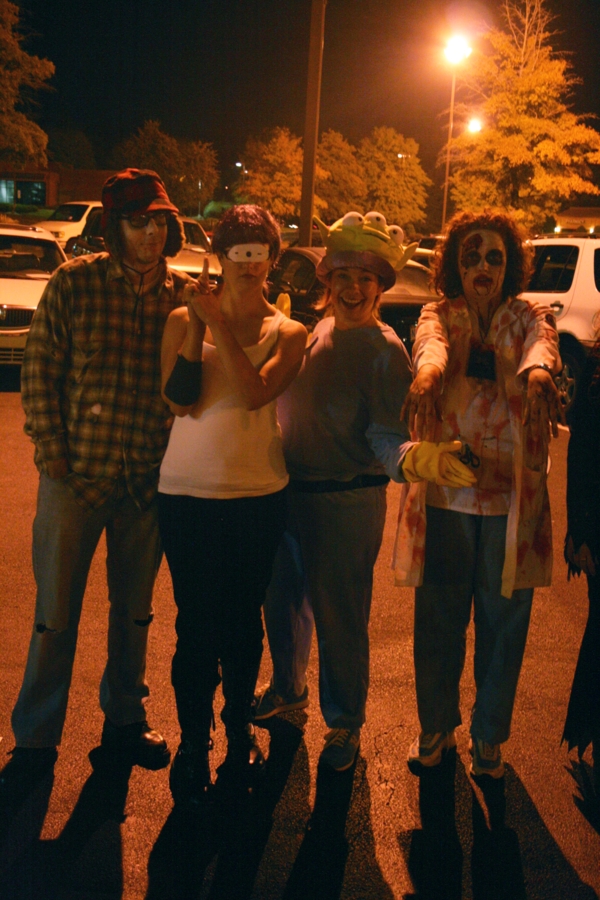 For those of you that aren’t local, including my Ugandan, Franklin Street in Chapel Hill is the happening place on Halloween. You go to see what craziness can be had when college students design costumes. The downtown is cleared of traffic around 9:30 and the hordes descend. Since the town of Chapel Hill decided to try and scale down the crowds the last few years, it’s actually been a lot easier to get there, so hey, I appreciate the effort, Chapel Hill! Laura was my companion for this year’s street tour, in an adorable penguin costume. 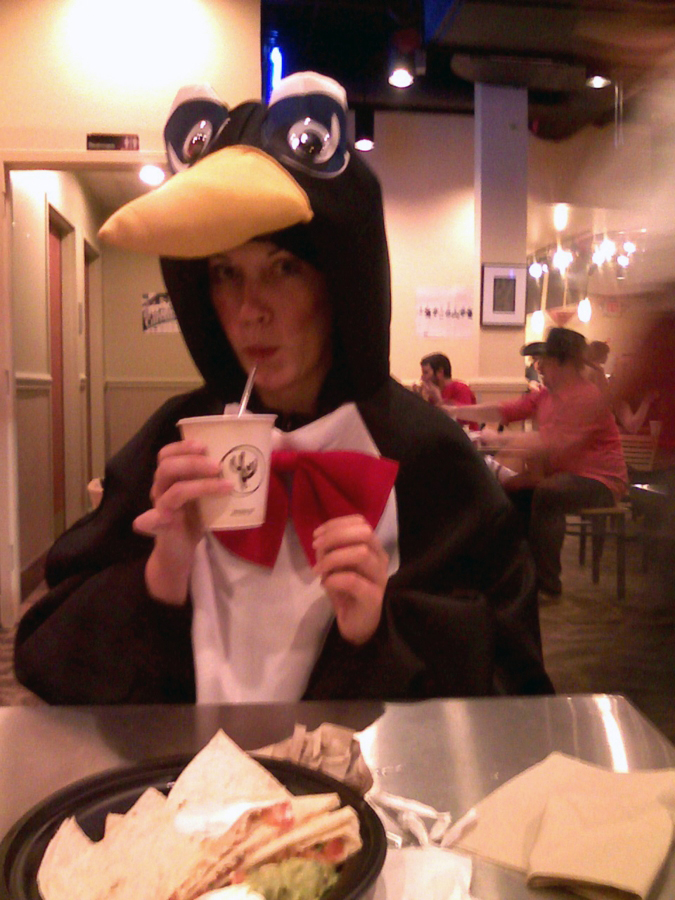 How Penguins Drink in the Wild

Laura, having been at a shindig previously in the weekend, already knew that her beak was a people magnet for grabbing or batting it countless times. We also learned that many, many people like to say the word penguin as though it is a revelation. Here are a few other gross generalizations I’ve put together from our Franklin Street experience this year:

1.       Hispanic families enjoy sitting or standing on the sidewalks to watch the costumed folk pass by like a parade.

2.       Asian families or students are very likely to ask you to take a picture with them. I swear someone must have put out a memo to act out the stereotype—it was that crazy. If so, bonus points for so many people in the Typical Asian Tourist costume!

3.       Scantily clad women are a bit on the decline, but that’s because scantily clad men are taking up the mantle. Let me tell you; nothing pleases the crowd like boys in G-strings and speedos or men in dresses, flashing the Hispanic families on the sidelines.

4.       The best costumes are group costumes that involve a bit of a sketch, also. For instance, the highlight of the evening was undoubtedly when a group of BP oilmen called out, “Penguin! Save the Penguin!” and swarmed Laura to “rescue” her from the spill. They did this over and over throughout the night to every animal-costumed person they saw. 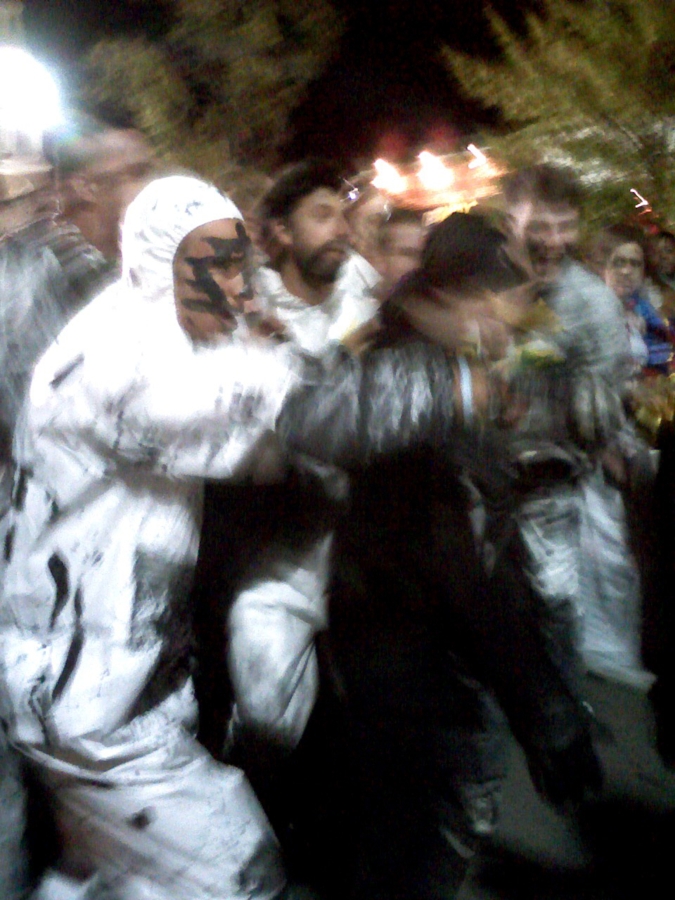 And now I conclude this blog of Halloween celebration with a few of my favorite costumes of the night. If anyone has a photo of the quetzalcoatl costume, you MUST send it to me. That contraption was amazing. Also, I did not take a picture, but of course, Captain Picard was there as he is every year. 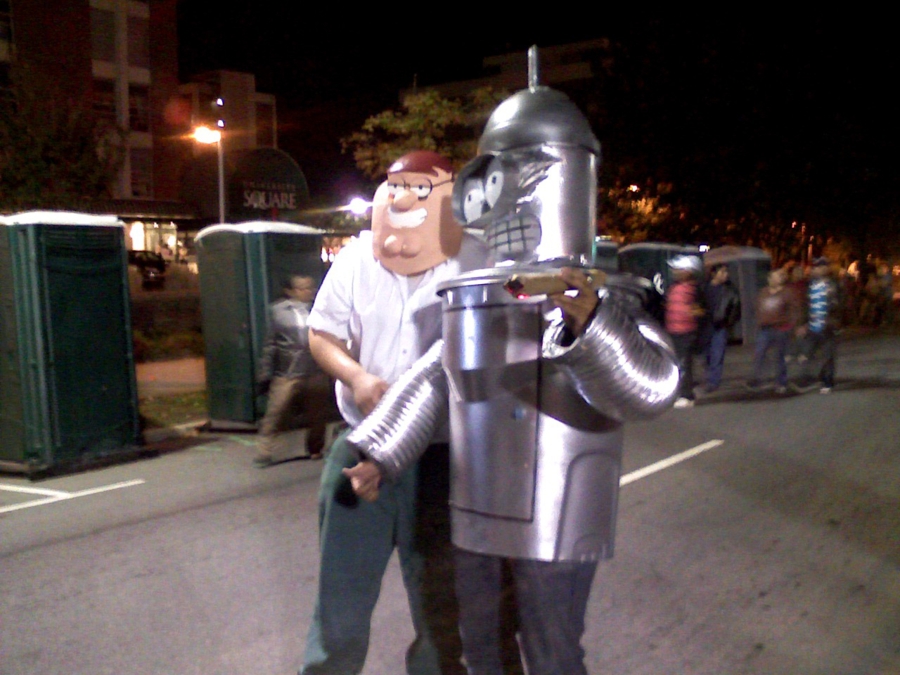 Peter Griffin and Bender, a chance meeting on the streets 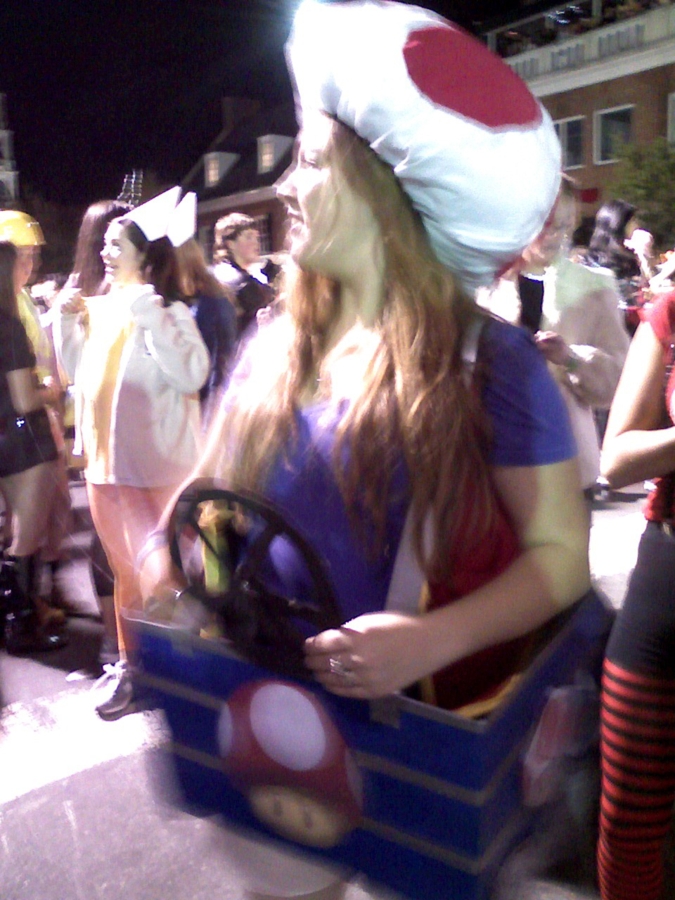 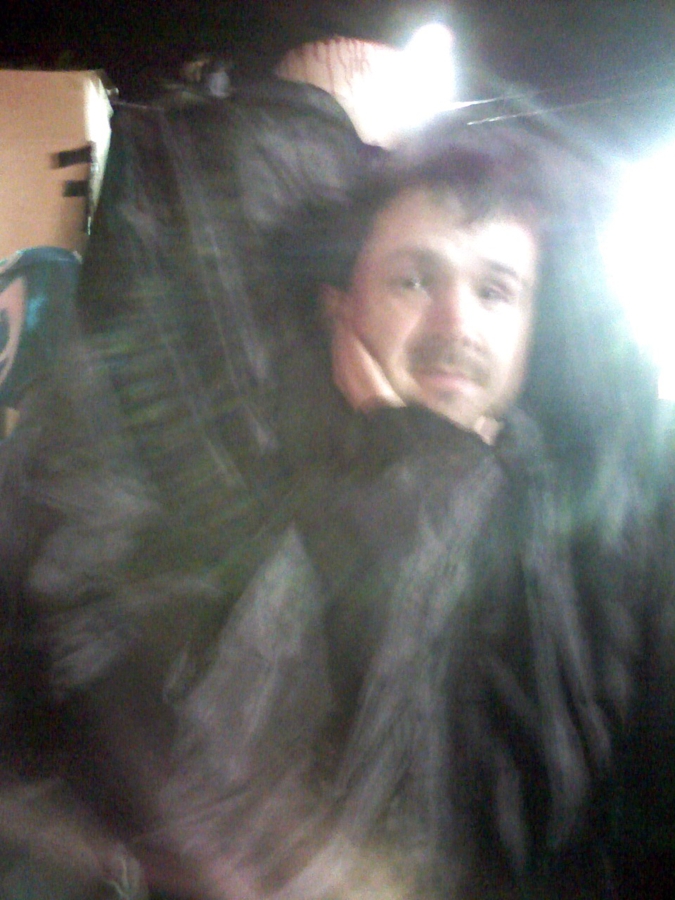 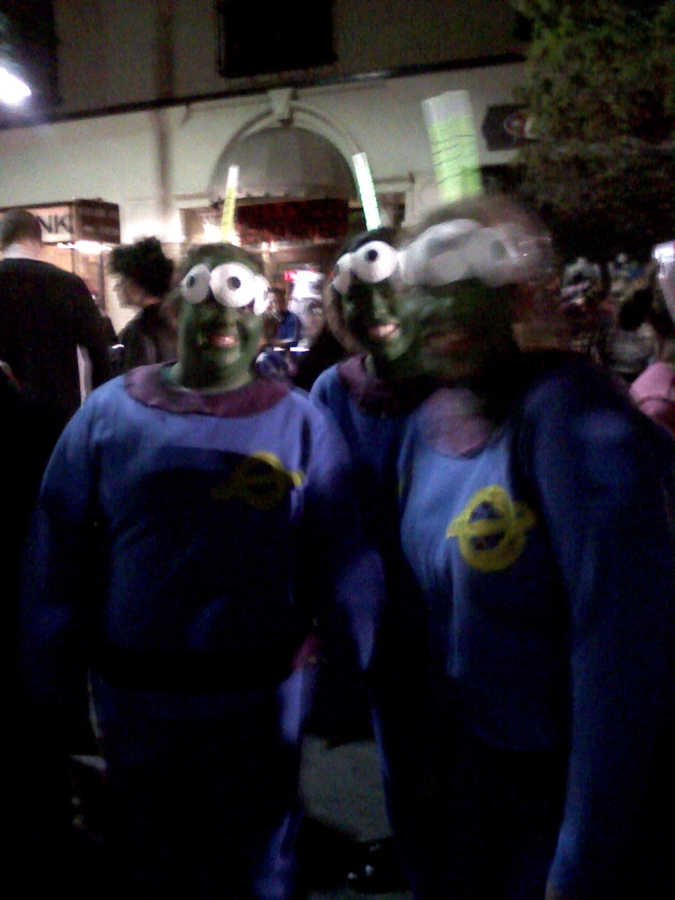 Fellow Followers of the Claw 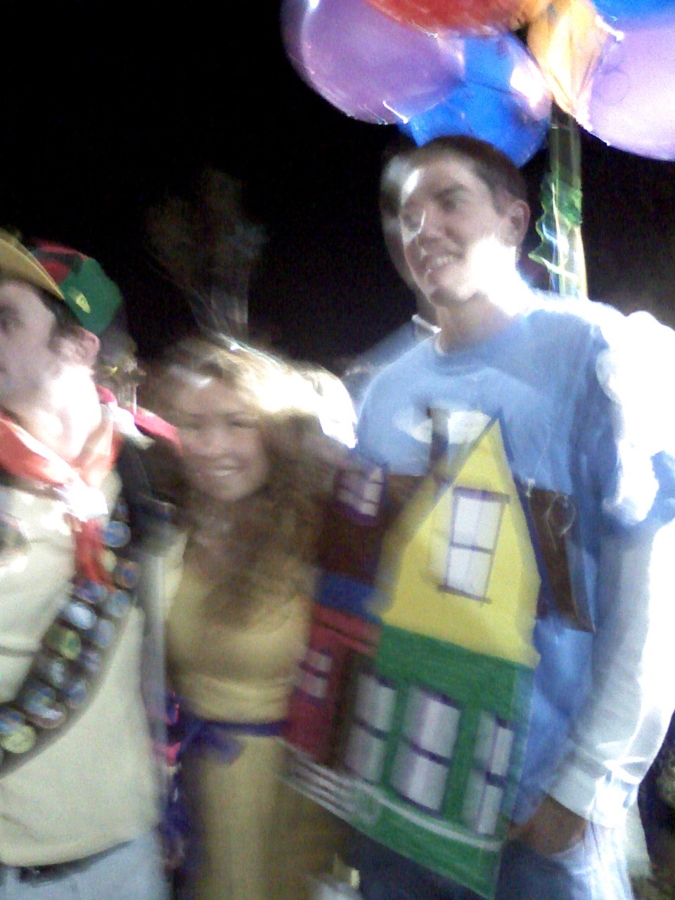 Up, the movie. The cub scout’s on the left.

And I will end with another shot of Laura, because that costume really was fantastic. 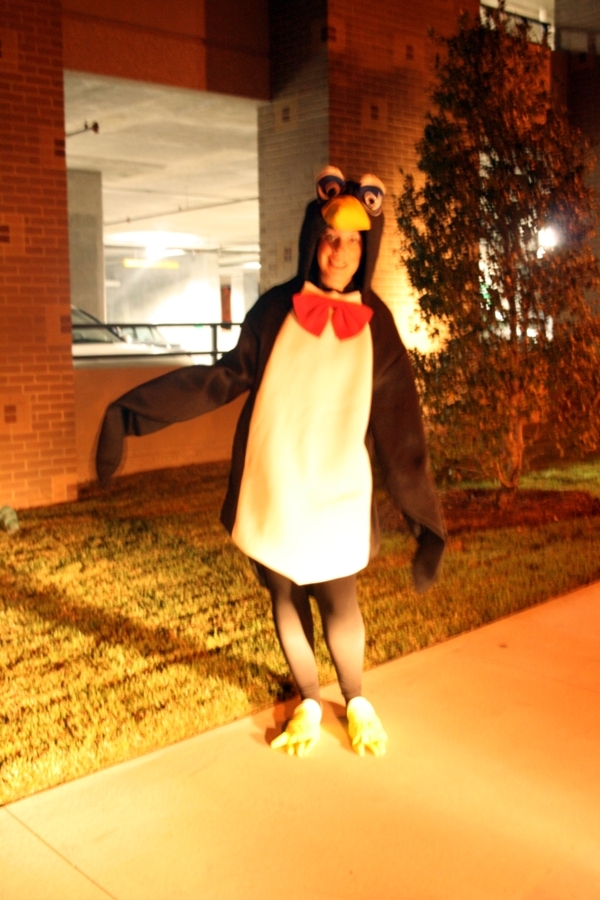