As I type, I am flying back towards the East Coast from spending the weekend at my mother’s home in Tieton, Washington.I was quite impressed with the beauty of the area this time round—likely because Mom and Tim have moved away from Yakima, the largest town in the vicinity, and higher into the valleys of their mountain range.It’s quite gorgeous as you can see: 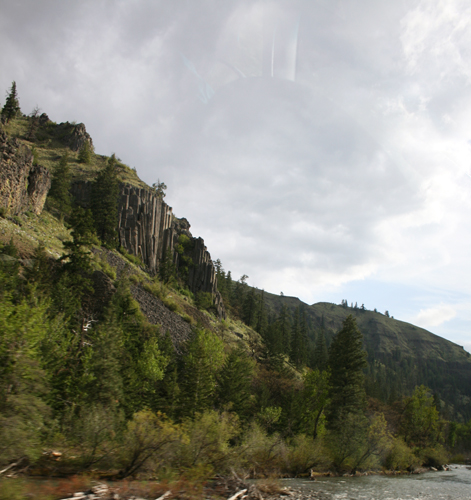 I didn’t get any good photos of the orchards but they are full of cherry and apple trees, which were just starting to bloom.

The trip was uneventful and relaxing.Ben and I were more than happy to make use of their hot tub and we played a lot of board games.Impressively, my mother won most of them and I swear we weren’t letting her win just because it was Mother’s Day.I’m more cutthroat than that.By the way, anyone know where I can buy a game of 221 B Baker Street?

Mom and Tim have two long-haired kitties and play den parents to three other neighborhood cats so I definitely got my fix of animals.Below is Tom, a gorgeous mix of bobcat and domestic short hair. 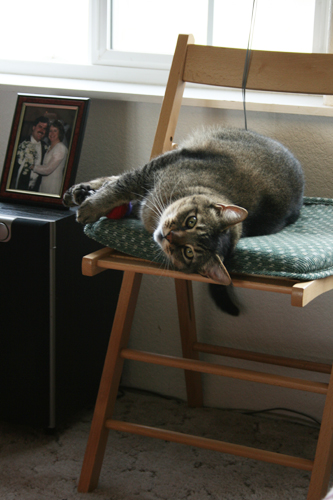 I’d guess he’s about a quarter bobcat, which shows in his muscles, large head and paws, and quick swing.He was adorable, though.

We took Mom and Tim out to dinner on Saturday night at the Trout Lodge.It had a fabulous view and everyone ate to their heart’s content.I managed to not be grossed out by my head-on trout.Here’s Mom and Tim at the restaurant. 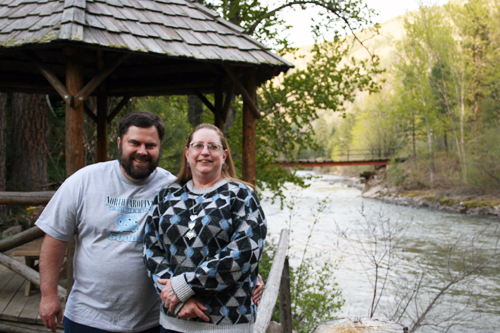 Not much else to report for the trip. Here’s hoping Loki’s still home when I get in tonight!We had a call from a subdivision over on Sunday.He had wandered to their house and was looking lost, much like the other time he got lonely and went exploring overnight when Verdandi was missing.They dropped him off back at our house this morning, which was very much appreciated, Randy of Woodwinds!I guess I’m going to have to keep them both inside when we leave now.

Coming up:Ben has three friends with weddings this summer and fall so we will be making weekend trips to Massachusetts twice and one to DC.We’re going to stop over at Gettysburg on the way back from the first wedding and are totally taking a ghost tour.I’m hoping to also make it out to California for my high school reunion on 10/25 and spend a week showing Ben the coast of California via Highway 1.If you live between Santa Maria and San Francisco and want to invite us over for a night that following week, we’ll take you up on it!

One thought on : Travelogue: Tieton, WA