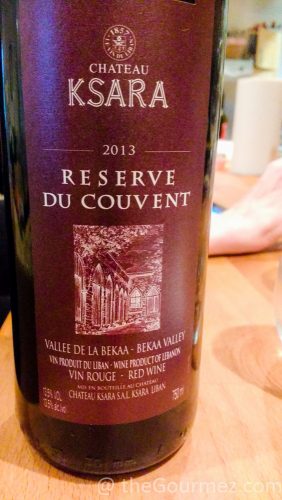 Obligatory disclaimer: This Château Ksara 2013 Reserve du Couvent was given to me for review.

Founded by Jesuit priests in the mid-1800s, Château Ksara boasts Lebanon’s oldest vineyards, though winemaking in the country dates back 5,000 years. I’ve had the chance to sip a number of their wines over the past two Wine Bloggers Conferences, and they are always eye openers, chockfull of unexpected layers that make me want to ponder them for a while.

The 2013 Reserve du Couvent is no exception. This syrah, cabernet franc, and cabernet sauvignon blend is full of tobacco, leather, dried violet, and lavender. With airing, a eucalyptus smell takes over the nose and brings chalkiness to the glass. Mulling over its complexities merely brings more; plum, persimmon, and kumquat take over when given time and the fruit brightens while the tannins soften.

I wouldn’t call it a balanced wine, but it’s definitely keeps my interest.