A Visit to Bella Grace Vineyards

Obligatory disclaimer: Everything consumed during this visit to Bella Grace Vineyards was free to me, including the companionship. 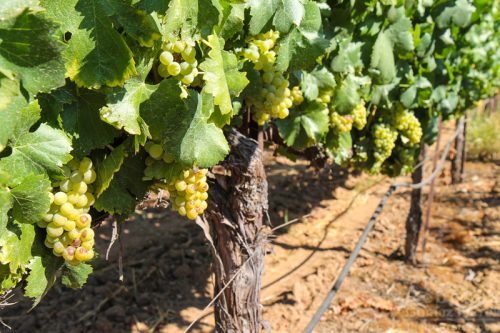 In August, I accepted an invitation from the Dallas Wine Chick to join in on a day trip to Amador County’s Bella Grace Vineyards along with a handful of other wine bloggers. 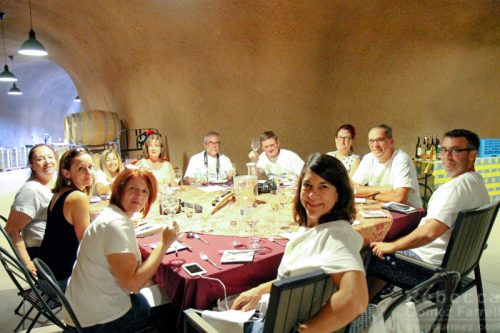 Our group was a lively one, and that included our host, Stephen Havill, a man with great sarcastic wit. Stephen’s the youngest of seven siblings, most of whom are involved in the winery in one way or another. Bella Grace is a combination of their grandmothers’ names, and their mother, Michael, is the winemaker of this vineyard in the Shenandoah Valley. She’s also very talented, as I would soon discover.

Cooling Down in the Bella Grace Wine Cave

We arrived on a hillside bordering the vineyards, where a wine cave had been dug out of schist rock.

It’s currently used as Bella Grace’s tasting room and the destination for wine pairing dinners, though plans are under way for a larger visitor center in the future. There’s something inherently appealing about walking into a wine cave, no matter the temperature outside. 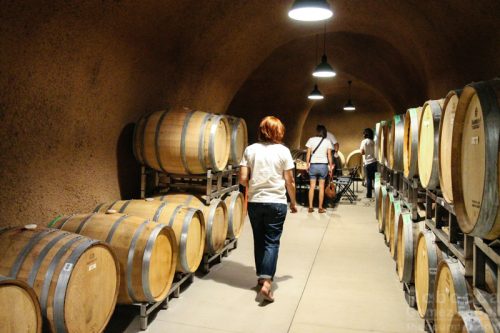 On a warm summer day, the cool cave temperature was especially welcome. As was our opening glass of 2015 Vermentino ($25). 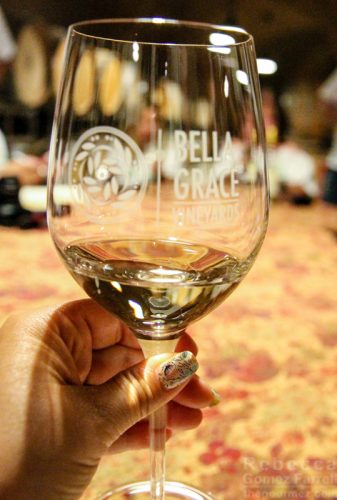 Acidic and buttery elements intermixed beautifully, allowing the crème anglaise, honeydew, green apple, and meringue puff notes to reach their potentials together. It was followed by the 2015 Grenache Blanc ($25) as we listened to Charlie, chief grower and patriarch, talk about the vineyard’s history. 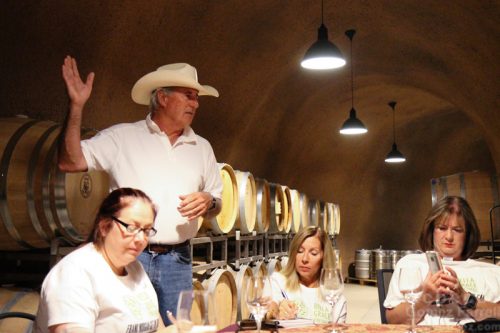 Charlie Havill and note-taking bloggers, Liza of Brix Chicks , Cyndi of Grape Experiences, and Amy of Another Wine Blog.

The grenache blanc came off fresh as mineral water, complete with lime squeezed into the glass. That makes it a dangerous wine – goes down too easily! I took two bottles home. 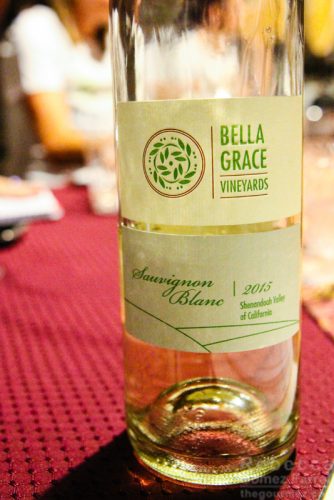 The 2015 Sauvignon Blanc ($20) was a cloud of peach blossoms. A purchase buys a spectacular nose and sparkly finish.

After those sips of white wines, a few of us were sufficiently cooled off to venture back into the outdoors, where Jess Havill, director of sales, took us on a stroll through the vineyards. 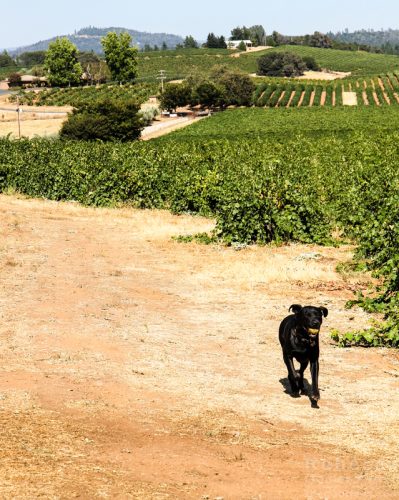 Jack, one of the vineyard dogs. 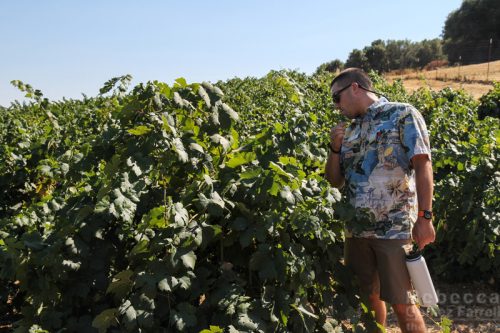 We made our way through rows of chardonnay, grenache blanc, semillon, roussane, zinfandel, tempranillo, pinot noir, and barbera, plus a few varietals I’m sure I missed. 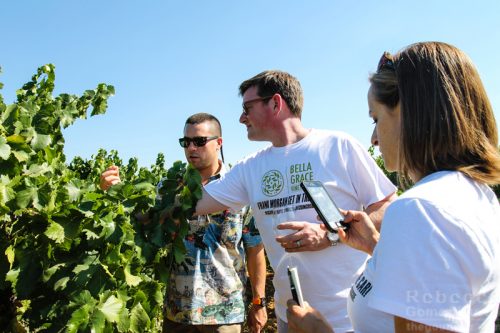 We entertained ourselves with tasting grapes, guessing which would be the sweetest and most appealing for snacking at that time of the year. I think pinot noir won best all-around, though chardonnay was close. But soon, it was time to bid the vines adieu and bid our wine pairing dinner hello. 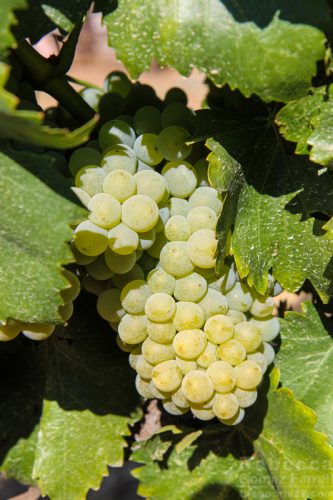 Goodbye, grapes! I’ll meet you in the bottle.

Bella Grace offers two level of wine club membership, and the upper level, Club 24, includes an impressive enticement—one private, annual wine pairing dinner for up to nine friends! What?! A meal of that type can break the bank, making this an amazing steal of a deal…especially since Robert Havill acts as chef. 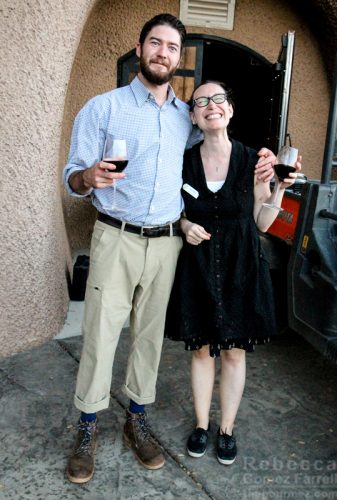 Robert and his assistant for the evening.

The food is catered by one of nearby Sutter Creek’s fine-dining restaurants, where Robert used to work. He takes their ingredients and finishes off the dishes with inventive style and well-considered combinations. Robert is as talented in the food department as his mother is in winemaking.

But before we dug in, it was time for a wine bloggers’ special event—watching Jeff Kralik attempt to saber a bottle of Bella Grace sparkling wine. It’s worth relieving past attempts by the Drunken Cyclist to realize how integral his attempts have become to the wine blogging experience. His first try this evening used one of these Menagerie stainless steel wine pourers sold at the tasting room. 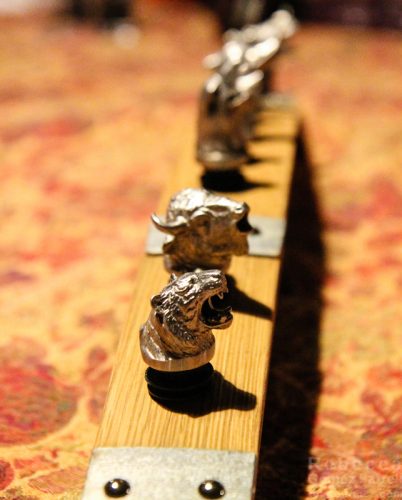 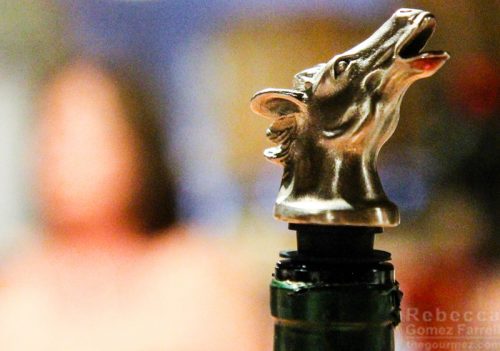 I adore those wine pourers. ADORE THEM. So much that you should not be surprised if they start making appearances in my posts once I get my hands on one. Jeff, however, did not have success using them to pop the cork– 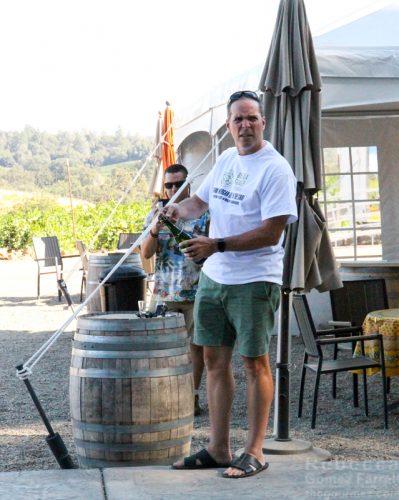 –so he moved on to a small cordial glass, and after that a large glass lid. 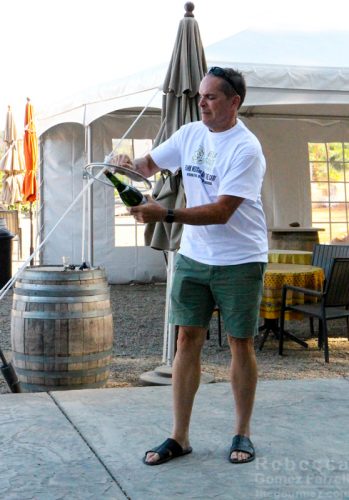 And failed. Then finally, the old trusty wine glass. 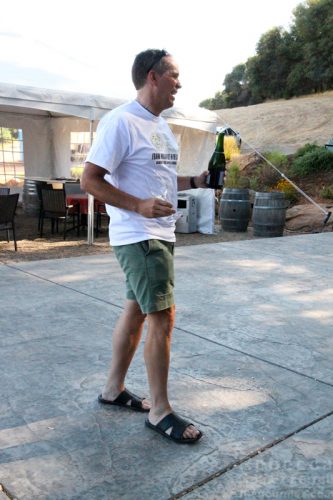 Success! The Bella Grace sparkling wine is a combination of chardonnay and pinot grapes, and it makes for a crisp and light bubbly to keep on hand. Quite refreshing, once Jeff finally did his job and opened that bottle. 😉

Our plates contained multiple takes on a course, meant to complement and contrast with each other and the chosen wine pairings.  The first one was cucumbers dotted with Bella Grace’s raspberry and mango vinegars, which are also sold in the tasting room along with a line of olive oils, most notably the estate blend made with three types of olives grown just across from the vineyards. 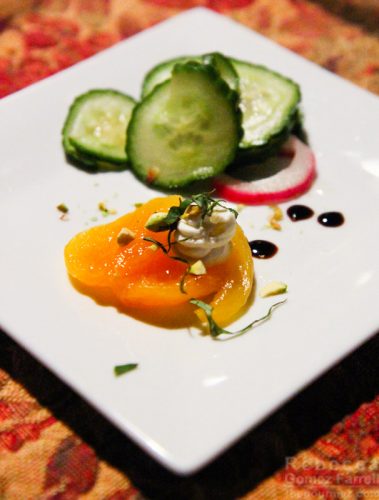 The apricot, pistachio and what I think was chevre impressed me most on that plate. So simply done and so perfectly paired with the highly fragrant 3 Graces White ($23), made from a blend of grenache blanc, vermentino, and roussanne. Even before I took a bite of the food, I smelled cucumber and apricot in the wine, so it couldn’t have been better matched. The 2013 Roussanne ($25) didn’t go quite as well with the mélange of curried yellow squash, Kalamata olives, macadamia nuts, and curry aioli that came next. 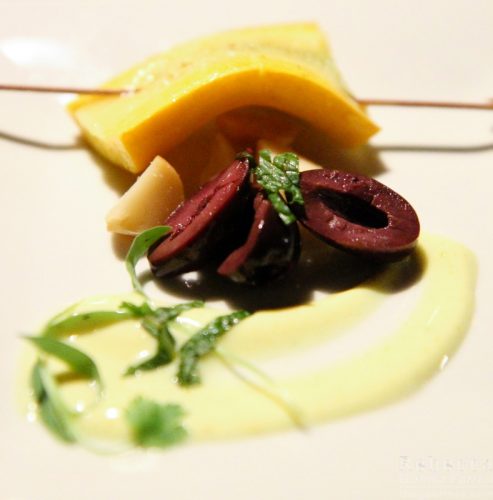 I enjoyed the roussanne’s tropical notes, with banana and a Crenshaw melon that settled into a less powerful Santa Claus melon as time passed in the glass. Clay and granite notes pleasantly dominated; they just didn’t combine that well with the course, for me. Both were great on their own, and it’s the only pairing that didn’t hit the mark out of five (5!) courses. 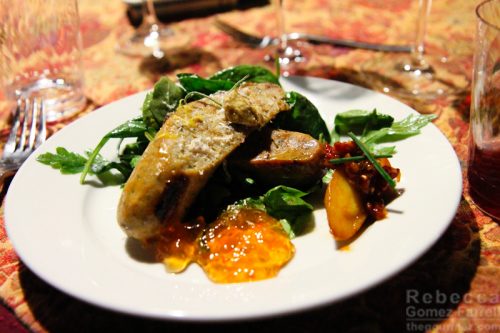 Ah, time for meat, and thus, time to transition to reds. The lamb, chicken, and parmesan sausage with pepper jelly and bacon jam on a potato slice was a combination of inherently strong flavors. Perhaps as a reflection of Robert’s talent, the simple salt and pepper seasoning on the arugula and spinach salad made it stand out the most to me — or I just like my veggies. Great dish all around, and it was served with their earthy, restrained 2013 Old Vine Zinfandel ($28). 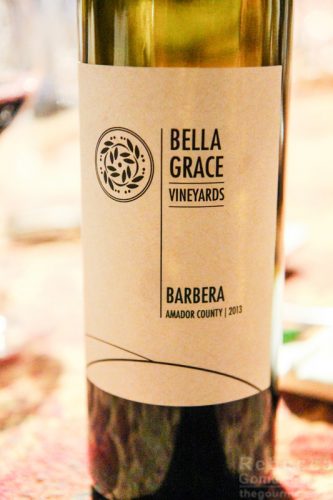 The 2013 Barbera ($30) is a super smooth show stealer. Many layers of flavor are blended within it, including violet, juicy plum, and black cherry notes that demand notice with a soft knock. There’s a reason Amador County takes home 80% of the wine medals for barbera in the state when it only grows 5% of the grapes, as Stephen shared. The wine was an excellent companion to pulled pork dotted with olive tapenade and served beside fig jelly on manchego cheese. 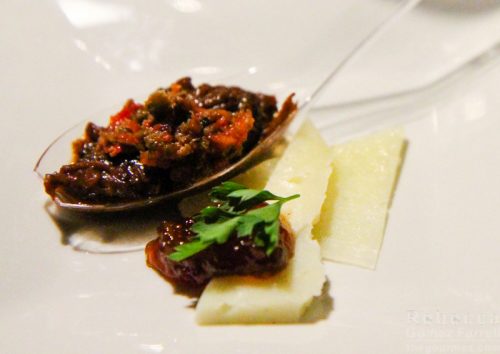 The barbeque sauce’s sweetness and fruitiness tasted amazing with the wine’s enhancement, and the manchego brokered an unexpected camaraderie between the flavors.

The barbera also went super well with one of dessert’s three offerings. 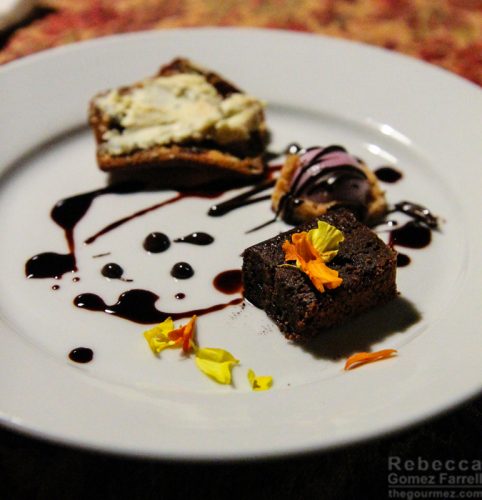 The lavender panna cotta in the middle of that plate, served on a crust reminiscent of shortbread cookies, was a natural pairing with the barbera’s floral prowess. The dark chocolate drizzle threated to overtake the panna cotta on its own, but with the wine by its side, that panna cotta stood up for itself.

The wine intended for pairing with this plate, however, was the 2013 Tempranillo ($28), an unusual choice for an ending wine. 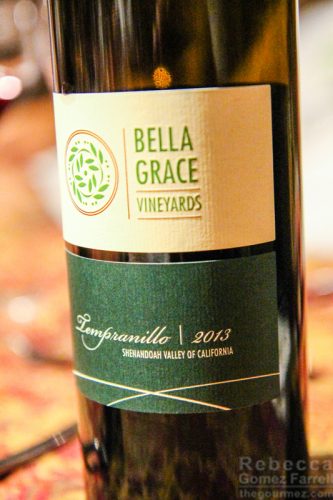 It worked because this tempranillo differs quite strongly from the typical profile, with little spice and smokiness and a lot of appealing cocoa. Blood orange and Queen Anne cherries came to mind, and it finished very well.  Both the brownie, sprinkled with marigolds, and the blue cheese-laden cracker brought out different sides of the tempranillo’s pairing potential.

Wow. What a wonderful feast we had of masterful wines with unexpectedly delightful pairings…and all in a wine cave tucked into the beautiful Shenandoah Valley. Stephen and the rest of his family made a Bella Grace believer out of me, and I look forward to visiting again, hopefully sooner rather than later.  It’s a standout, great-value winery of, well, beautiful grace evident in the winemaking, the views, and the pairings.

6 thoughts on : A Visit to Bella Grace Vineyards