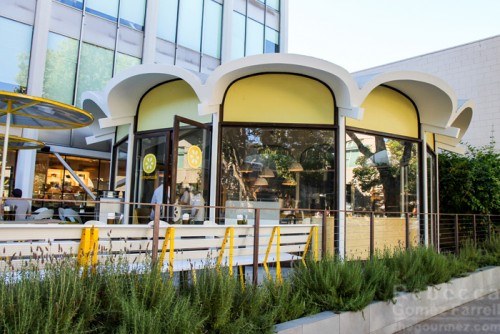 Northern Californians have never had a better reason to welcome a southern invader. By southern, I mean Southern Californian, of course, as Lemonade is a SoCal cafeteria chain with 23 locations. Those have all been concentrated in Los Angeles, San Diego, and Orange counties before now, but the Bay Area has six Lemonade openings slated for this summer, with two shops already open. All this just in time to enjoy the introduction of their summer produce-inspired dishes! 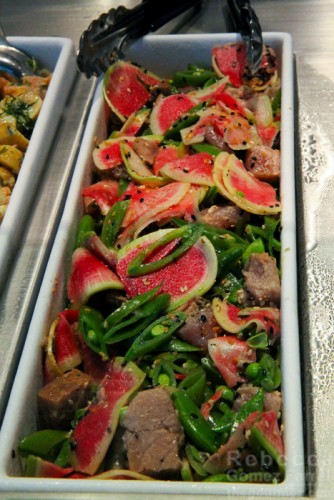 And I do mean enjoy. The Yerba Buena location has been open a few months, and last week, I was invited out for the opening party for Palo Alto’s shop at 151 University Drive, right in the heart of the downtown retail district. 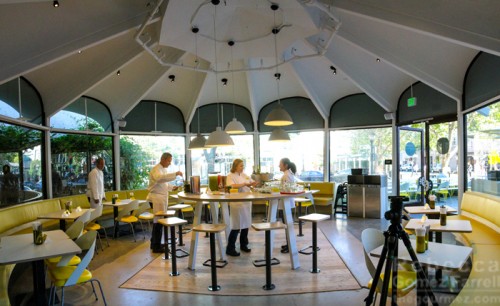 When I lived on the East Coast, I endured years of my SoCal friends and family telling me how great Lemonade is, and when I tried it myself on visits, I agreed wholeheartedly. Lemonade prides itself on using local sourcing and inventive recipes to reinvent the concept of a cafeteria–there are no forgotten pieces of dry chicken dripping oil under warmers here. 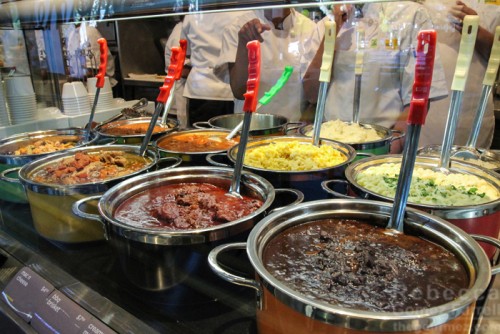 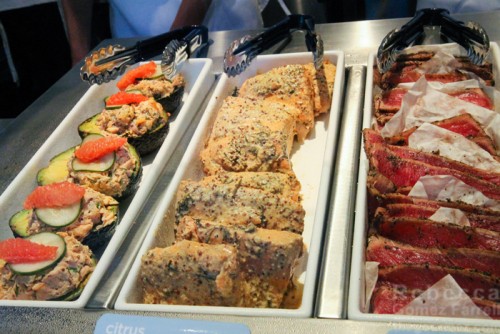 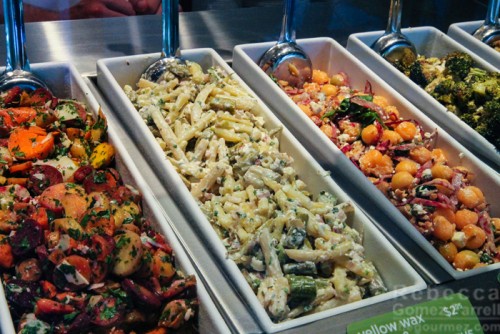 Quite the opposite in fact. And if you can believe it, it’s even affordable! But it is a little confusing, so let me help dispel that for you. Walk inside a Lemonade, take a look at everything on display to make your ordering game plan, ask for samples if you’d like, then jump in and out of the line to pick your choices.

The different sections of Lemonade’s wares are clearly marked with overhead signs, and you decide what speaks to you. Two Marketplace Vegetable sides combined with a Hot Dish? Go for it. A Sandwich with a full Leafy Green salad? Go for it. A Land & Sea filet, a Hot Side, and Dessert? All the way. Sides run from $2 to $4 and meat/sandwich items from $5 to $10. Don’t forget to add a $3 lemonade at the end! 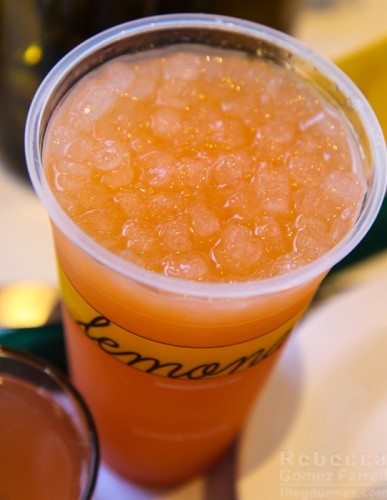 I tried the cucumber-mint and the pictured carrot-ginger lemonade during the opening party, and they are solid choices. The cucumber-mint blew me away with the sheer amount of cucumber flavor they managed to extract. If you’ve followed my cocktail reviews over the years, then you know cucumber beverages are a personal favorite, but I’m often disappointed with how little cucumber flavor actually makes it in. This lemonade hits the highest notch possible. The carrot-ginger lemonade was much tastier than a V-8, and easier to drink, avoiding the pulpiness common to carrot elixirs. 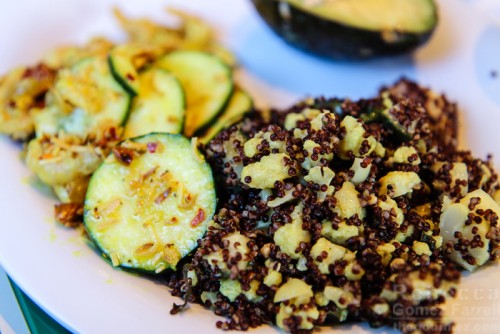 My plus one, Friend #1, enjoyed the red quinoa salad, the salmon louie-stuffed avocado, and the Canadian bay shrimp and sweet corn. The quinoa included curried cauliflower, tangerines, cucumbers, mint, and peanuts and was cooked just enough to retain a crunch. She thought the ratio of sweet to savory elements was great. 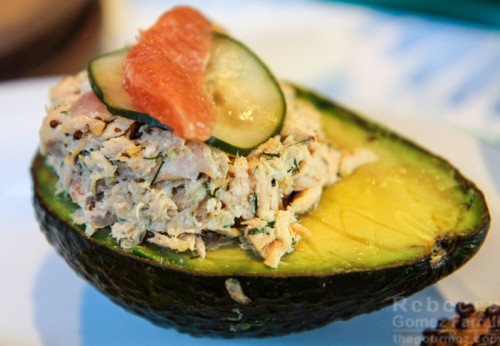 She loved the avocado dish, finding the buttery richness of avocado balanced out the saltier salmon filling with finesse. A sample of the traditional mac & cheese made her think it wouldn’t pass the toddler test, being mushier than her son likes. It neared the top of maximum cheese capacity.

No, I didn’t comment on her Bay shrimp side yet, because I also had it and it was hands down my favorite item on my plate. 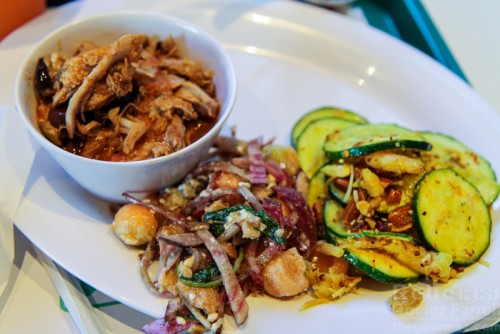 The zucchini and shrimp, both cooked just to tenderness, were tossed with a collection of spices, nuts, and coconut that approximated Punjabi street snacks. In my humble taste buds’ opinion, it elevated those snacks with the utter freshness of its ingredients and restraint in seasoning use; note, that is no slight against the snack foods, just a comment on the difference between dried, bagged treats and a fresh dish. YUM, either way.

Lest my readers question my objectivity, I think the honey kiss melon and chiogga beet side, pictured in the middle, needs some work — and I LOVE beets. Don’t get me wrong, if you love blue cheese, you’ll love this dish. The problem is that the cheese dominates because the melon and beet are mild in contrast. I’m not sure if that indicates a need for riper melon and thicker beet slices, but I think simply reducing the amount of cheese would go a long way toward improving it. The fresh hazelnuts were awesome.

I was also pleasantly surprised by the Basque chicken, on the left, which I went for even though I’m not an olive fan. But I wanted to try a hot, braised meat dish and I’ve had the red miso short ribs before and oh my god, EAT THOSE NOW. As for the Basque chicken, the olives lent just enough salt to please without making my nose wrinkle in annoyance, as it’s usually their brine that turns me off. The chicken was super moist, and I cannot stress enough that I didn’t mind the olives. That’s a feat.

Most of the items I’ve mentioned are part of Lemonade’s new summer menu, which means you may not have access to them year-round, and that Bay shrimp dish and the red quinoa are ones you don’t want to miss. But I can confidently say, despite only having a sample of it, that the Chinese long beans with summer plums is another standout summer offering. 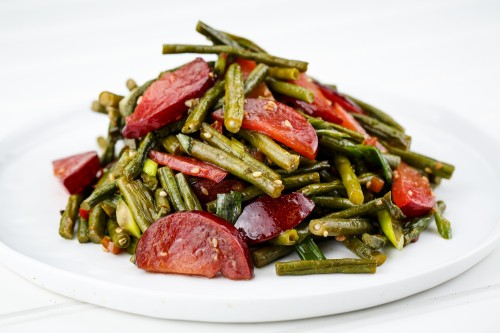 I wouldn’t have thought of that combination at all, but the expertly roasted beans went so well with plums and a subtle-for-hoisin vinaigrette.

Lemonade makes many different types including blondie brownies, cupcakes, and the Pick Me Up mini-trifles that just made their debut with options like strawberry s’mores and mint grasshopper pie. We went with chocolate hazelnut and caramel fleur de sel macarons. 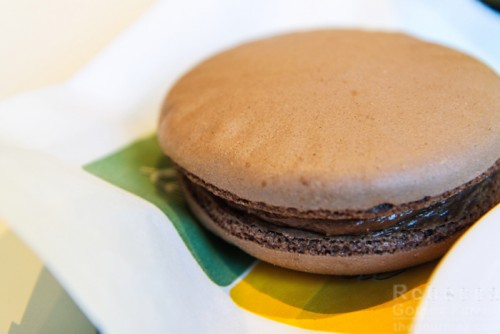 That’s palm-sized, folks! Giant! Friend #1 thought the cookie texture was closer to cake than macaron, but I thought they approximated macaron’s standard flaky, light texture pretty well, though they were on the moister side of the spectrum. The fillings are buttercream frosting-based and thicker than you’d find in other macarons. I did not expect the rush of cinnamon flavor in the caramel one, though I liked it. I’m still trying to decide whether that’s what made me taste an apple presence or not. Yet my husband had my second half and asked right away if it was apple, so I think caramel apple may be correct. Friend #1 did no sharing with the leftover half of the chocolate one she took home.

Whew. We managed to try a lot in one night, didn’t we? In case it’s not obvious, I love Lemonade, and I hope the Bay Area will enjoy them just as much as I do. Thanks to the company for the invite to the Palo Alto opening party, and I hope you find success in this northerly region!

Obligatory disclaimer: I paid nothing for the food and drink mentioned in this review.