An Intro to Henry Matthes Vineyards 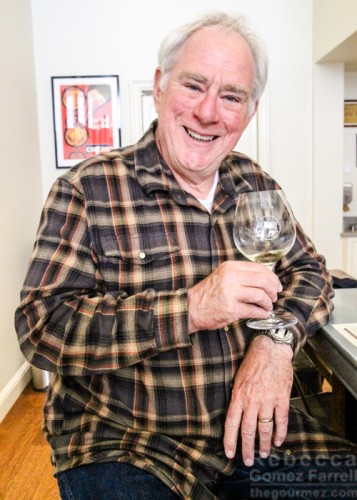 I met Henry Matthes, a winemaker and grower, at a party for our mutual friend, Peter Nowack, founder of OneGoodDay.Org, a nonprofit that funds microgrants for people with terminal illnesses to see their family and have one last good day together, whatever form that may take. Peter has been in the Bay Area wine scene for quite some time, so it follows that a good many of his friends are also in the wine business. Henry is no exception.

In fact, make him the opposite of an exception. Henry is a man so in love with the wine business that nearly twenty years ago, he bought a home in Sonoma to jumpstart a transition to the wine life from a successful career as a salesman. And not just any home, but a beautiful house situated on an acre of grapevines.

The fruit itself rests on a third of that acre, numbering 680 vines — as Henry said, you can almost give each of them their own names! That may not seem like much fruit to play with, but Henry has been successfully selling his for years to Sonoma area winemakers. The other nearby houses are also micro-vineyards, all originally planted together as a single orchard. The land was developed into seven properties, and Vic McWilliams, formerly of Castle Vineyards and Victor Hill’s current winemaker, laid out the vineyards surrounding the homes now. 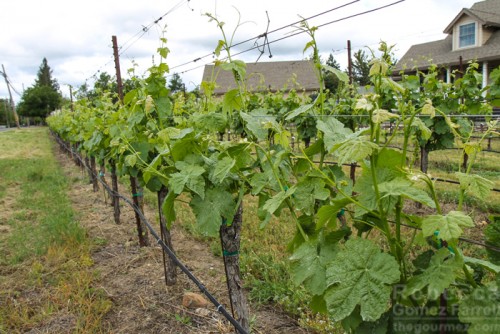 Henry has the southernmost property, which makes for great Rhône grapes and a nice backyard flower garden. 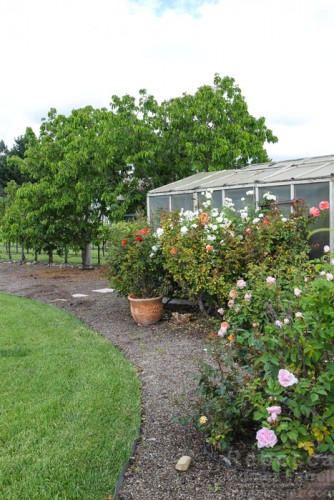 McWilliams convinced Henry and the other property owners that they should focus on Rhône varieties after the price of merlot fell, so marsanne and grenache blanc become the standard bearers of Henry Matthes Vineyards. Henry was also keen on the idea because he was tired of seeing Rhône grapes used in yet another California chardonnay blend rather than highlighted for their own qualities. Tablas Creek’s style of winemaking has especially inspired him, and thus, Henry decided to make wines that pleased himself most of all.

Henry sold his fruit only to others until 2004, when McWilliams did a custom crush of merlot in a traditional Bordeaux style — which ended up being the wine shared at Henry’s daughter’s wedding! A few cases of the 2006 merlot, another custom crush, is still hidden and treasured in Henry’s collection. Then came the switch to Rhône grapes and a couple of years after that, Henry decided he wanted to have a stronger hand in the blends featuring his grapes, so he decided to take a stab at winemaking himself. He is currently producing 100 cases of estate-grown grenache blanc, though that number should increase soon. The wine just made its first restaurant wine list! You can find it on the menu at the Girl and the Fig at $60 a bottle. 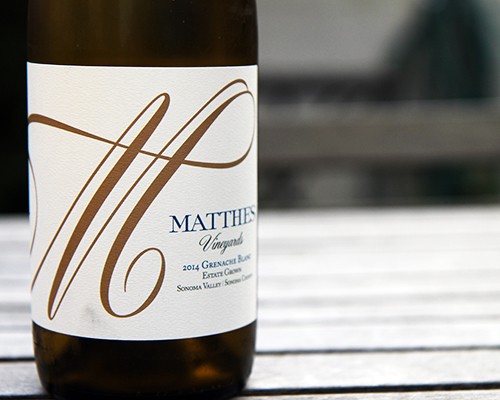 Though I sampled a glass at Peter’s party, I didn’t get a chance to really taste Henry’s 2014 grenache blanc until recently. One sip transported me to a cabana’s pristine beach. The nose was light, but the taste gave lots of lemon in a creamy, genteel way like a helping of bonbons to finish off an afternoon tea. Well-balanced acidity brought mandarin oranges to mind: you know they’re acidic, but you only register the pleasing sweet. 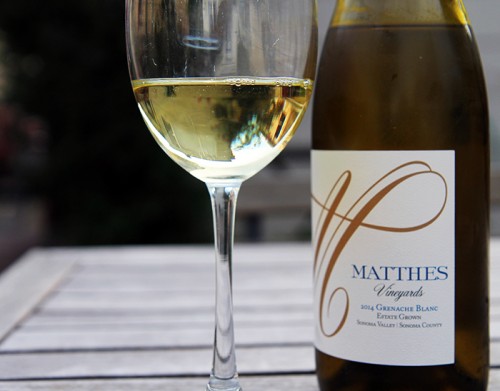 Here is my Quini profile of the wine:

On my rating scale, that earns an

Thank you, Henry, for the tour of your big little vineyard and property and the bottle of wine to try out! Next week, I’ll share his recommendations for a Sonoma afternoon well-spent. For now, enjoy these Rhône beauties just about to bloom. 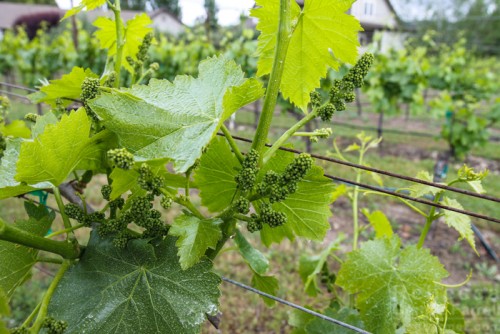 3 thoughts on : An Intro to Henry Matthes Vineyards