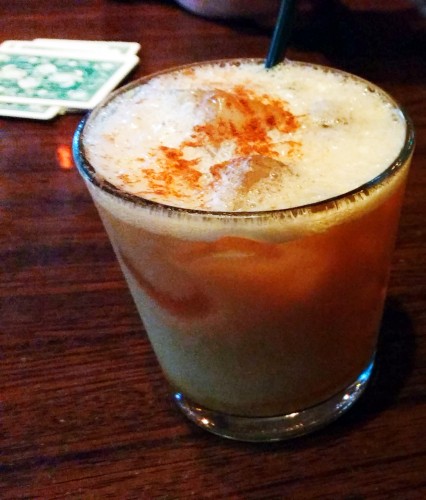 It can be difficult to create a new — and successful — coffee cocktail. Recently, I came across an attempt at San Diego’s Neighborhood in the Gaslamp Quarter. Neighborhood is an appealing, hipsterish pub with dark wood tables, a well-thought-out spirits and tap list, and plenty of classed up American comfort foods. It’s casual enough that patrons felt comfortable working on laptops there into the Happiest of Hours.

The challenge in making coffee cocktails is twofold. By far, the hardest part is balancing the acidity of the coffee against the heat of the alcohol. Secondly, attempts to move beyond dessert cocktails, by which I mean relying on sweetness and cream, are rare. Of course, I love dessert cocktails, but for coffee drinks, it’s a box they are so often pushed into even when alcohol is not involved. C’mon folks, you know 90% of the drinks offered at any coffee shop are full of more sugar and fat than a morning danish.  And danishes have a LOT.

Thus, I applaud any bar that ventures beyond the white russian and the espresso martini in their coffee cocktail experimentation. Neighborhood’s R & R Coffee Cocktail is one such example, and as I saw it on the menu while in need of caffeine…but also on vacation, so alcohol was on the agenda. The drink’s made with cold brew coffee, stout beer, a little cream, and a splash of Ballz Deep, a charmingly named cocktail on tap at the restaurant. I’m not yet sold on the benefits of tap cocktails, having enjoyed one and loathed another at Mason Bar in Arroyo Grande, but Neighorhood’s draft wine on tap, the Hahn GSM, was pretty great.

Although this has the softness I associate with draft #wine, and I prefer my wine to make an entrance, this one wins me over with its complexity. It slips into the stable, quiet enough to leave the horses undisturbed. A deeper, more complex, merlot-like spice and fruit combination is released, with hay, dust cherry, and bay leaf. Enjoy the majesty beheld in a simple tail swish. – Hahn GSM Draft – California – 4/5 _____ #winelover #winereview #tastingnotes #tasting #CAwine #redwine

So I deemed a cocktail containing Ballz Deep worth the risk. Ballz Deep is “fireball bourbon” made in-house with a “cinnamon spice bomb” that the menu calls sweet, spicy, and a little offensive. For flavor, it was the R & R’s primary contributor, and that was a good thing. I’d say it added a bit of Goldschlager’s appeal and profile. The coffee and stout could both have had stronger presences; I’d venture to say this drink might be better without the cream at all. But I did appreciate the mild sweetness the stout contributed to the mix. I’d just have liked more of its maltiness as well.

Was it a great coffee cocktail? Nah. It was just alright. But among the paltry offerings in this category, alright is pretty good.

One thought on : The R & R Coffee Cocktail at Neighborhood