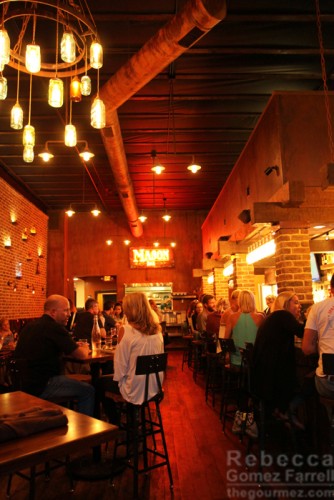 Mason Bar, an upscale cocktail bar in Arroyo Grande Village, is where Friend #1 recommended we go for nightcaps after trying out the pescatarian options at Ember earlier that evening. Without a doubt, Mason Bar’s single greatest asset is that it opens to the street, providing excellent views of strolling pedestrians and the occasional joyriders. The warm tones of its wood and brick interior contribute to an inviting atmosphere.

Mason Bar has a large selection of draft beers and many wines by the bottle, but what drew my eye were their barrel-aged cocktails. No, folks, I do not simply mean the spirits are aged in barrels. The entire cocktail is! At my visit, a Four Roses manhattan, New Amsterdam negroni, 1776 rye boulvardier, and maple old-fashioned (also with Four Roses) were the barrel options.

How could I resist? I opted for the boulvardier ($13).

You can definitely taste the oak barrel in these cocktails. It softened the rye’s heat and the bitterness of the Campari. The vermouth’s sweetness and vanilla was heightened, which worked well to offset the Campari. A good, intriguing drink, but I’m not sure I’d call it better than a regular boulvardier. Just different.

Friend #1 did not have a great experience with the negroni. I didn’t try it, but Friends #1 & #2 both did and concurred that it was not a good result. I surmised that perhaps the aging heightened the Campari’s bitterness in that cask unlike in my own. Or maybe gin just doesn’t mesh as well with Carpano Antica and Campari over the long run as rye does.

Friend #2 ordered a cheese plate, and it was beautiful. 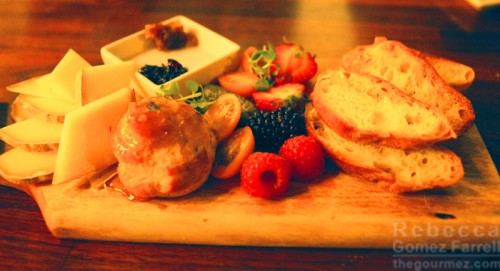 The savory profiterole in the forefront of that picture was quite unique. Before we knew it was a profiterole, I was thinking of it as a gougère with a sweet, creamy quality. Worth trying for sure! Mason Bar also has plenty of other nibbles—the lobster corn dog and smoked rib mac & cheese have my eye for future visits.

I decided I needed two nightcaps and went in for the Village Idiot. 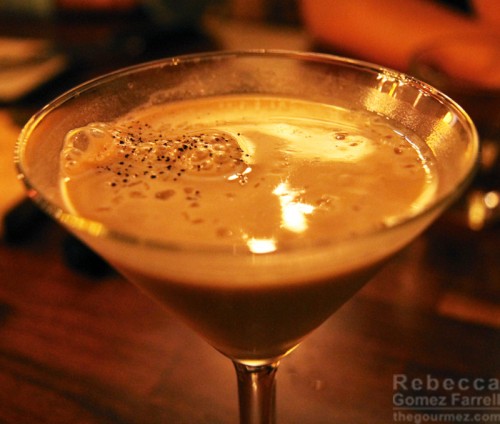 It has RumChata, 151 rum, and St. George’s NOLA coffee liqueur. Each of those ingredients is one of my favorite things, which means I have a lot of favorite things but also that those particular liqueurs have already proven their worth to me. And who doesn’t like a splash of Bacardi 151? They yielded just the tasty, smoothly sugary, and slightly creamy ending I craved.

I applaud Mason Bar’s atmosphere and their sense of experimentation, though the experiments don’t necessarily yield genius. But they do generate interest—my interest—regardless! Plus, in my ongoing battle against the omnipresence of mason jars as decorative glassware, I was relieved none of our drinks were served in one despite the establishment’s name. They almost got bumped up a rating just for that—almost.

One thought on : Mason Bar