I hope it’s been a pleasant Saturday for you so far, readers. This is just a quick note to let you know that I’ll be participating in the Finger Lakes Wine Alliance’s launch of their 2013 Reislings in a short 3 hours from now, from 7 to 9 PM EST, which is 4 to 6 PM PST for those of you West Coasters who can’t do the math.

I’ll be tasting along with the 50 other media members participating in this live social media event. You can find us in two places: at the hashtag for the event on Twitter, #FLXRiesling, or over at the Finger Lakes Fans’ Facebook Page. I’m going to try to keep an eye on the happenings both places, but Twitter’s my social media forte, so you can definitely follow my thoughts there or in my own Twitter stream @theGourmez.

What will I be tasting? Four different 2013 rieslings with an emphasis on dry offerings–and yes, these are wine samples provided free of charge (disclaimer!). 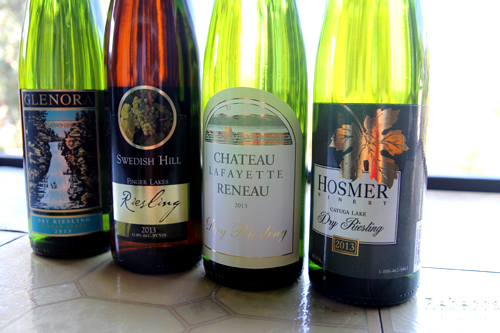 This event is doubly, no, triple-ly exciting for me because I’ll be attending next year’s Wine Bloggers Conference located in the Finger Lakes (I won Quini’s Grand Prize!) and I have very little experience with Finger Lakes wines in general. I admit to some reticence. Sweet wines have never been my favorites, and rieslings have a reputation for sweetness. The rieslings I’ve ranked above average (Schloss Biebrech Sekt, Buitenverwachting Rhine) have been largely sparkling. And the last riesling I rated that well was four years ago (Lindeman’s Bin 75)!

But I’m always ready to be surprised, and that half the wines we’re tasting are specifically cast as dry gives me hope. See you on the interwebs soon, fellow riesling explorers! I’ll be sipping from my beautiful balcony facing the Bay. Okay, I can only see an inch of the Bay, but it’s all part of setting the mood, right?