Readers, I know I’m not in North Carolina anymore (though I will be in Raleigh the weekend of 9/13–let’s get together, locals!), but I had to make sure you knew that tickets for Chapel Hill’s TerraVita went on sale today. Why? Because TerraVita is an amazing conference focused on food, drink, and ways to enjoy them sustainably, a cause I couldn’t support more. 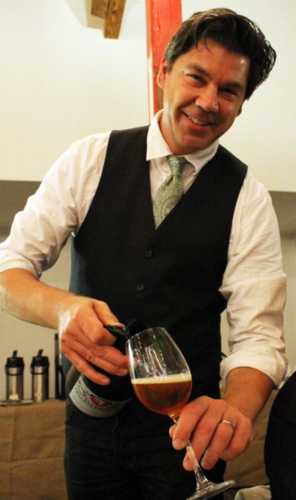 Sean Lilly Wilson pouring out some brew from Fullsteam at the 2012 East Meets West dinner.

I’ve had the pleasure of attending twice in its five-year history. It’s been amazing since Year 1, really, but the festival stepped up its game when it added on the Sustainable Classroom, two days of workshops offered by local and national chefs, baristas, writers, owners, and producers that all tackle the appreciation of food from the perspective of how to keep the industry sustainable so we can keep on appreciating that food forever. 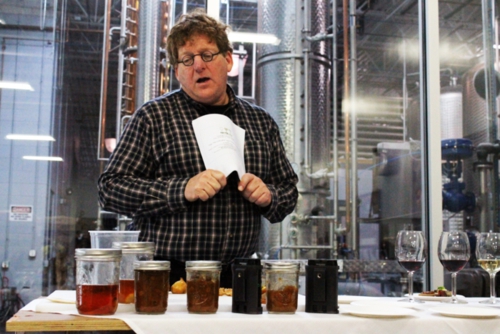 Bernie Hermin showing off his pickled fig collection in 2012.

New this year, TerraVita is hosting the premiere of A Chef’s Life Season 2, the Peabody-winning PBS program based on the day-to-day life of Chef Vivian Howard of Kinston’s Chef and the Farmer restaurant. And the number of special dinners that the 3-Day pass offers is blowing my mind. I wish I could be at each one! 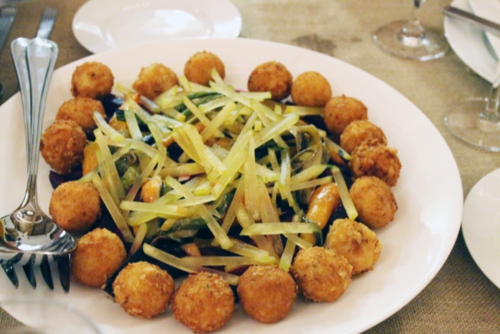 I’m copying over the press release for you now, because the whole thing is making me jealous of those of you who plan to go. I encourage you to buy tickets for at least one event if responsible food consumerism is your passion. You can do that at their website, right here.

[Chapel Hill, NC, July 8, 2014] – TerraVita Food & Drink Event (www.TerraVitaEvent.com; October 9-11, 2014; @TerraVitafoodie) – named one of the “10 Southern Food Festivals You Need to Taste” by The Atlanta Journal-Constitution and “4 Can’t Miss Southern Food Festivals” by PeterGreenberg.com – has earned its reputation as a premier culinary event in the Southeast because of its devotion to highlighting local and sustainable food and beverages of superior quality. “In honor of our fifth year, we’ve taken the festival to a new level. This year we’re honored to host the North Carolina premiere of the second season of the award-winning PBS series A Chef’s Life, with Chef Vivian Howard – a longtime TerraVita supporter,” said Colleen Minton, the festival’s founder and director. Additional dinners, tasting events, educational classrooms, after parties, chef demos, and a special 3-day pass have also been added this year. Tickets for all festival events go on sale July 20, 2014, on the TerraVita website at www.TerraVitaEvent.com

For the first time TerraVita is offering a limited number of 3-day passes for $425- The Whole Shebang -providing access to exclusive events. The pass includes admittance to three private, non-ticketed events and parties, including an intimate afternoon event at [ONE] restaurant in Chapel Hill with Chefs Kim Floresca and Daniel Ryan and two additional North Carolina chefs – Vivian Howard from Chef and Farmer in Kinston and Scott Crawford of Standard Foods and Nash Tavern in Raleigh. Also included is a hands-on bread baking class led by Lionel Vatinet of La Farm Bakery and author of “A Passion for Bread: Lessons from a Master Baker,” and a special TerraVita After Party at The Black House at Straw Valley in Durham with Master Sommelier Fred Dexheimer and Chef Adam Rose.

The Southern Harvest Dinner on Thursday, October 9, will bring together chefs and producers from across the Southeast for an outdoor feast at Southern Season in Chapel Hill. Chef Kevin Johnson from The Grocery in Charleston, SC, and Weathervane chef Spencer Carter will collaborate with Border Spring Farms’ Craig Rogers and his grass-fed lamb for a casual dinner paired with craft beers, sustainable wines and live music. The cost of each ticket will be $85.

Following the Southern Harvest Dinner, the North Carolina Season Premiere Party for A Chef’s Life on October 9 will bring together the directors, producers, staff and stars of the show to celebrate the kick-off of the second season of the PBS award-winning series with family, friends and ticketholders. We’ll toast A Chef’s Life’s recent Peabody award – the broadcast equivalent of a Pulitzer Prize – and their nomination for a James Beard Foundation broadcast award.

“This will be my fifth year at TerraVita. It’s one of the rare food festivals that is about more than just having a good time,” said Vivian Howard. “I love the mission, the discussions, the people… and of course, the food.”

The Sustainable Classroom – a hallmark of TerraVita – introduces culinary workshops, food and beverage tastings, demonstrations and intensive panel discussions. Classroom sessions range in topic, but share a focus on sustainability and feature visionary producers, chefs, journalists and cookbook authors, including James Beard Foundation’s 2014 “Best Chef Southeast” winner Ashley Christensen of Poole’s Diner in Raleigh.  Participants may choose to attend up to three 1-hour and 15 minute classes, which take place Friday, October 10, from 9:30am until 2:30 pm; each ticket costs $60 and includes 3 classes.

The Carolina Table: East Meets West – TerraVita’s celebration of the rich culinary scene from NC’s coast to mountains – takes place Friday evening with a family-style seated dinner prepared by some of the most exciting talent in the region today. Chef Scott Crawford of the soon-to-open Standard Foods and Nash Tavern in Raleigh, Ben Adams of Piedmont in Durham, Matthew Dawes of The Bull and Beggar in Asheville are just a few of the chefs who will collaborate on a farm-to-table dinner, featuring the finest farms and artisanal producers in the state. Guests will dine with local food artisans whose cheeses, meats, artisan breads, brews and spirits will be highlighted in each dish. The cost per ticket is $100.

“We are grateful for the continued support from the community and beyond,” said Minton. “The Chapel Hill/Orange County Visitors Bureau, Southern Season, the NC Department of Agriculture’s Got To Be NC program, Mitre, and The Local Palate have supported the event in multiple ways and continue to encourage more growth and visibility each year to showcase the best our region has to offer.”

TerraVita culminates on Saturday, October 11 with the Grand Tasting on the Green, this year featuring live chef demonstrations for the first time, alongside tastings from 45 exceptional chefs & artisans from across North Carolina. Additionally, more than 100 sustainably-produced beverages from around the globe will be served, including organic coffee, biodynamic, organically-grown and natural wines, local microbrews and distilleries. Guests also will enjoy cookbook signings and intimate interaction with chefs, artisans and beverage producers from across the state. The all-inclusive ticket is $75; designated driver tickets are available for $60.

As in years past, TerraVita has set the additional goal of producing a zero waste event by employing the intensive use of compostable and recyclable goods and recycling nearly all of the waste produced at the event, made possible by a partnership with Orange County Solid Waste Management and Brooks Contractors, a commercial composting company located in Chatham County.