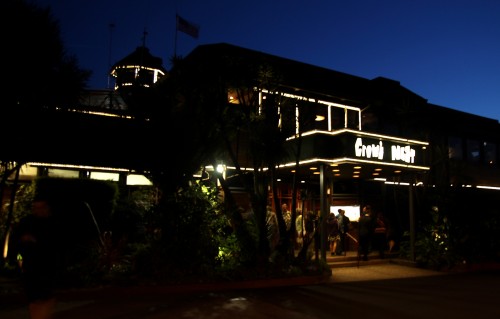 So I have a problem. And that problem is my high expectations for the finer dining in my beloved college town of Santa Cruz. As mentioned in my review of Star Bene, there are places in Santa Cruz that I only dreamt of on my student budget back at the turn of the millennium. Places reserved for dates or people who actually lived in the city during the summer. Places I sure never went.

(We’ll just pretend for a moment here that I didn’t spend every summer break in Santa Cruz, because I did, and that one boyfriend didn’t introduce me to one of my all-time favorite sushi restaurants, Mobo, on a date, because he did. Doing so will make my story flow better, mmkay?)

The Crow’s Nest was one of those places. I did meet a bunch of friends outside it once near Christmas, when we watched the harbor boat parade. And a couple of years ago, I enjoyed a rehearsal dinner there before a good friend’s wedding. But I had never dined there properly until three weeks ago. The best part of that dining experience? Probably strolling along Twin Lakes Beach as we waited for our 8:30 reservation. 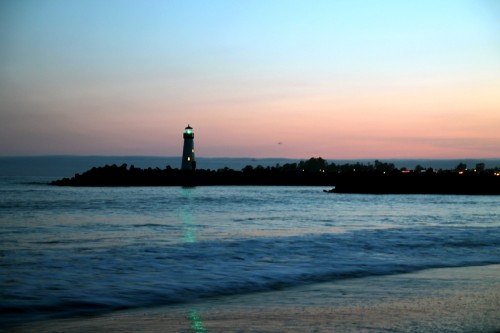 Okay, you can’t beat that view. I had the same one inside the restaurant, though it was night, so not much could be seen from the window. But I appreciated that we were sat at the window regardless. We were in the main restaurant, which is the formal spot for dinners whereas the Crow’s Nest also runs the more casual Breakaway Grill upstairs and the Beach Market grocery, pizza, and deli counter next door. Only the Crow’s Nest itself existed when I lived in Santa Cruz, and thus, nothing else would do. 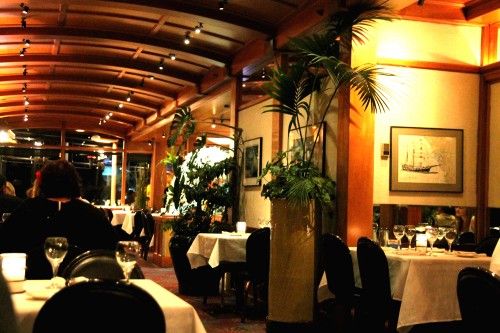 The restaurant is typical “big night out” with white tablecloths, medium-toned wood, dim lighting. It didn’t have much personality, though I imagine the ocean gives it plenty in the daytime. The blue-lit engraved glass panels around the entryway made it feel dated to me. 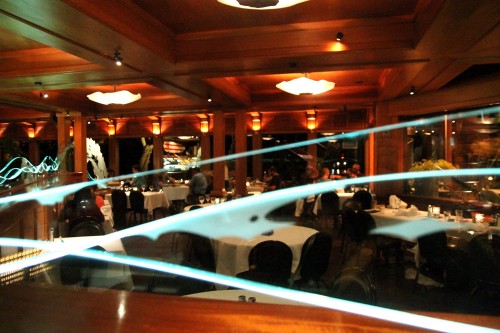 My cocktail, however, didn’t taste dated at all. 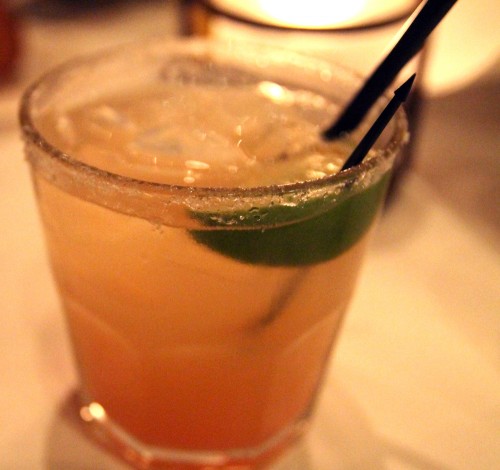 I opted for their guava rita, which is exactly what its name implies, guava juice mingling with Hornitos tequila and a good house mix. For my vacation mode, it hit the spot. Bread service was also good with sourdough and dark wheat rolls and whipped butter. Restaurants, I cannot stress how much more awesome you are to me if you offer whipped butter with or without herbs to enhance it. The ability to easily spread butter is a wonderful thing.

Also a wonderful thing was the way the crab and artichoke dip ameliorated my extreme hunger. I’d been wine tasting all day with little food; I needed something greasy to sop all that wine up! 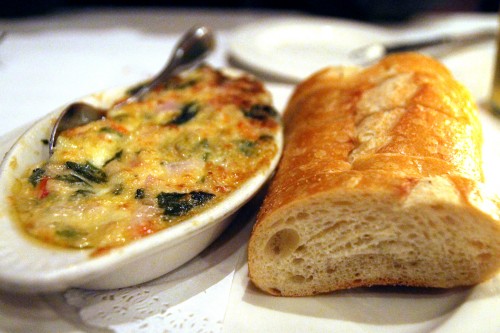 If I hadn’t been so hungry, the pool of butter at the bottom of the ramekin would have been off-putting, but I couldn’t be bothered to care right then. There was a good amount of blue crab, and the spinach and red pepper added needed splashes of color, though not much taste. The best part was the marinated artichoke hearts. Their vinegar tang provided a great contrast to the rich, creamy dip.

For his entrée, my husband had the broiled lobster tail, which looked much nicer than this photo conveys. 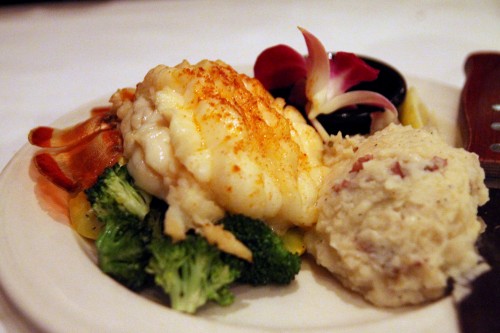 The lobster itself was good, but the sides were uninspired. Mashed new potatoes and steamed broccoli and zucchini? Really?  I mean, really? For a $30 plate? Look, mashed potatoes are delicious, and I am a fan of all things vegetable (let’s pretend mushrooms, olives, and beans don’t count for the sake of the narrative), but those were very simplistic preparations. And the vegetables were steamed too long and entirely flavorless.

(God, I’ve become that food blogger, haven’t I? The one who can’t appreciate the classics anymore? Or maybe I just know how much better vegetables can be when a little more care and imagination is used to prepare them? Yes, that must be it. I choose to believe the latter.)

My dish started out strong. It was mahi-mahi with a macadamia crust, coconut-lime cream sauce, and jasmine rice. 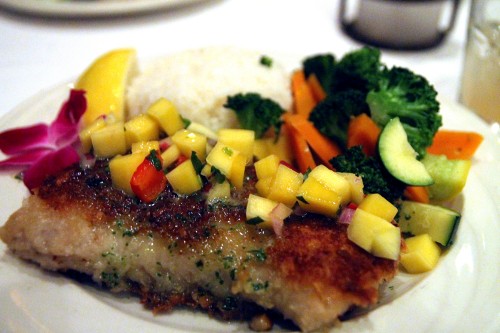 It’s on their seasonal specials menu, a full half of the menu that I assume changes every few months. My waiter recommended it. I adored that crust and the sauce that was barely creamy at all. Rather, it was a subtle presence that worked quite well with the onion-heavy mango salsa served on top of the filet. The fish was cooked through and tender, and I appreciated that the rice was simmered with coconut milk, giving it a little pizazz I didn’t expect. But about halfway through the filet, the macadamia flavor started competing with the taste of the oil from the deep-fryer. And the vegetables…well, you know my feelings on those.

The Crow’s Nest isn’t innovative enough to draw my interest again on its own, though I wouldn’t turn down a future visit if someone else suggested it. Using marinated artichoke hearts in the crab dip was promising, and I did enjoy those first few bites of my dinner and all of my drink. Perhaps sitting upstairs in the bar is the better bet? It’s a good restaurant, but could be so much better if they enlivened their sides and paid more attention to quality control.

My visions of amazing food in Santa Cruz’s upscale restaurants have yet to materialize, though it’s worth noting that the taquerias, sandwich shops, pizza joints, and ice creameries are just as good as ever. Maybe I need to do things the Santa Cruz way when I’m visiting and mellow out about the food, sticking to whatever spot is most convenient when hunger strikes. But I haven’t made my way through all those restaurants I dreamed about in my hammock, taking a quick nap between classes and shifts at the Westside Safeway. Maybe Shadowbrook won’t let me down?

2 thoughts on : The Crow’s Nest