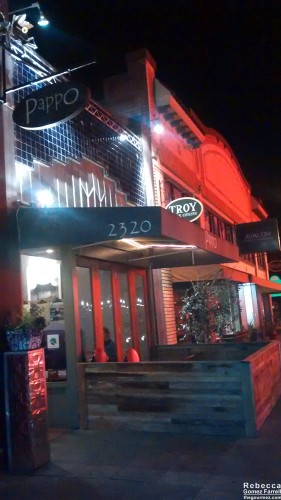 Being a relatively young foodie, my taste buds have grown up on Farm to Fork/Farm to Table/Nouveau American/New Californian/Californian or just plain upscale cuisine that uses products from local vendors and a blend of different styles that highlight the ingredients’ natural flavors. As expected, the Bay Area is swimming in options for that particular brand of cooking, but I’ve discovered that a plethora of offerings sometimes means a plethora of mediocre attempts at it. After a string of those, I was thrilled to stumble upon Pappo on a dinner and movie night with my husband.

The restaurant’s atmosphere is understated, just a mix of brick, leather, wood, and brown-gray walls adorned with blown-up pictures of water droplets. It was sleek and cozy at the same time with welcoming, speedy service from the servers and kitchen. 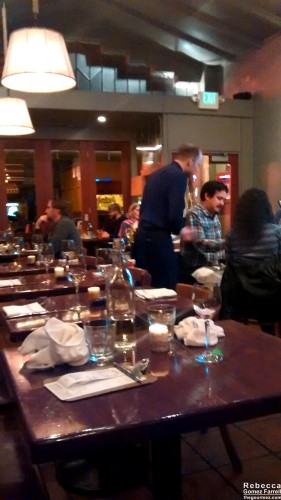 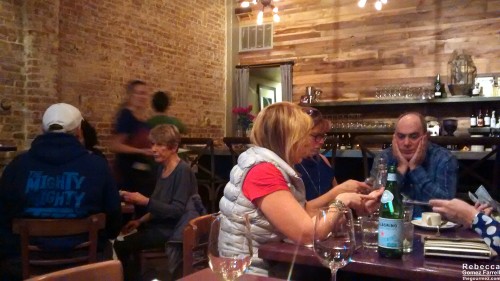 I don’t have the particulars of my husband’s meal, not having expected to do a review that evening, but it was essentially a duck leg from Liberty Ranch with roasted root vegetables and broccolini. 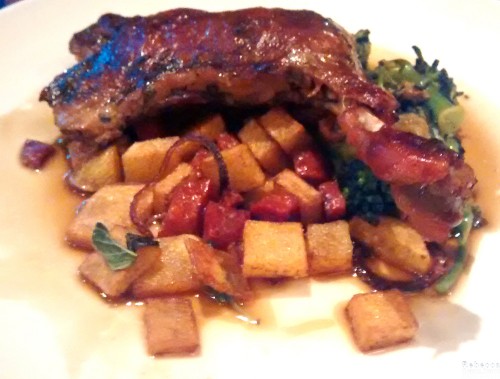 Insert my obligatory apology for fuzzy cell phone pictures here. The husband said the duck was good. I tried a bite of the vegetables and they were perfectly roasted, bringing out great flavor in both the starches and the broccolini. Whatever broth was served with them was exquisite.

My own meal was penne pasta bolognese made with ground beef from Prather Ranch, cream, Pecorino cheese, and fresh herbs. 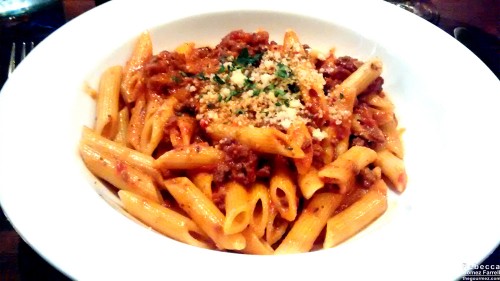 It wasn’t a revelatory combination of ingredients, but that didn’t matter — the bolognese was simply excellent. I would guess the tomato sauce included either sundried or oven-roasted tomatoes to produce its springlike vibrancy, and the basil, and perhaps tarragon, shone in the simple sauce. It was delicious.

Because the Husband helped me finish the pasta bowl, I had room for dessert. We chose one of the specials of the evening, a blood orange pot du crème with a lime meltaway cookies and fresh whipped cream. 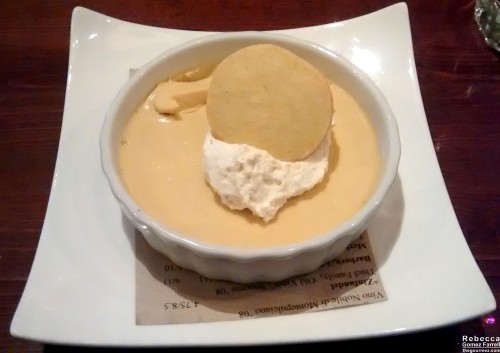 Every bite of that dessert was superb. The blood orange flavor was subtle enough that I nearly confused it with mango, which isn’t a bad thing. It combined wonderfully with the lime in the cookie that lived up to its buttery meltaway name. Honestly, I was most impressed with the whipped cream. You wouldn’t think whipping cream would be that hard for a restaurant to perfect, but it sadly is in many places. Pappo’s whipped cream was the real deal full of luscious texture from large air bubbles.

The only thing I can complain about is the lack of bread service before the entrees. But with how satisfied I was, that’s hardly worth mentioning. I can’t wait to go back, and I hope they still have the carrot-fennel soup on the menu when I do. It called to me strongly, but I knew I wouldn’t have the appetite for it and the pasta. Next time.