Posted in : Bars and Tasting Rooms, Breweries in Kinston - NC, Travel Guide for Kinston - NC on April 1, 2013 by : The Gourmez

In my first blog on this day trip to Kinston, I mentioned being pleasantly surprised to see Mother Earth Brewing loom up as we entered downtown.

My husband is a fan of their Weeping Willow Wit, a Belgian-style beer that is often his choice when picking a local draft from a restaurant, so stumbling upon their brewery was especially exciting for us. Stopping in to relax at their taproom for a while was perfect after a day spent traipsing around the riverfront.  The brewery is located at 311 N. Heritage St.

Stepping inside was like entering a new world after the somewhat abandoned, but cute, downtown of Kinston. 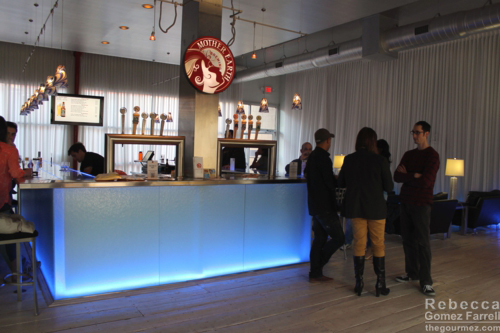 Suddenly, we knew where all the people were! I didn’t expect such a modern style of interior design for a brewery. I loved the blue and white color scheme and all the lush drapery on the walls. They also have a fairly swanky beer garden in the back. 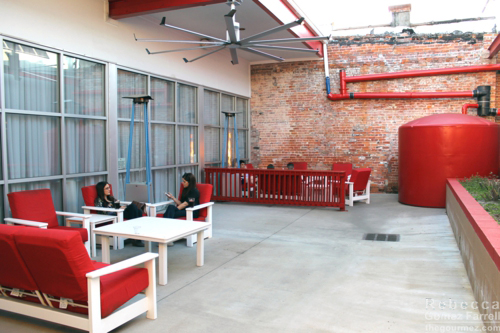 Red obviously dominates that area, and boy did those couches look comfy.

Mother Earth has a shifting screen near the back of the bar that lists all the brews presently available, a mix of their flagship beers and limited releases. They also have more detailed descriptions of the beers available at tables and at the bar. Ben, of course, decided on a flight to try as many as possible. 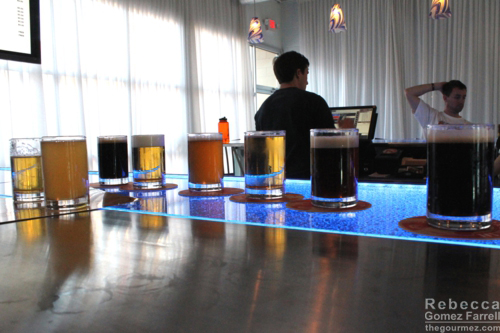 Doesn’t it look pretty with the blue lighting? And that is a lot of beer to try! Prices were darn affordable, too. With tip, four beers, and the flights, I think we made it out of there for about $25. From the flight, I enjoyed the Weeping Willow Wit, which is very floral with stone fruit notes among its grassiness. The Old Neighborhood Porter was also quite good with tantalizing cherry buried in the rich, dark ale. The winner for me, however, was the beer I picked out before trying any of the others. 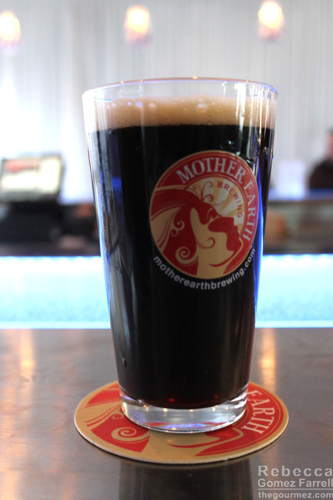 The Berlack Imperial Schwartz is lighter in body than a Guinness, making for easier drinking for this beer lightweight. It still has that bitterness and warmth I like in stouts along with earthy coffee notes, so I’d choose it over Guinness anytime.

My third blog on things to do in Kinston will focus on our dinner at the Chef & the Farmer. Spoiler alert! It lives up to the hype.