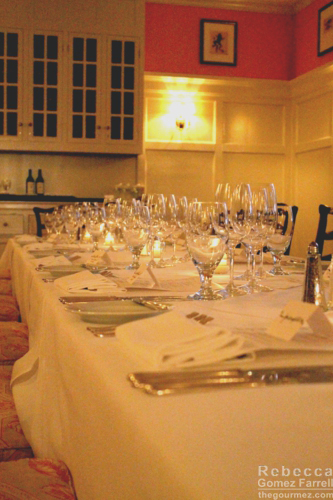 Two weeks ago, I was lucky enough to be invited to a complimentary media dinner at Carolina Crossroads in Chapel Hill. Carolina Crossroads is located inside the Carolina Inn, which has received 4 diamonds from AAA for the last 16 years. The restaurant has received 11 consecutive 4-star AAA ratings and 13 consecutive 4-star ratings from Forbes, which is quite an accomplishment. This night was a whirlwind tour of Chef James’s winter menu offerings. By whirlwind, I mean we had twelve dishes over seven courses, counting an amuse-bouche. Insanity! 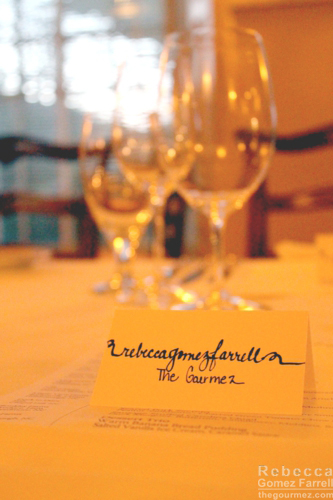 I learned a lot about the Carolina Inn from a few of our dining companions at this dinner: Martin Armes, their publicist, and Jack Schmidt, their general manager. Both men are charming and take obvious pride in being associated with the Carolina Inn. Jack is especially proud of being part of the University of North Carolina at Chapel Hill system and that proceeds from the inn and restaurant fund the North Carolina Collection at the UNC Library. Indeed, the Inn has a resident historian who is available to give tours about the Inn’s nearly 90-year history and the bar, with its newest remodel, shows off a large collection of illustrations from the Daily Tar Heel.

One cannot subsist on anecdotes alone, however, so Chef James started us out with a cold version of an appetizer normally served warm on the winter menu. 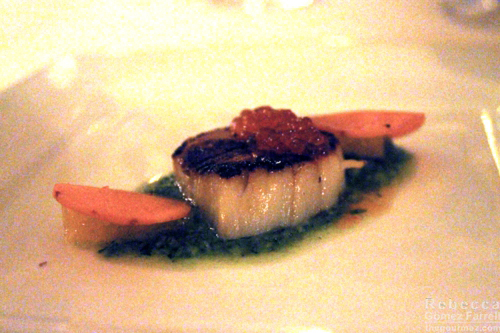 First, apologies for all these food pictures—my photography was not up to par this evening. Second, that’s a seared scallop served with arugula pesto, NC trout caviar, orange, and pickled radish. The caviar imparted a lot of salt that the char of the scallop soaked up beautifully. The pickled radish, orange, and pesto made a nice trio of complements.

We tried a few sandwiches offered on the lunch menu next. The smells of bread and caramelized onions were remarkable as the dishes were served. 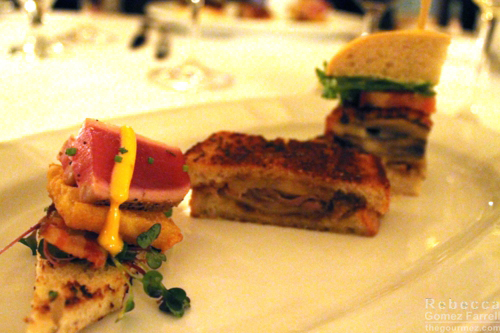 An ahi tuna BLFGT is in front of that shot, and it was an inventive sandwich. The thick tuna helping was cooked rare, and the fried green tomatoes, bacon, and spicy aioli made for pleasant textural sandwich companions. I’d like to try it with more heat from the aioli.

I had the pulled duck confit sandwich next, which included those caramelized onions we smelled, fig preserves, and swiss cheese. It’s on the left. 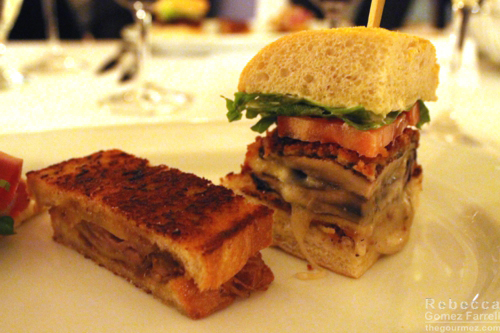 It was so, so good. The classic duck and berry pairing was cleverly reproduced within a grilled cheese sandwich. The duck itself could use a little more flavor, but Chef James wrung plenty out of the bread by coating it with mayonnaise prior to grilling. That’s a trick I will be reproducing soon! The sandwich on the right, a truffle mushroom sandwich with portobello, sottocenere (a white cheese with truffles laced into it), and onion aioli will thrill the vegetarians in the group. I’m not a mushroom fan, especially portobellos, but I was impressed with the heartiness of this offering.

The next course was a popular appetizer this season that Jack is hoping to convince the chef to keep on the menu all year. I don’t blame him. 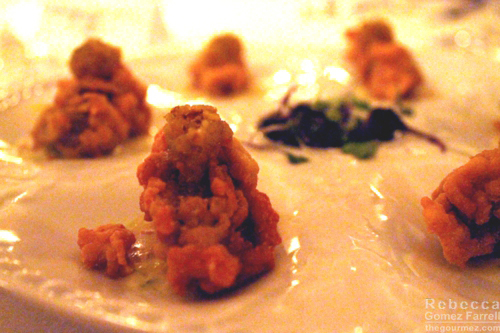 It was crispy fried oysters with a country ham leek reduction below and a sunchoke and Pernod relish up top. The platter smelled amazing, giving off that tantalizing fried aroma rather than the deep-fried stench that can sometimes take over such food. The batter was thick and crunchy, and I loved the crazy contrast that came from pairing Pernod’s anise flavor with it. I wouldn’t expect those elements to work together, but I think the leek reduction worked some magic to make it happen. That appetizer is well worth trying at the bar on a casual evening.

A pair of fresh fish entrees came next, both procured by Dock to Door, the NC seafood service founded by Amanda Miller, an always fun dining companion who was there that evening. The two of us may need to market ourselves as conversationalists for hire at these events in the future (Want to start a new business, Amanda? ☺). The offerings were white grunt with leek and yellow beet confit, celery root horseradish puree, and watercress puree on the right and triggerfish with crisped pork belly, brussel sprouts, sunchokes, and corn milk butter on the left. 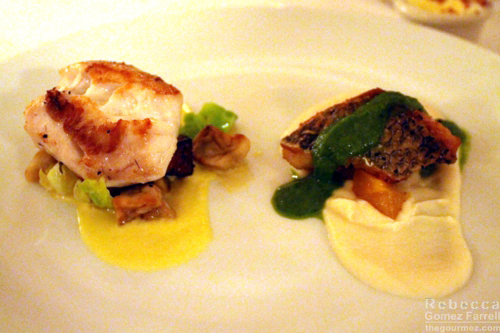 First off, the corn milk butter was genius. It provided a delicate sweetness that enlivened every bite it graced. Both fishes were cooked to fluffy, pleasing textures, and the vegetables were crisp and retained enough crunch to satisfy me. I appreciated that the horseradish was very mild, but I did think the pork belly and the watercress puree were lost. I wouldn’t be surprised if having the full portion of the entrees would solve that.

Course #4, and Dish #8 if you’re counting, was chestnut and acorn squash ravioli with ricotta made in-house, winter greens, and local mushrooms. 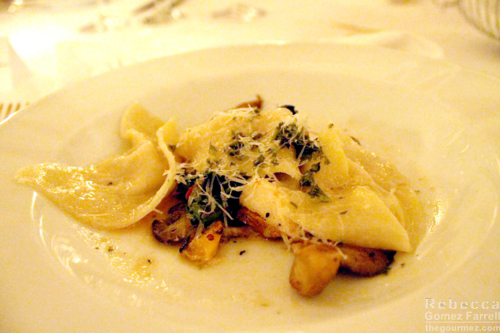 The artfully sloppy presentation of this dish was a good touch because it called attention to the handmade, delicious raviolis, making me wish I had an Italian mother making them in my kitchen. The cheese smelled rich and tangy and was the star of the dish along with the greens.

The meats took center stage next. 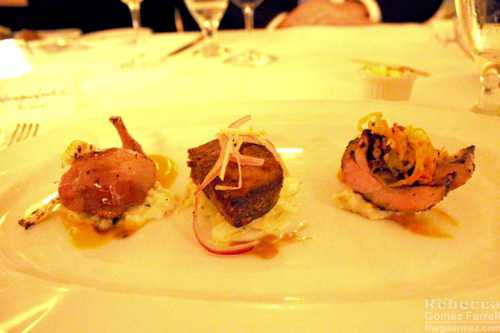 From left to right, we had duck-merguez-sausage-stuffed quail, butternut squash, cauliflower, and rice middlins served with a brown butter sauce; lamb shoulder terrine with creamed cabbage, Granny Smith apple salad, and an onion vinaigrette; and pork secreto with charred green-tomato chow chow, sweet potato mustard, and a peanut “goldsotto,” meaning a risotto made with peanuts. The quail and duck sausage combination was entirely unexpected but very successful. Secreto is a rarely used cut of pork that is similar to a beef strip steak, and I must say, it should be used more often. The combination of the peanut risotto and the chow chow gave that dish an Asian-Southern fusion sensibility, and it was worth trying for the pork cut on its own. My favorite, though, was the lamb shoulder terrine, which had a pulled-meat texture though the whole slice of terrine was fried crisp. The awesome creamed cabbage and apple slaw gave plenty of tartness and richness to what could come across as a drier dish otherwise.

Finally, the dessert. Three of course, because how could we feed our gluttony with only one? 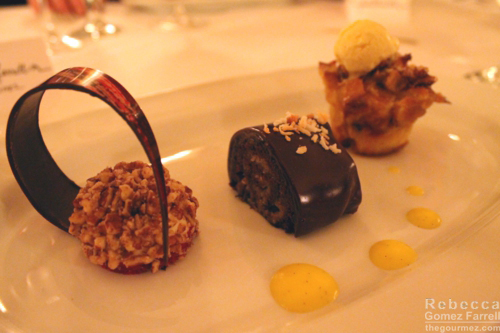 I’ll start with the warm banana bread pudding on the far end, served with salted vanilla ice cream and caramel sauce. The banana livened up the bread pudding, and there was an alluring toffee crunch to its outer shell. In the middle was a play on a German chocolate cake with vanilla and toasted coconut cream and sour cherry sauces tucked inside a roulade. The heavy frosting lent a generous helping of chocolate. I preferred this style over a normal slice of German chocolate cake, especially enjoying the several tiny layers of coconut filling. But nearly everyone agreed that the red velvet and cream cheese mousse dome covered in salted pecans in the forefront was the winner. Our fellow dinners were exclaiming their love for it while I was still drooling over banana bread pudding. Its texture was light and smooth, and it had a slightly raspberry taste to my palate. Jack’s wife, Linda, pointed out that it wasn’t that sweet of a dessert and the restraint may actually be what made it so excellent. Kudos to Pastry Chef Sara Thomas.

What’s nice about these media dinners, beyond the opportunity to sample cuisine that would qualify as a rare splurge on a blogger’s budget, is the opportunity to talk with the chef and the restaurant proprietors. Chef James gave us an introduction to each of our courses– 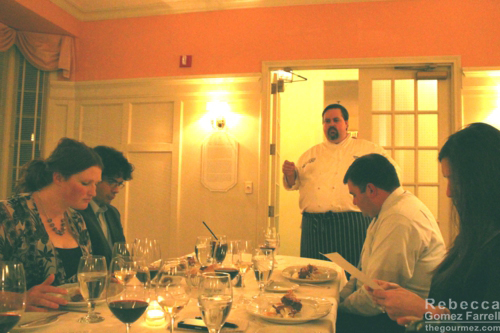 The chef doing so at the end of our long table

–and sat down for a well-deserved break at the end the meal, fielding our questions. (Yes, readers, he is working on a rabbit entree, if your question happens to be the same as mine was.) It’s always a treat to be invited, and I want to extend my thanks to the Carolina Crossroads team for a delicious feast that conquered us all with the sheer magnitude of food and the imagination shown in the creative pairings. Try that winter menu while you can, especially the oysters, red velvet mousse, lamb terrine, and pulled duck and tuna sandwiches.