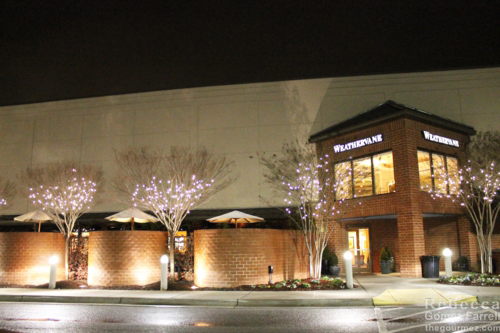 Weathervane is the restaurant portion of Southern Season, and hearty southern dishes have a definite home here. Chef Ryan Payne has had a fantastic year, winning pretty much every local cooking contest he has entered. I had previously tried his food at Fire in the Triangle and at the NC Chef’s Academy throwdown, but never at Weathervane itself. The restaurant is done in creams and browns, and there’s a swooping feel to the inviting bar on the right as you enter and the main dining room that manages to feel intimate. That may just have been because we had the back booth. 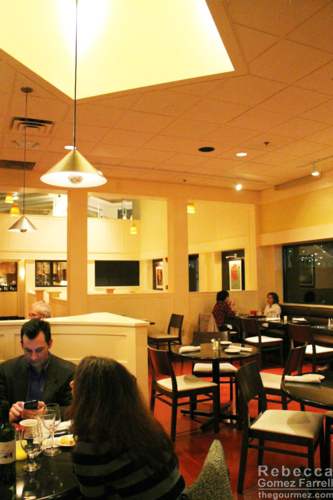 From the onset, I felt a kinship with the waiter, because he described every detail of the dishes we’d receive so nothing would be unexpected—in other words, this man has obviously had customers complain about not having salads included or finding portions too small before. I felt for him. He was very attentive for most of the meal, but by the time the entrees arrived, he disappeared and a lengthy wait for the desserts and checks ensued. Mr. Waiter, you led me on with our earlier kinship, but you entertained me regardless.

Weathervane doesn’t dabble in mixology, but they do have an extensive list of spirits, beers, and wines. On a Wednesday, bottles of wines offered by the glass were also half off, so we split one of those. My dining companions loved that we had personal ramekins of butter, and I loved that it was so soft and warm. Restaurateurs, I highly recommend you stop serving cold, hard butter at all. Also, herb butter rocks, which Weathervane did not offer.

I think we were all famished this evening, and we dove right in by sharing an order of bacon-cheddar tater tots with slab bacon and veal gravy. 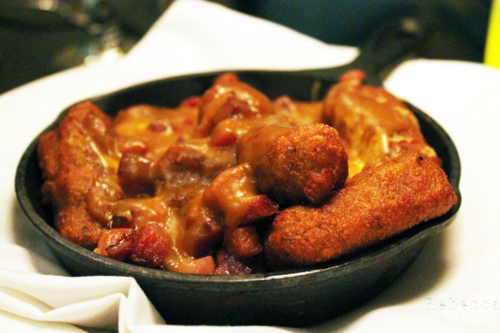 It was definitely our first sign that there would be nothing light served this evening. Subverting expectations of crunchy tots, the potato resembled croquettes in shape and outside crust and gnocchi in the inner creamy and chewy texture. My first thought was of poutine on seeing the skillet served. The gravy was so rich that the salt from the hamlike bacon was necessary to cut through it. The cheddar cheese was not sharp enough to stand up to the other ingredients and was lost in the mix. But it was good.

After that appetizer, we all had first courses; I told you we were hungry. Mine were three fried green tomatoes with herb cream cheese sandwiched between them. Tomato jam and green-onion aioli rounded out the dish. 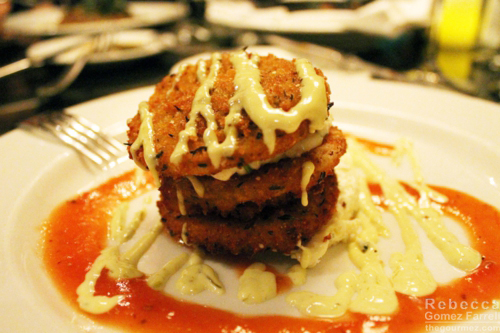 Delicious. I should have ended my meal with that because it was so good I had to eat it all. I especially reveled in the green-onion brightness of the aioli. The cream cheese tasted like it was made with perhaps green garlic rather than mature garlic. Whether that was true or not, I loved the flavor of it. The tomato jam imparted a delicate fruit essence that enhanced the cream cheese and aioli, and the batter was perfect for soaking it all up.

Mr. Waiter made sure Friend #1 knew her butternut squash raviolo would be only one raviolo, but he neglected to mention that it was huge! 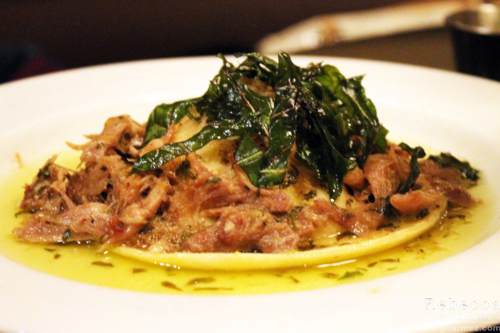 Topped with duck confit, citrus butter, and crispy collard greens, it was assuredly a meal in itself. She enjoyed it but thought the confit was oilier than necessary. For her entrée, she also chose an appetizer, the Korean barbeque short rib served over hoop cheese macaroni with pickled onions. 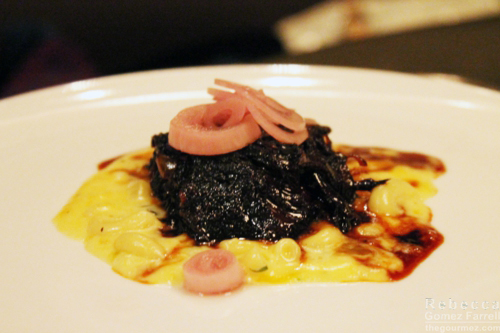 By this point, I think the sheer earthiness of her food was overwhelming, but the meat was especially great.

Friend #2 had the lamb sausage bolognese with cavatelli pasta. Also in the dish were oil-cured tomatoes, feta cheese, plentiful olives, and a helping of grilled country bread. This friend thought the flavors of the bolognese were great, but it was much heavier on the olive side than the sausage side, making it come off as more of a typical Mediterranean olive oil sauce than a bolognese.

My own dish was the blackened diver scallops with roasted cauliflower and brussels sprouts with a piquillo pepper sauce. 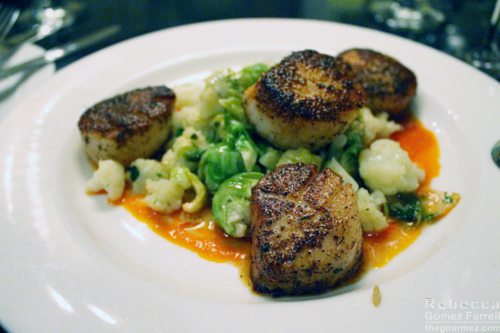 The blackened seasonings created a delicious shell for the perfectly seared scallops, and the vegetables were cooked just right. However, the dish was super buttery, which after those first two courses made it hard to take! There was little piquillo pepper flavor, so I think this dish would actually benefit from decreasing the butter and increasing the presence of the pepper. But it was quite good.

Friend #3 chose the grilled hanger steak and braised short rib for her entrée. 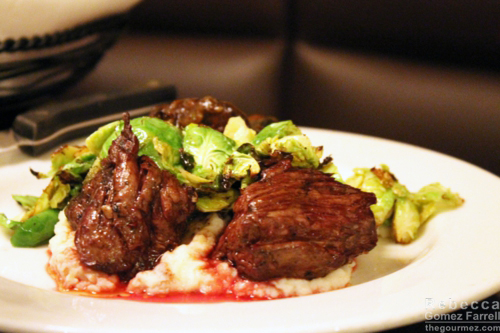 It was served over goat cheese potatoes with brussels sprouts and citrus butter. The potatoes had a good tang, and she gave special praise to the citrus butter. One portion of the hanger steak was undercooked, but as we all took half our entrees home, we decided that was providence for when she would reheat it later.

I passed on dessert—I was so very full at this point. But my fearless companions carried on. Friend #2 had the cinnamon-raisin-bread pudding with butter rum sauce and whipped cream. 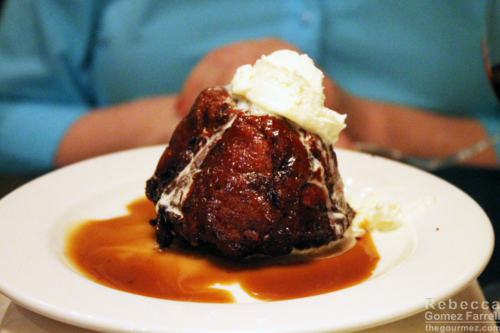 The coloring on the pudding was gorgeous, but she found it dry overall, preferring casserole-style bread pudding where there is less surface space to bake, preserving more moisture.

Friend #1 opted for vanilla crème brûlée with a gingersnap cookie. 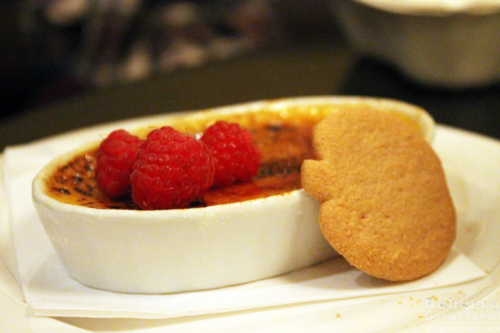 No complaints here.  It was tasty, by-the-book crème brûlée. Friend #3 had the most adventurous choice: pumpkin-apple fritters with powdered sugar and caramel-popcorn ice cream. 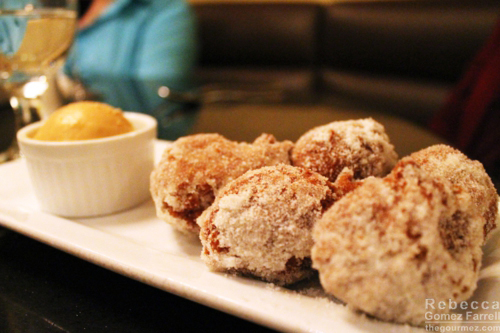 I had a bite of that one, and the fritters’ texture was fantastic, somehow tasting creamy though cooked all the way. Combined with the ice cream that retained a lot of that near-burnt taste from the caramelization of sugar, the whole dessert burst with flavor.

As you can tell, Weathervane serves satiating, earthy fare. Any one dish had enough food and flavor to be filling on its own, so it actually may not be the best choice if you want to make it out without gaining several pounds. But the food was great even when it wasn’t quite what we expected. I would definitely recommend the current menu for a cold winter’s evening, and I would imagine the menu lightens up some when the season changes.