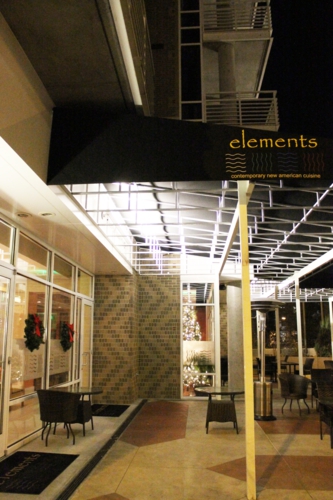 Opened in the fall of 2012, elements is a farm-to-table focused venture of Chef Michael Chuong’s. He opened ăn in Cary in 2006. I have never made it to ăn, but it’s always been high on my must-dine list, so I was thrilled when I learned he was opening a restaurant just a 10-minute drive from my house. I had been to Achira Thai and Sushi, the spot’s former inhabitant, a couple of times. While that was a restaurant with delicious food, it had major problems with wait times for that food. This restaurant does not share that drawback, but it does share the same centerpiece of a table that Achira had. 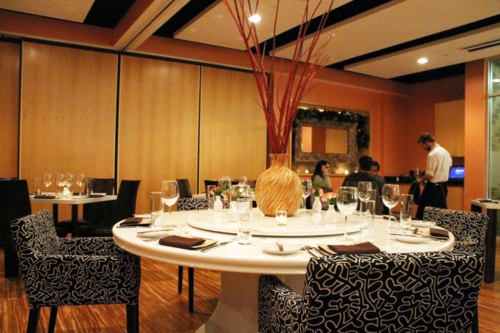 Otherwise, the restaurant has been redesigned from the cool blues and greens of Achira into much warmer tones of medium wood, pink walls that appear peach in the dim lighting, and orange and red accent pieces. As for service, our waitress was quite pleasant and talkative, but she tended to disappear for significant stretches of time between courses.

As I’m sure will surprise you, I started out with a cocktail from element’s impressive list. The jalapeno cucumber sour is made with Tanqueray 10, jalapeno simple syrup, lemon and grapefruit juices, cucumber water, and a cucumber slice. 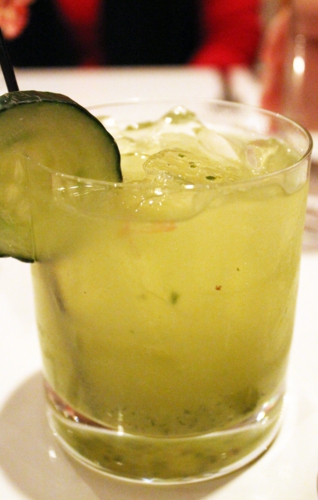 I’m pretty sure some cucumbers were muddled up in the drink as well. I am not a big gin fan, but it paired nicely with the cucumber in this elixir, and the spice from the jalapeno amplified the herbal qualities of them both. Using cucumber water in addition to fresh cucumber made a big difference in letting its flavor come through clearly.

A friend had the down home old-fashioned with Southern Comfort, cherry liqueur, ginger ale, and muddled cherry. 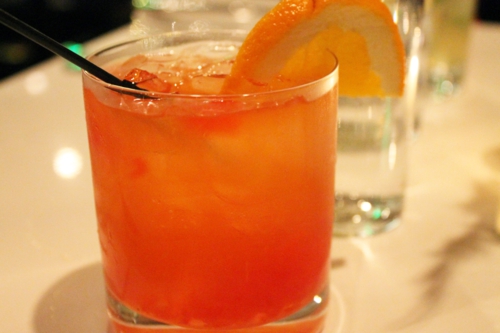 He seemed pleased with it. His wife had a ginger mojito, which tasted lively and had fun garnishes. 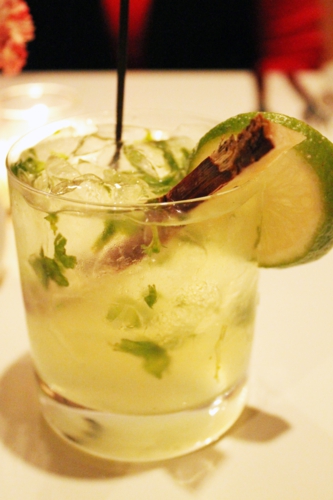 Bread before the meal was hearty fare with a nutty crust that I loved. It needs the butter, though, as it’s a bit on the dry side.  One of our friends started the meal with an appetizer of Nassawadox oysters with a Vietnamese-inspired mignonette sauce. 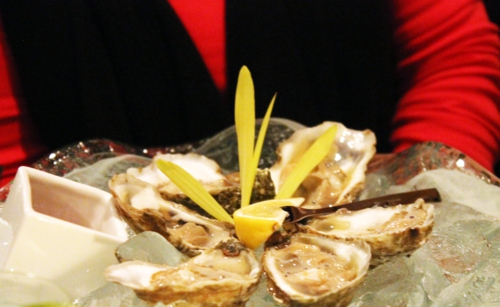 I think I can say she was in heaven while finishing that starter, so much so I wished yet again that I understood the appeal of oysters on the half-shell. But that thought did not linger because dinner appeared. 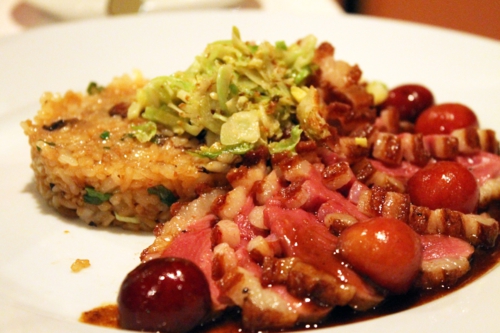 That was my husband’s duck in cherry sauce with a risotto cake and brussel sprouts. He thought it was fantastic, and if you know my husband, you don’t get that much excitement about most meals. It was a daily special, and unfortunately, we did not think to ask the price, so when the bill came, we suffered a bit of sticker shock at the $45 for that plate alone. Because most of the entrees are less than $30, I think it’s fair to say we didn’t expect one dish to cost that much! But it was a dish to remember, so…

One of our friends had the filet mignon with Jersey white sweet potato fries, cremini mushrooms, asparagus, and a red wine demi-glace. That dish is normally the most expensive on the menu, and she loved the filet despite it being a tad overcooked. It was still tender and quite delicious. The potatoes could have used more seasoning as they were quite starchy, but otherwise, it was nicely executed.

I wanted to love my chicken diablo. I really did. 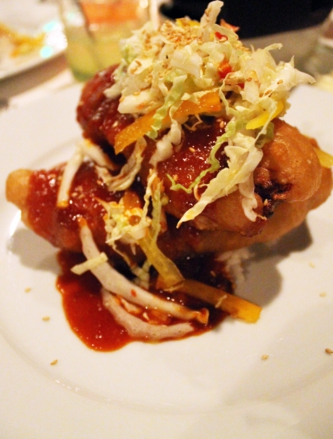 It consists of two breaded chicken breasts topped with Korean chili sauce, peppers, and baby bok choy all served over jasmine rice. The sauce was delicious, sweet and sour with mild fire. The bok choy and peppers were essentially coleslaw with great flavor between them. The chicken breading, however, was problematic. The chicken itself was fine, but it was only about 1/3-inch thick and hiding in a pillowcase of chewy and slightly greasy tempura breading. That breading was out of control. While it soaked in the sauce nicely, it dominated the dish. I enjoyed the addicting sauce, but I mourned for how much better the dish could be with a simpler breading.

To assuage my woes, dessert was a must. I opted for the spiced blue hokkaido pumpkin crème brûlée with candied pecans, toasted marshmallow, and cranberry compote. 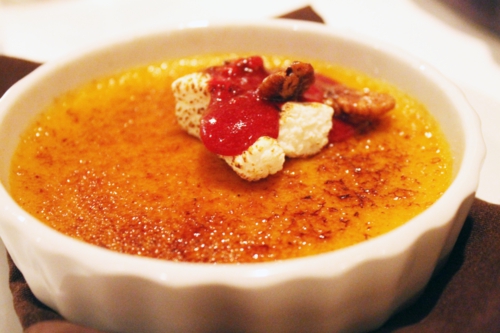 Wonderful. The spices were turned up a notch from what you’d get in pumpkin pie. The crème brûlée was smooth and full of mellow, homey pumpkin. I would have liked more of the marshmallow to counteract the tartness of the compote, but that’s a small complaint. It’s worth noting that I didn’t get my coffee I ordered with dessert until after I was done with the crème brûlée.

I would categorize elements as a restaurant for special nights out, but I’m not sure my dish was enough to convince me to return there rather than one of the other multitudes of options in the Triangle. If I were to base this solely on everyone else’s dishes, the drinks, and dessert, I would recommend it without qualms. But the service did need a little work in attentiveness, so I will place it in the middle of the road for comparable restaurants. I wouldn’t say no to going back, but I’m not rushing to get a seat at the table.