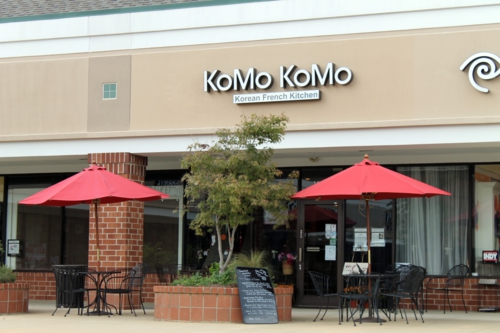 Komo Komo calls itself a Korean French kitchen, and it’s having a lot of fun with the idea of fusion cooking, at least in terms of afternoon tea. They offer it for only one hour a week, from 2:30 pm to 3:30 pm on Wednesdays. My group of 3 was one of four reservations for the service, so it wasn’t packed, but the restaurant did not feel empty, either. 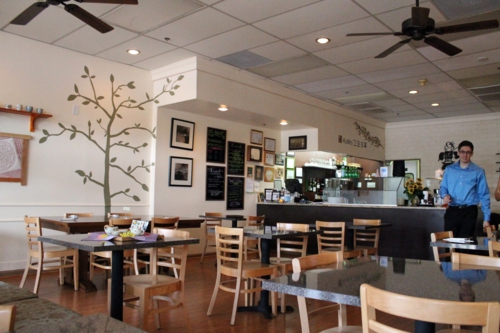 The atmosphere is perhaps a touch too casual for the menu, but it’s still charming, with simple splashes on the walls that resemble shadow box images of trees and branches. There is also a solitary chime of paper-glass butterflies. Light wood booths and tables are offset by the darker wood counter that takes up the back portion of the space. At first, I was worried the tea service would be too casual for my preferences as well, as the tea selection was mainly of Trader Joe’s options from across the street. But honestly, I cannot complain about my ginger-pear white tea choice. 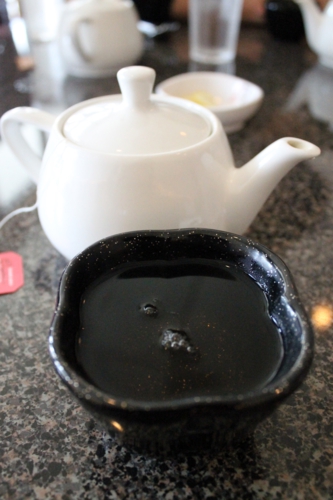 Fun ceramics always make a meal more exciting, and the tea was a fantastic flavor. I’m picking that up next time I’m at TJ’s! Also worth noting is that KoMo KoMo’s bussing trays are some of the most elegant ones I’ve seen at any restaurant.

The tea service began with a plate of three pastries each. 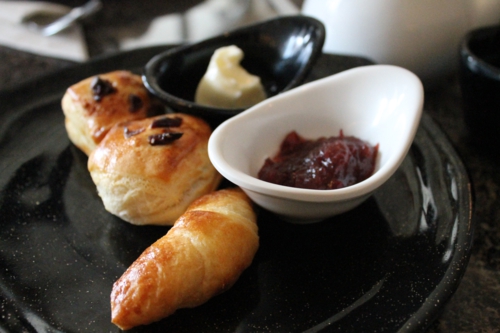 My beginning perception of a good, but lackluster tea service was more than defeated with the next presentation. 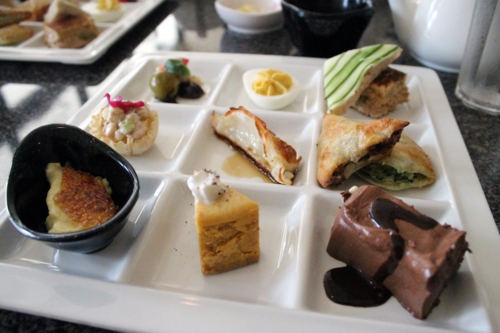 Gorgeous, no? Nearly every bite was inventive and memorable. Let’s attack them one by one. The olives with peppers, basil, balsamic vinegar, and provolone were fresh and flavorful. The chicken salad in a phyllo shell was tasty, but nothing particularly stood out about it. 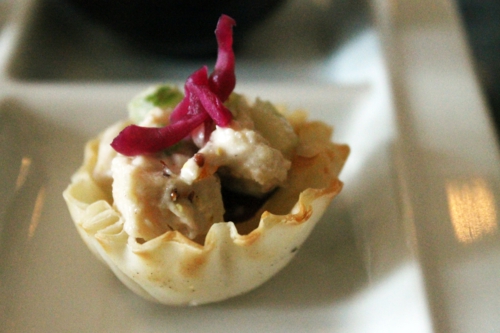 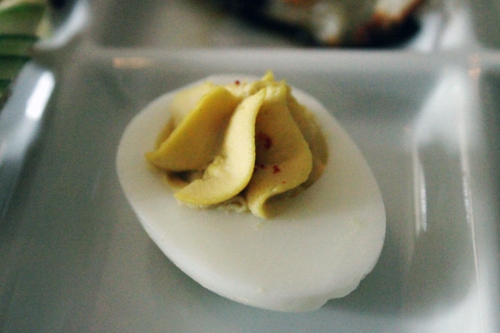 That deviled egg was too vinegary and mustardy for my tastes, but my companions did not have similar hang-ups.

The store owner described the cucumber sandwich as one of their signature tea items, and I hesitated to believe it’d be noteworthy, because I usually find cucumber sandwiches incredibly boring—at this point in the review, I hope you realize that I’m not actually that big of a fan of tea services! But this cucumber sandwich bite was anything but ordinary. 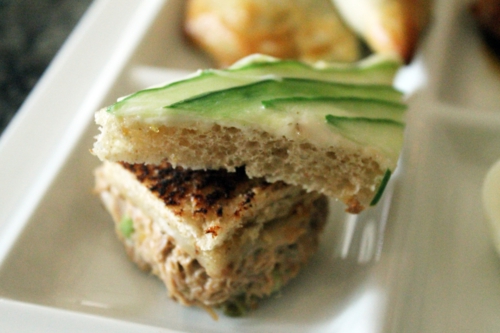 I think it was so successful because of how the cucumber slices were layered. It was pleasing to the eye and created an exciting texture on the tongue. The bite of tuna melt beneath it was okay, but it would have been improved if served warm—that wouldn’t be very tealike, however.

Next up was the mushroom, spinach, and sweet potato dumplings. 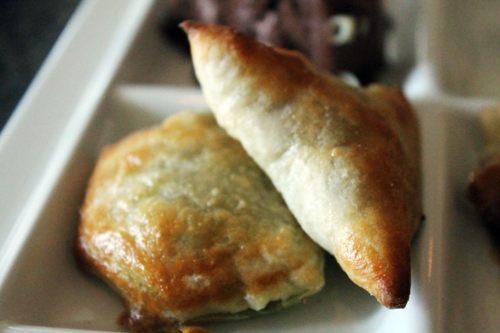 I had to be convinced there was no meat in the mushroom treat. The mushrooms’ savoriness was so bold, I really thought it was some sort of game meat. It was delicious, and I don’t say that lightly of anything with mushrooms. The texture of both dumplings was like fluffy mashed potatoes. The shells had an interesting doughy texture as well.

The most memorable part of the chicken dumpling, closer to a gyoza, was how browned it was to a golden-red that provided a nice crunch. Delicious. 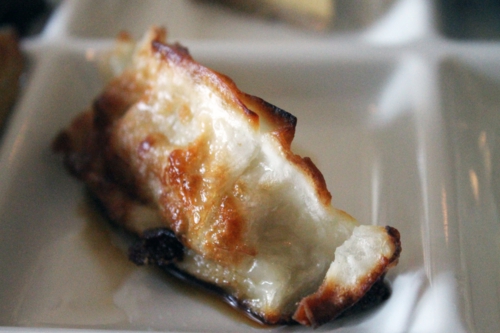 Finally, I made it to the dessert bites! My absolute favorite was the chocolate cake, which I neglected to take a picture of. Look back up at the full-platter shot instead! Normally, I scoff at desserts as basic as chocolate cake or plain vanilla cheesecakes because I’ve had them so much, I need something out of left field to liven them up. Well, KoMo KoMo proved they can liven up these desserts just fine, my skepticism be darned! The cake was airy and moist, and the frosting was extraordinary. I’d liken it to the taste of fluffy brownie batter. 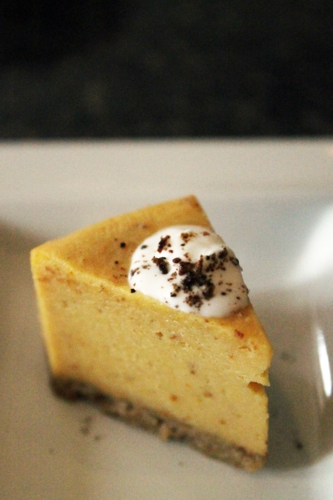 I didn’t expect the pumpkin cheesecake to excite me either, but the spices really shone. The nutmeg was especially prominent and invigorated the rich, creamy cake. The final dessert was also introduced to us as a signature item: lemongrass and ginger crème brulée. 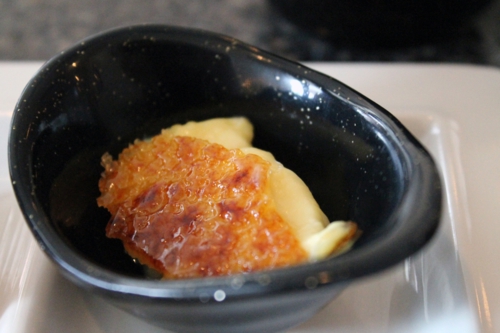 The lemongrass provided a subtle contrast to the buttery crème brulée textures. I didn’t particular taste the ginger, but I didn’t need to with the dessert’s already delicately balanced layers.

The adventure didn’t end with our food, however, because KoMo KoMo also has a unique way to present their checks! 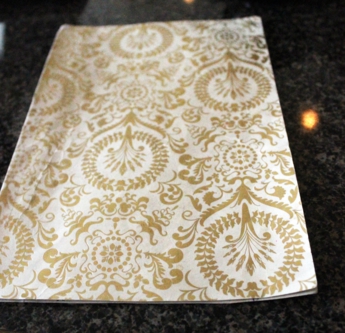 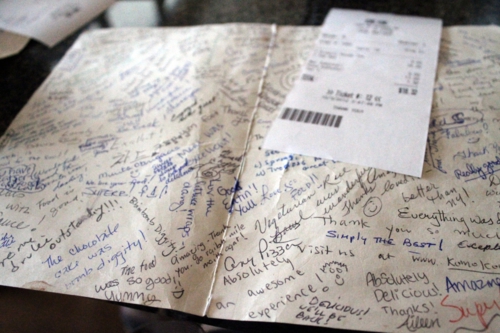 They are covered inside with well wishes and thanks from previous patrons. So fun to read them over, much like reading the graffiteed walls of a bathroom stall at a bar but quite a bit classier.

For $20 including the tea service and tea, an afternoon spent at KoMo KoMo is definitely worth it. If they offered loose leaf teas from a local purveyor instead, the tea service would be excellent. Regardless, it’s worth trying, and it has definitely whetted my appetite to try out their regular menu soon. Who wants to come?