Mint is an upscale Indian restaurant that resides in a former bank. Thus mint serves as a double entendre for the location and the popular herb in Indian cooking. Most of the space is full of light from the storefront glass, complimenting the gold and black tones of the simple modern décor. The back table was pretty dark, however. If you want to see your food well, you should ask not to be seated there. 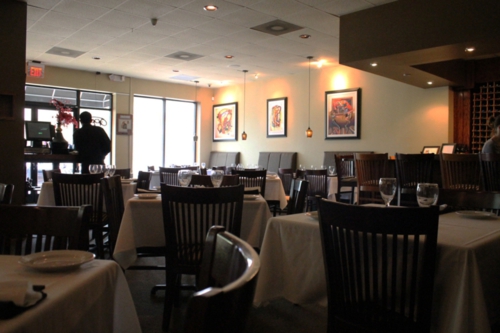 I was at Mint with a group of seven, and we were a bit much for them to handle, although there were few other diners. Food came out at different times, and some of the orders were wrong. They were not grievous errors but little things like getting an order of assorted breads when garlic naan was requested or being served the wrong glass of wine. No errors were a big enough deal that we felt the need to complain.

Regardless of those hiccups, the food was great. I was surprised that we weren’t served the standard chutneys and pappadum to start but we did end up with a lot of extra bread. The naan was delicious, lightly oiled, and fresh. The shrimp fritters were also quite good. They had a unique, thick coating with a bit of red to it and curry spices mixed into the batter that I found too chewy but rather interesting. For my dinner, I chose the vegetarian thali, which includes naan, raita, paneer saag, a samosa, dal maknni, rice, and a black pepper cauliflower dish with a tomato sauce. 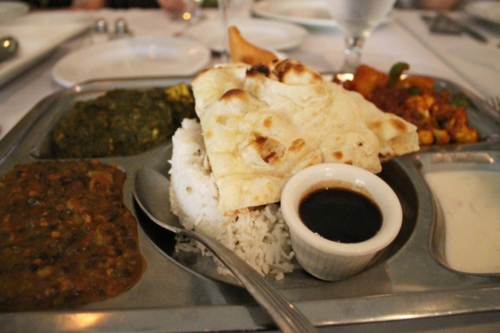 Now, that’s a lot of food for just $3 more than most of their entrees! It also included dessert that I’ll discuss later. The paneer saag was my spiciest dish, and I’d say it was as hot as I requested, which is always a plus. It was the best dish on that plate. The rice was cooked expertly, though the raita was disappointingly flavorless. The dhal was also cooked expertly, which for me means it didn’t taste pasty. I often don’t like dhal due to that texture. The vegetables in the black pepper dish were delicious and tender-crisp but the sauce was lackluster. I ended up with a chicken samosa instead of the vegetarian one the meal comes with because my friend had ordered a vegetarian one and was given chicken by mistake, so we switched. The filling was just dry chicken and peas with a masala curry flavor—I’ve had more exciting samosas. She thought the vegetarian one was great. It looked chockfull of potatoes.

My husband had the goat vindaloo, and he was happy. I did not try it. 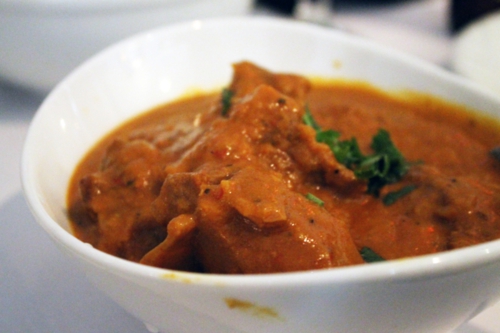 For dessert, I was served the pistachio kulfi that comes with the thali option. 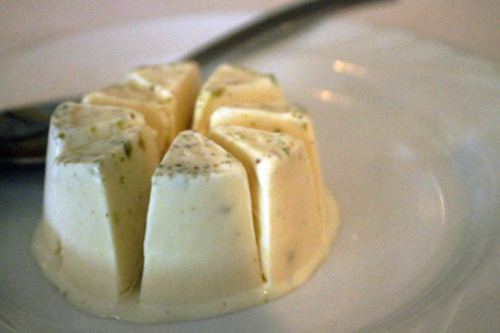 It’s ice cream that is heavy on the milk fat, extra icy on the edges, and very good. Pistachios and a dash of cardamom were sprinkled on top.

Mint serves up quality Indian food, but I’m not quite sure it matches up with the upscale ambience and pricing they reach for. It was a nice meal, but most the dishes were close to what I could get at a more casual location for half the price. If I want an inventive, top-notch, Indian meal out, I will stick with Saffron.