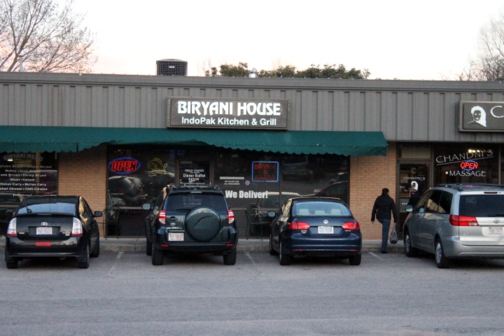 I’m always looking for Indian food that blows me away in the Triangle, and Biryani House made a pretty good attempt at that. Only Saffron has done better, and because it’s on the pricier side, my quest for more affordable, awesome Indian food has continued. I think Biryani House is the best affordable Indian I’ve had in the area yet.

It’s situated in a Cary strip mall that is full of Indian stores and eateries — I’d never been there before, and I cannot wait to try the spot billing itself an Indian fast food restaurant across the parking lot or the Mithai House of Indian Desserts a few stores down. Asian foods, in my experience, don’t have a huge range of desserts, so I would love to be educated otherwise by trying Mithai, but back to Biryani House . . . it’s furnished with dark, tall booths, and a row of tables down the middle of the space. The multicolored spotlights give it a hint of whimsy. 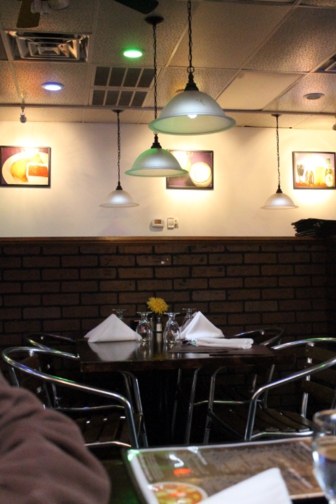 The front of the restaurant is taken over with their buffet, which is offered for lunch and dinner. I am not a buffet fan, if only because I know I have no willpower and am quickly overwhelmed by wanting to try one of everything. So the husband, a friend, and I ordered off their regular menu. In addition to regular sodas, they offer two bottled imports from India, Thums Up (similar to Dr. Pepper) and Limca (somewhere between Sprite or Fresca).

Remember how I have to try everything? That’s right, I ordered a Limca. It was fine as sodas go, but honestly, I’m not a big soda person, so I probably should have passed. If you like citrus sodas, you’ll like it. They also have sweet, salty, and mango lassi and Indian hot tea.

We started out with an order of the paneer pakora. 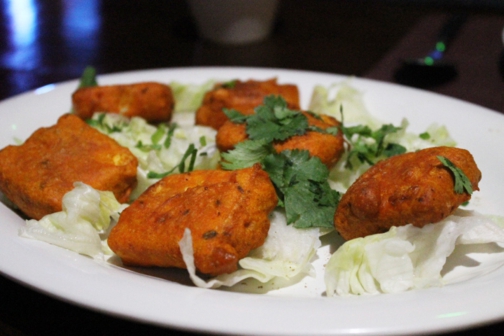 They are cheese squares dipped in batter and fried. I thought they were rather delicious, though I don’t think they were spicy as advertised. The batter was quite unique and red-tinted — we mused over whether paprika and tomato might have been involved in the seasonings. Pretty tasty!

Entrees were next, and my husband chose the goat biryani. 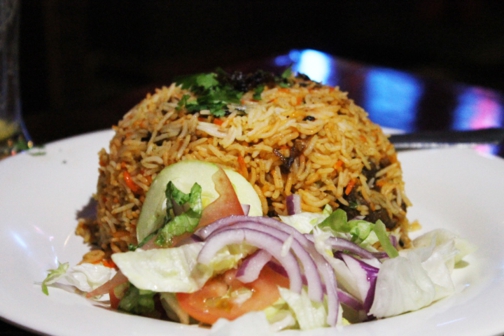 Biryani, of course, is the house specialty. It’s a rice dish similar to fried rice but much less greasy. Usually, it has a delicate presence of cardamom, nutmeg, and other Indian spices as well as nuts and dried fruits. I enjoyed my few bites, thinking the spices quite nice. The goat was good, too, though there may have been more bone than goat! Regardless, my husband enjoyed the dish, but I thought my meal was the better choice. He disagreed, of course.

Our friend had the lamb korma with ground nuts, cream, and spices. 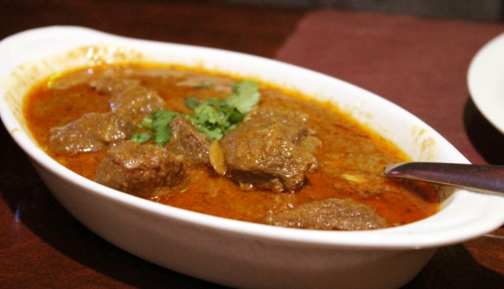 She was very happy with it — I don’t remember any complaints, but I’m sure she’ll correct me if I’m wrong! I wanted the chili chicken cooked with green pepper and onion in a hot and sweet sauce. 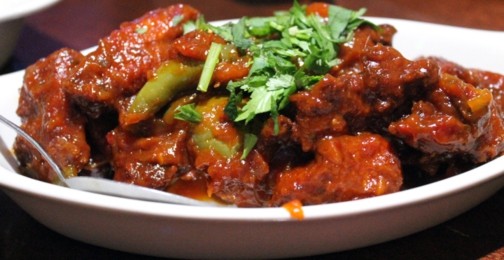 It was excellent. The sauce made a thick coating over the tender chicken, and its flavor was delicious. It seemed rather spicy at first, but my palate grew used to it fast, concentrating on the sweetness that followed the heat and kept me wanting more. The cilantro was essential, interacting as a bright flavor that mellowed the intensity of the others some.

We also ordered the spicy naan, topped with chopped Indian green peppers—I’m not sure if they were the same peppers as in my dish, but I think those were standard American-style bell peppers and these were not. 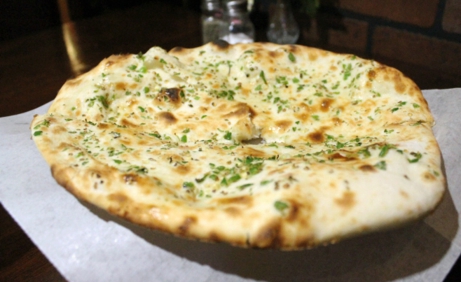 The bread was warm and fluffy, but I was disappointed at the lack of heat from the peppers. If you try Biryani House, perhaps you should give one of their nine other options a try — the Kheema Naan with spices and ground chicken sounds especially interesting.

As I told you at the start, I thought Biryani was great, and I’d go again happily! However, I think a certain dessert house may be calling my name first . . .