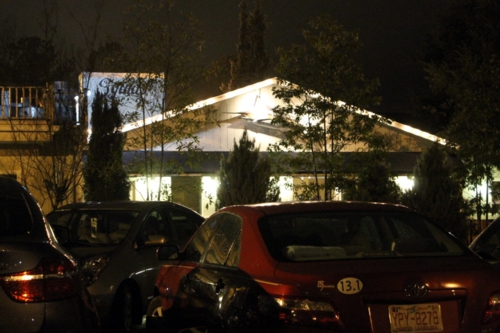 Squid’s is a seafood restaurant in Chapel Hill that I’ve passed a million times on the road, always wondering at the packed parking lot but never actually hearing much about the place. I think the lack of buzz is because Squid’s is an old standby—it’s been around for nearly 20 years. It also serves cuisine worthy of that longevity.

Inside, the restaurant embraces its nautical theme but in an understated way—the fish sculptures on the wall don’t boast cartoon eyes but are made of brushed metal instead. Never fear, there is at least one aquarium in the main dining room.

The menu runs the gamut of seafood offerings, from lower priced fried standards to more finely crafted entrees like horseradish-crusted tilapia with roasted potatoes and mushrooms in an onion-cream sauce. 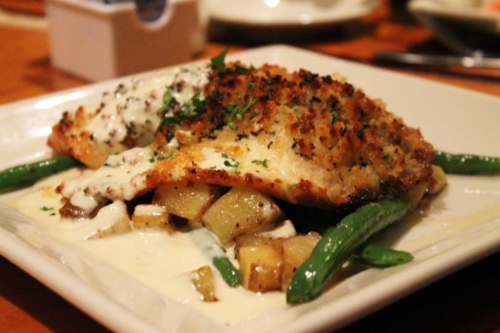 Mashed potatoes and sautéed vegetables were the standard pairing for most wood-grilled fish and lobster and steak options. Oysters, crab legs, clams—there are plenty of options in whatever preparation you’d like, whether steamed, baked, or raw.

Fluffy, tubular hush puppies are served with every meal. 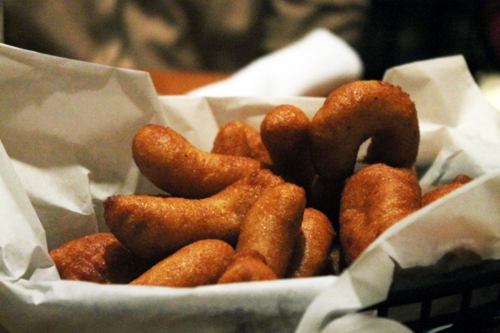 They were fried perfectly, though I prefer mine to have some kick to them.

I was with a large group for a birthday party, and I’m pretty sure everyone enjoyed their entrees, though we didn’t discuss them much—birthday party and all. Here are a few of the dishes we ordered: 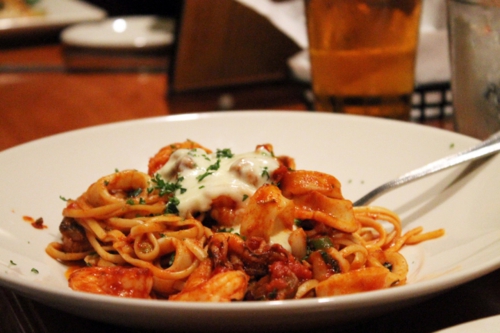 Fra Diavolo, a dish made with a spicy parmesan cream sauce over linguini with shrimp and calamari. 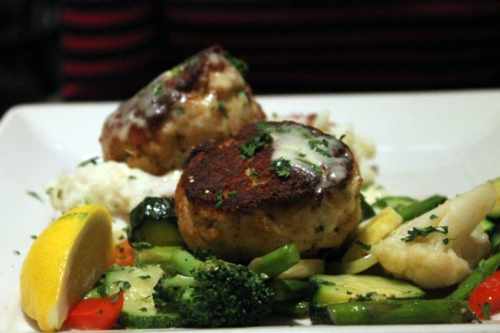 I thought my choice of the grilled shrimp was fantastic. 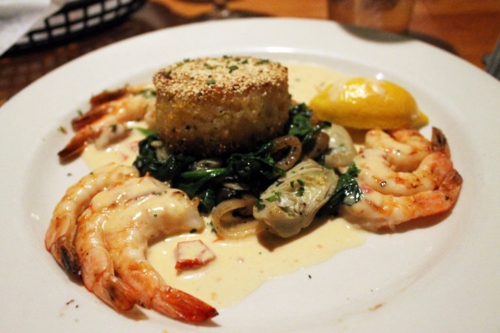 It was a plentiful portion of shrimp served with absolutely wonderful lemon risotto cakes. The lemon was lively, and the crust of the cakes was crunchy and delicious. They used something thick to form it, similar to finely ground cornflakes, and it provided a great texture. The artichoke hearts, grilled onions, and spinach that were served in a sundried tomato sauce went well with the rest of the dish, providing bright flavors that shrimp thrives in.

We didn’t try Squid’s desserts, having brought in our own cakes for the party, but I think I can state confidently that Squid’s is worthy of its status as a trusted Chapel Hill establishment. In fact, I would love to see it get more buzz—I was surprised by how thoughtfully my dish was prepared and hadn’t expected anything more than simple fish standbys. Of course, those can be quite impressive as well, and I think I’ll have to try something wood grilled in the future.