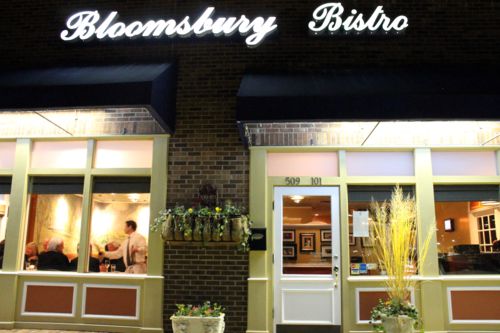 Bloomsbury Bistro is located in a shopping center right near the Five Points intersection in Raleigh. The restaurant is cozy with French provincial coloring and a mural on the back wall of what looks like a relaxed afternoon in the country. The rest of the walls are dijon and salmon colored. It was empty early in the evening but completely filled up by about 7:30. The clientele skewed toward 40 and older. 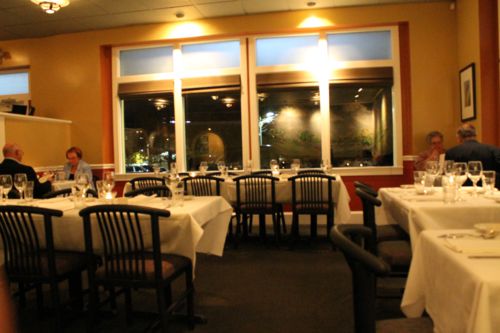 Chef John Toler’s entrees are French in style, but they meander into Southern, Asian, and other cuisines that liven up the recipes and produce multitudes of quotation marks on the menu descriptions, because nothing is done quite in a traditional manner. The only truly disappointing part of the evening was the uninspired cocktail list, with a lemon drop being about the most interesting drink on the list. For an upscale, inventive restaurant like Bloomsbury Bistro, I expect more in the mixology department. Plus, I really needed a drink that night. Of course, I had some wine to make up for that disappointment.

The first of many nice touches at Bloomsbury Bistro was the herb butter served with the bread. It was very light on herbs; there were just enough to accent the butter’s flavor, making for a lovely spread.

Now, this was a gourmet club outing, so the four of us, as usual, ended up with a huge variety of dishes. The prettiest appetizer was the sautéed black tiger shrimp with stoneground grits cake, served with a collard greens and black-eyed pea salad, peppercorn bacon, and Johnston County country ham vinaigrette. 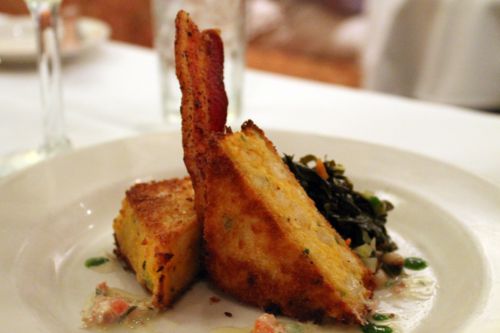 Friend #1 thought it was far too salty, but she enjoyed the rest of the flavors before the salt tainted her taste buds. My charred roma tomato bisque with pulled roast duck, basil crème fraîche, garlic bread croutons, and a splash of Guinness did not have an overseasoning problem. 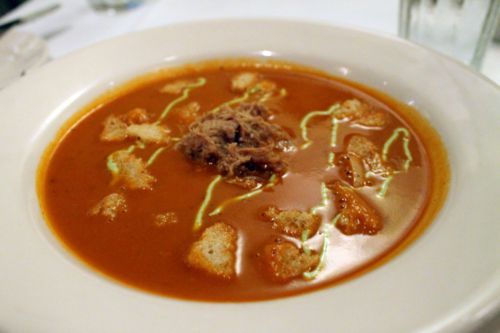 Tomato soup often strikes me as boring, but that was definitely not the case with this dish. The best part was the roasted flavor of the tomatoes. The croutons and duck provided wonderful complementary flavors and textures to the tomato soup. I can’t say I tasted the Guinness at all, but I didn’t need to. 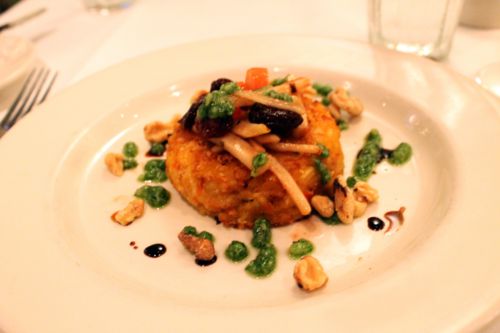 That was also my choice for a main course—Bloomsbury Bistro’s entrees are heavy on the meat, and I wasn’t in the mood for a slab of steak or chop that evening. This moist dish hit the spot for me, combining a lot of flavors that don’t normally dance with each other on a plate. The pistachios were especially lovely, and the sour cherry did wonders for livening up the more mellow flavors of the pumpkin-gruyere risotto “torta.” I think the pear was overpowered by all the other delicious flavors, and I did want just a bit more of the rich balsamic vinegar, but I was quite pleased.

My companions, never ones to turn away meat, embraced the entrees. The pan-roasted chicken “cordon blue” was the most impressive to look at. 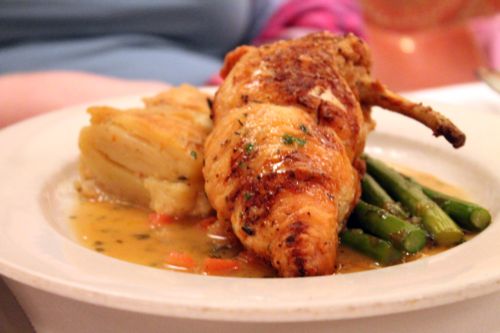 The chicken breast was stuffed with black forest ham and swiss cheese then served with a potato-parmesan gratin, asparagus, and herbed jus lie. Friend #3 thought it was pretty good, but she felt it may have been oversalted. I spent most the meal thinking the gratin was some sort of puff pastry—it looked pretty darn awesome in its arrangement. 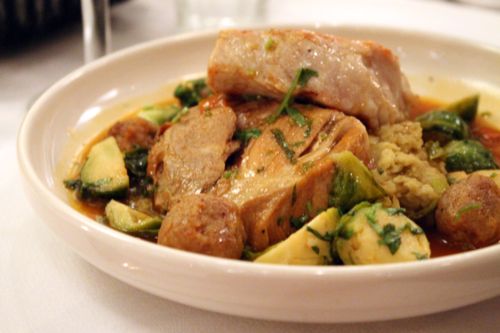 Again, the only complaint was that it was a bit oversalted. The final entrée was pecan-crusted NC winter flounder grenobloisse over roasted butternut squash with toasted peppercorn spaetzle, haricots verts, and lemon-caper brown butter. 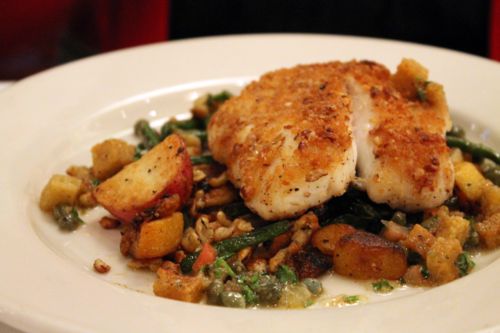 If I had been in a meat mood, that dish would have been my choice, and I’m still a little sad I didn’t try the spaetzle.

We ordered four desserts for four ladies, and all of them were well received. My mascarpone “crème brûlée” with a spiced graham cracker crust and burnt brandy sauce was an imaginative presentation for a crème brûlée. 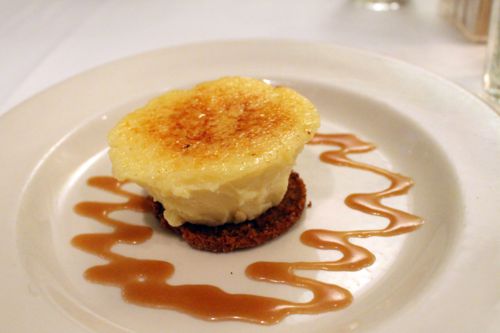 The texture of the marscapone in the crème brulee was grainy, making it fun to roll around my tongue. I liked the combination with the crust as well, though the brandy sauce could have been more lively. 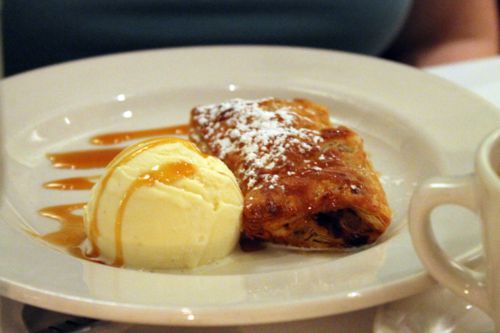 Friend #3 made many curious sounds as she discovered apple in one bite, then cheese in the next. I haven’t tried that particular flavor combination yet, either, so I’m sure I’d have been just as delighted by the experience. 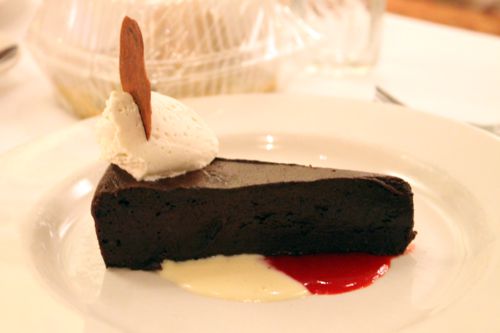 It’s a dense chocolate cake, and you need every bit of whipped cream to cut through it. Honestly, I was drooling just looking at that whipped cream dollop. 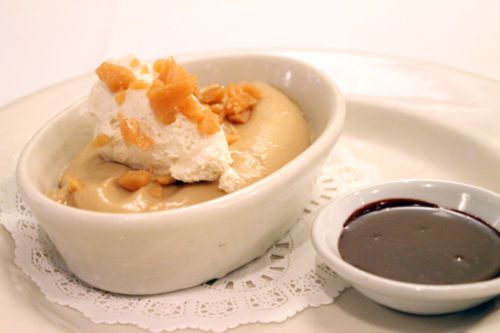 Sometimes, a simple pudding is all you need, especially when you have a delicious chocolate sauce to complement it and some crunch from toffee. The butterscotch flavor wasn’t overly sweet, either—it didn’t make my teeth ache, just smile, as I tasted it.

Based on the packed house and intriguing pairings of ingredients you don’t often find together, I think Bloomsbury Bistro is definitely worth your dollar. You may find a little too much salt on some dishes, but don’t let that sway you from trying out what Chef John Toler has to offer.

One thought on : Bloomsbury Bistro