On my second day downtown, and fourth day in LA, my sister joined me for sightseeing and dining. We took advantage of DineLA! week to try out a spot called Tiara Café, roughly ten blocks from my hotel. 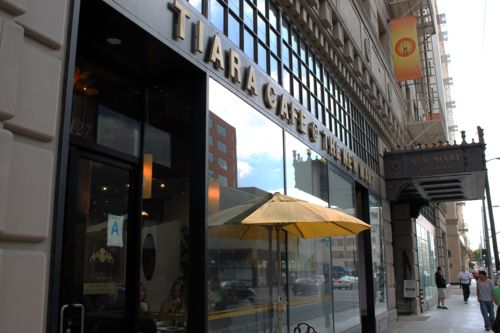 It’s going for a hipster aesthetic with a focus on market-fresh, healthy ingredients and the colors of sunset in the Jurassic Age. 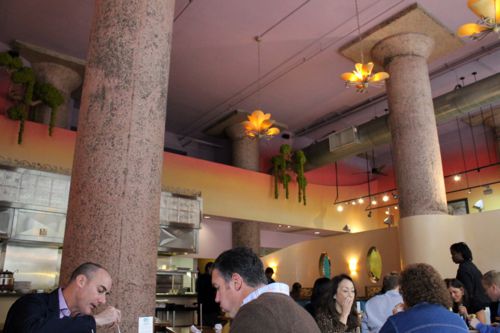 Tiara Café offers freshwiches (attractively arranged sans the bread), presswiches (pressed sandwiches), and pizzettes (I have no clue why those aren’t just called pizzas). For DineLA!, you get three courses for one affordable price ($15), and my sister and I shared our options. First up was a complimentary starter, the fried hummus sticks. 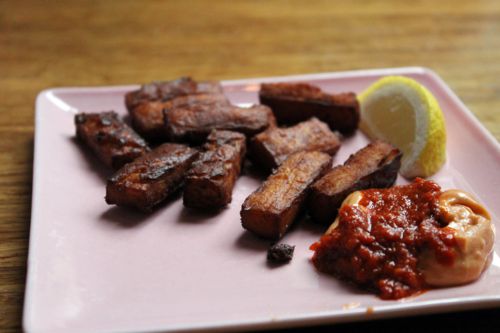 These were the best part of the meal for me, though my sister didn’t care for them. I have no idea how they managed to batter hummus to fry it, but the texture was amazing, as was the chile sauce served with them. If anyone in NC wants to try your hand at it, believe me, I will come eat your fried hummus sticks. That scrumptious plate was followed by the Great Balls of Fire, slow-smoked pulled pork encased in a mac and cheese shell. 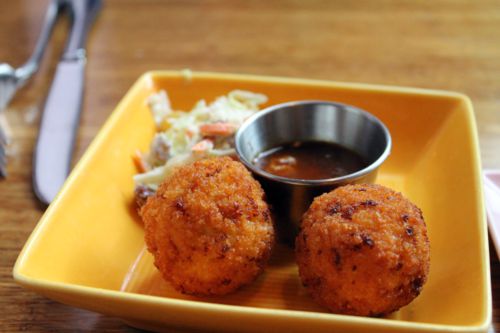 These wanted to be awesome, but I was so busy being confused at the lack of advertised jalapeno pickle or any spice whatsoever, that I couldn’t tell you if they really were. Mac and cheese just does not shine in forms like this, where it ends up really dry for the novelty of serving as a shell rather than a side dish. The pork hidden inside was pretty good.

Our other appetizer was a California chopped salad. It was a mix of grilled vegetables on greens with avocado and a citrus-coriander dressing. 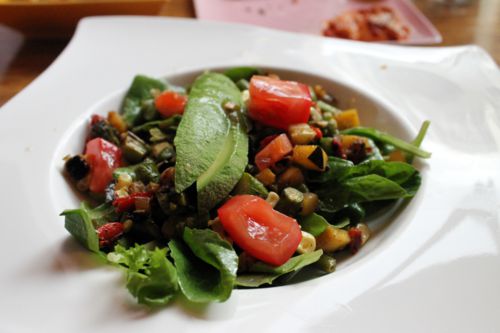 That was a great salad, especially the grilled zucchini and the light, vibrant dressing.

It was pizza heaven for my sister, who is indeed quite the carnivore. I tried a slice, and it was fine, but I couldn’t find half the meats it listed on there. It was huge, though, so beware if you’re hoping to get off with a light meal! The pizzette is nowhere near as small as it sounds.

I chose the grilled achiote-marinated halibut enchiladas for my main course instead.

It came with beans in addition to the rice, but I asked for them to be left off. That orange sauce was a yellow tomato and habanero sauce. Folks, my sister can’t eat bell peppers; they are too spicy for her. She tried the sauce and had no problem with it at all. I’m still flabbergasted how something with habaneros could have been so flavorless, but it was. That said, the halibut and poblano inside the enchiladas were delicious, simply prepared and seasoned to shine. But I had my heart so set on the heat that was missing from both this and those balls of fire, Tiara Café was disappointing me.

Dessert changed that for the better. 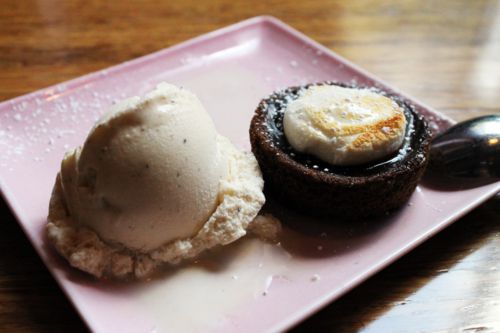 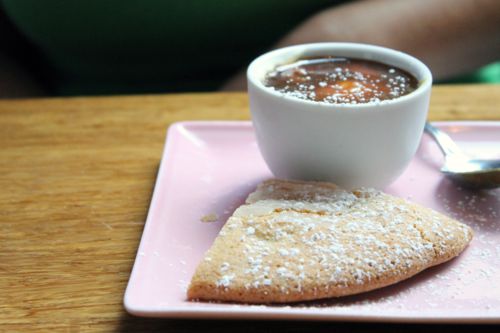 The top dessert was a work of genius, the S’Mookie. It contained a graham cracker crust topped with caramel, chocolate, and a toasted marshmallow and served up with a nice ice cream. I am a sucker for all s’mores knockoffs, and this is definitely one of the better ones out there. The second image is of a lemon sabayon, an Italian custard dessert with an airy meringue cookie. My sister couldn’t eat it, thinking the hardened caramel on top was too burnt. She was right, but that didn’t stop me from demolishing that sweet treat, too. There was something addictive about the burnt flavor—I couldn’t stop myself from eating it!

After lunch, we headed up Broadway and took a right on 2nd St., making our way to Little Tokyo. We rested from our walking at the Kyoto Grand Hotel’s lobby—apparently, I don’t only wear Ben out on vacation sightseeing. Then it was up to the top floor to explore their rooftop garden. 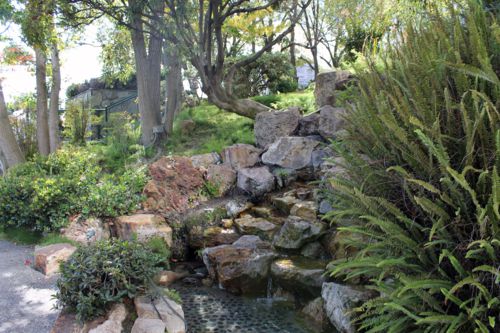 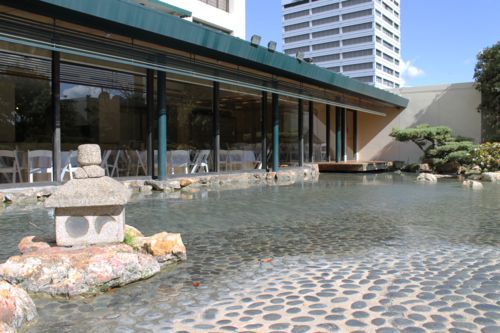 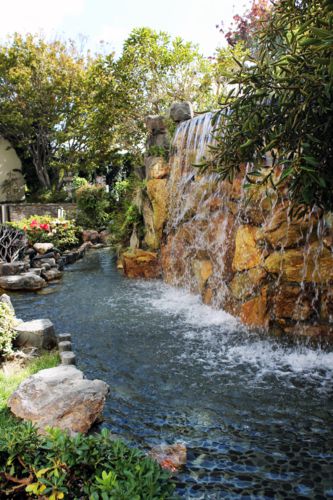 The garden also affords a great view of the downtown LA skyline. 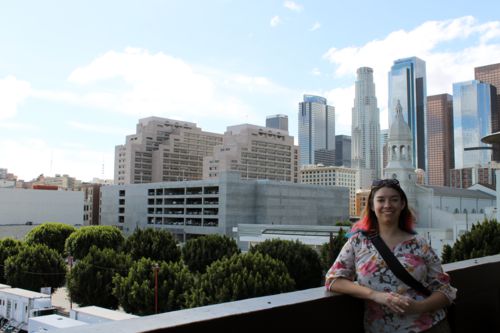 We then took a walkway from the hotel rooftop to Weller Court, a nearby plaza with a number of Japanese restaurants, a large Japanese market, and a Japanese bookstore. 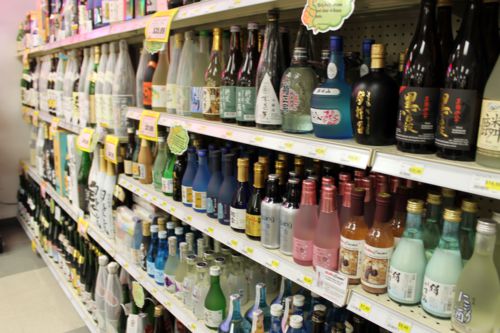 I am unashamedly jealous of that sake selection in the market. Sake is in seriously small supply in North Carolina, and it’s a beverage I need to explore more.

Little Tokyo takes up a good six blocks, if not more, of the northeastern side of downtown LA. It’s mostly shopping and restaurants, but there is nice architecture tying the area together and a number of Buddhist temples to look at, at least from the outside. Here are the highlights for me:

A Challenger memorial, in honor of the Japanese American astronaut who perished. 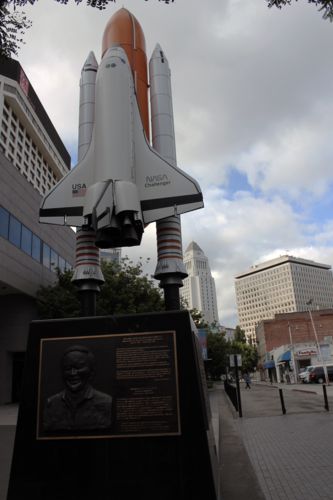 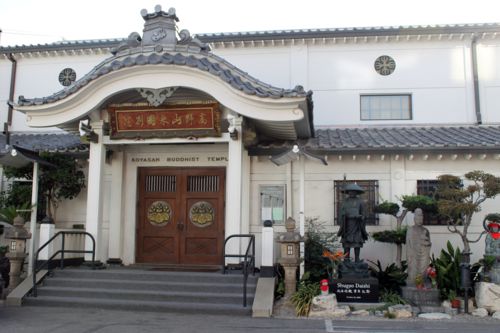 My sister taking advantage of my photo-taking habit to have another rest. 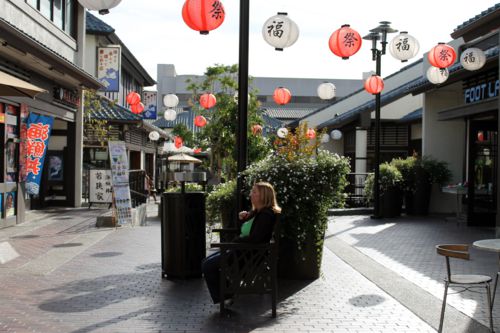 Japan Village Plaza from the other side. 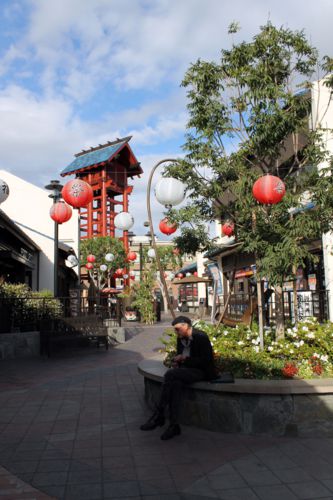 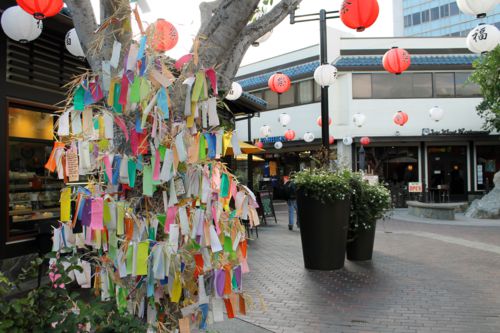 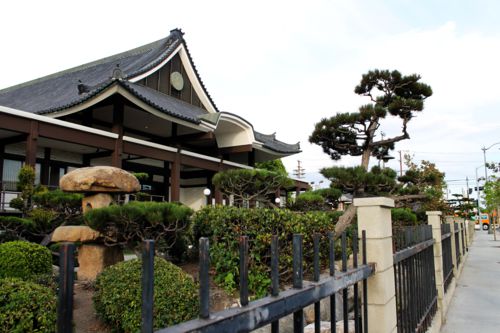 That last picture is of Nishi Hongwanji Temple. It’s more off the beaten path, at 1st St. and Vignes St. The Japanese American Museum is located in Little Tokyo, but it appeared closed when we were there. We did, however, spend a half-hour at the Chado Tea Room, a tea seller located on the museum grounds. They have an impressive tea selection, and the staff was very pleasant, happy to share their new favorite tea with us. After I drank a whole pot, giving my sister more time to rest, of course, we continued onward.

I love stumbling across graffiti murals while traveling, and these pieces in small car lots on 1st St. were exquisite as far as my nondiscerning eye goes. 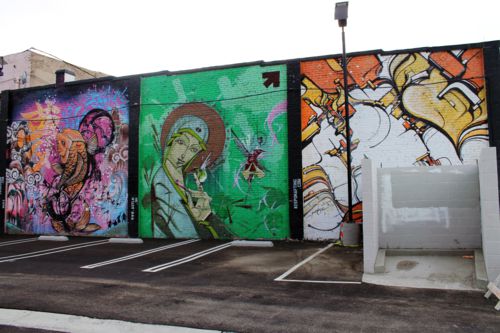 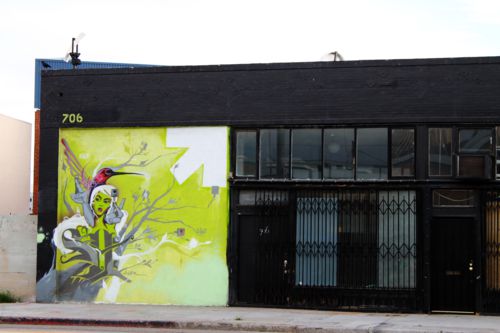 My final Little Tokyo shot before heading inside the Little Tokyo Marketplace for dinner was actually of the Centenary United Methodist Church at 3rd St. and Central Ave. I thought it looked splendid in that sky with its sharp angles. 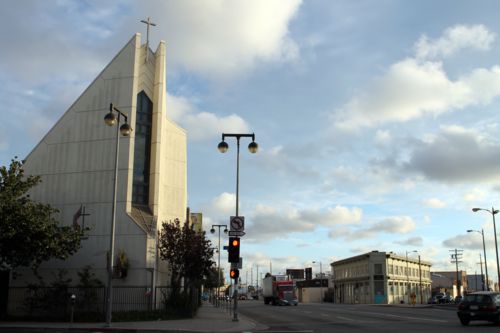 Dinner was with Christa, one of her best friends, Angela, and our cousin Kelly at Honda Ya, a Japanese restaurant tucked into a mall that Christa’s had great experiences at before. 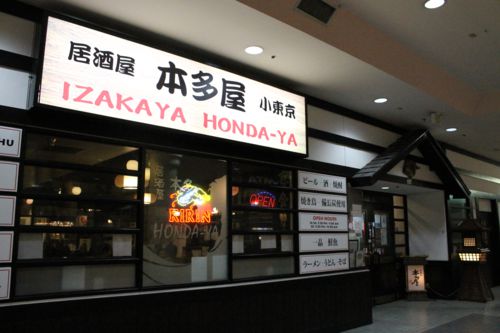 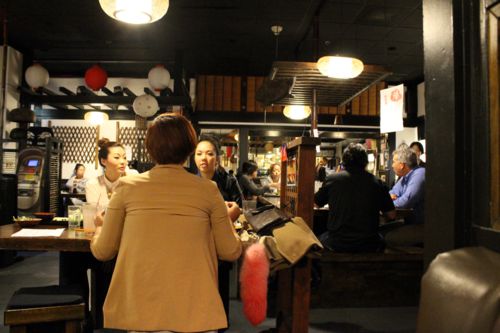 They had a more varied drink selection than we thought at first—plenty of Japanese beer and wine, but they also offered shochu, a starch-based spirit, and its cocktail complement, the chu-hi, which is shochu mixed with soda water and any of a variety of flavors like yuzu, peach, lychee, or whatever syrups are on hand.  Both the plain shochu and the white peach chu-hi I had were great. The meal was great as well, though I may have been a bit too adventurous this time.

Some of their sushi options.

The standard miso soup and side salad with ginger dressing. 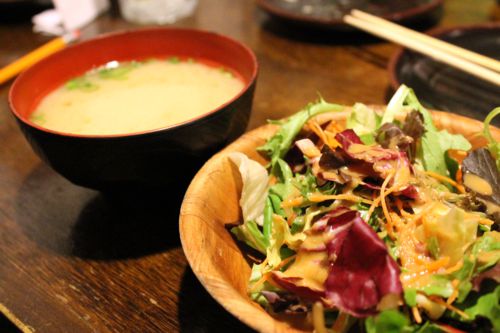 I tried two new dishes to me. One was red snapper wrapped in banana leaves and then fried in a tempura batter. 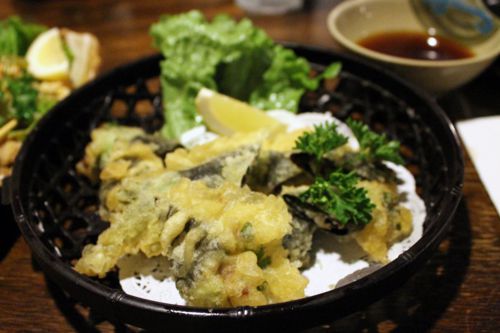 That was rather good, with a sweet and sour flavor from the banana leaves that kept my taste buds interested. My second dish, bitter melon stir-fry with egg and bacon, did not sit as well with me. 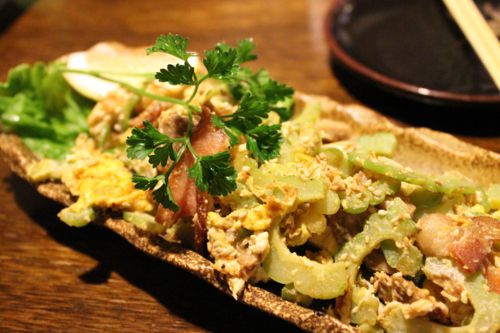 I tried, I really did, but bitter melon is really bitter (imagine that, I know). It was overwhelming at first bite, but I convinced myself that it didn’t taste that bad after several more, only to find that yes, it really did a few bites later. The bacon and egg almost made it palatable for me, but ultimately, I was conquered by the bitter melon. I had to try it, right? I’ve always wanted to, and now I know that it’s an ingredient I can do without.

We bid adieu to Kelly and Angela, 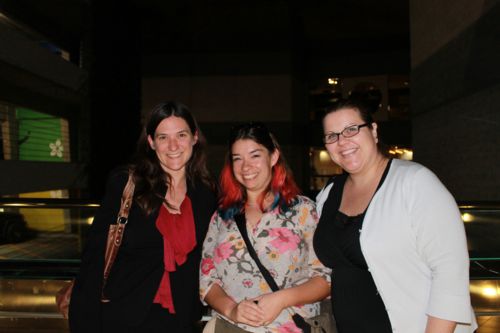 then Christa dropped me off at the Rivera, a restaurant and bar that her friend Derek, met that first night downtown, had recommended a drink at. While I listened to the outdoor Weezer concert Adobe was throwing their attendees, including Ben, I found the right place. The Rivera is a swanky spot, and the cocktail recommended by Derek definitely fit the swanky bill—the Barbacoa. 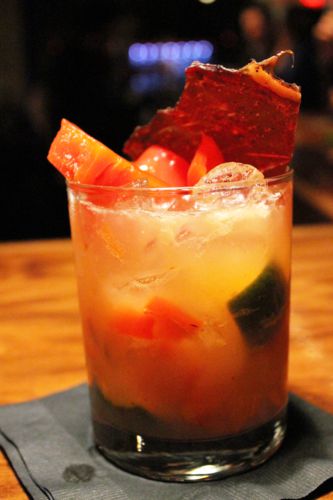 That beautiful drink was made with mezcal (tequila is also an option), lemon juice, agave nectar, ginger syrup, chipotle in adobe, lime, red bell pepper, and beef jerky, those last two items being garnishes that give much more flavor than garnishes typically do. It’s a spicy drink with all the right proportions for a tasty, tingly treat. Let me tell you, the bartenders at the Rivera know their stuff. Watching them move is a treat of its own, and the talkative locals I encountered were also a plus. If you don’t mind paying for a great drink and the décor to go with it, then definitely try out Rivera.

Once Ben joined me and had finished his own Barbacoa, our hotel room was calling. Day 4 in LA was at an end. Never fear, there were more food and sightseeing adventures on the morrow, including Chinatown in the pouring rain and an extra special dinner at Bouchon in Beverly Hills, complete with celebrity sightings.