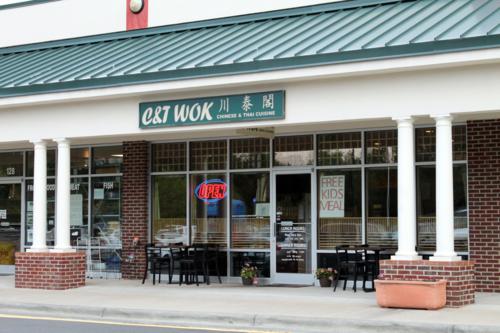 C & T Wok is a fantastic spot tucked away in one of Morrisville’s strip malls. It’s a plain, yet cozy, restaurant with wood paneling and a friendly staff. In addition to American Chinese, Szechuan Chinese, and Thai menus, there are nightly specials on the board (I was so tempted by the seafood hot pot) and regular weekly specials including soy milk and tofu made in-house. The menus are rather extensive, and the Szechuan spice levels are just where they should be, delicious and not overpowering. For those more adventurous than I, the Szechuan menu also has plenty of dishes not seen in your typical American Chinese restaurant like beef tendons, tripe, smoked tea duck, and stir-fried silky melon. 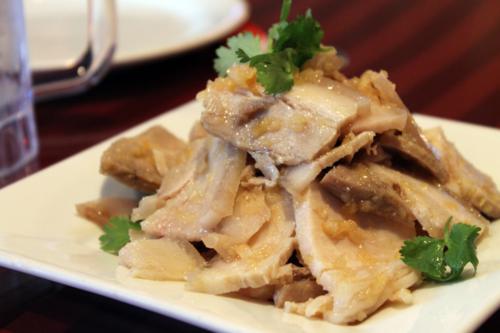 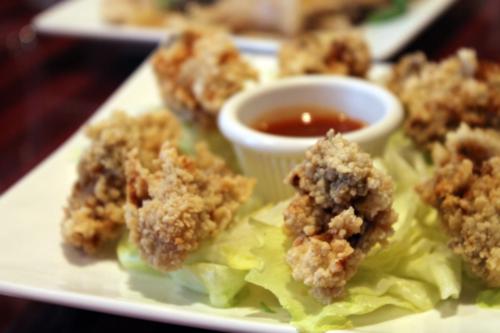 Wow, the pork belly was amazing, and I’m not much of a pork belly fan. It was slathered in delicious garlic. Be prepared for some crazy bad breath, but it’s totally worth it. The oysters weren’t as jaw-dropping good, but they were silky and their coating was fried to perfect crunchy clumps. Without the dipping sauce, they may have been boring, but with it, they were great.

Four of us ordered off the Szechuan menu and one went for a more standard beef and broccoli. 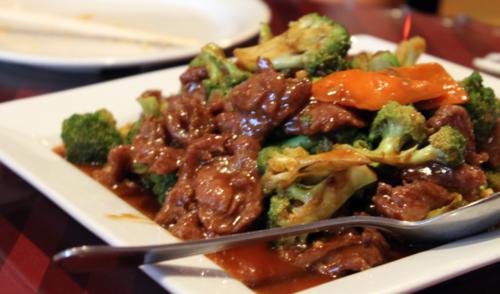 I only speared a broccoli, so I don’t have much to share about that dish, but Friend #1 was happy with it. And the portions were huge—they were huge for all of our choices.

My husband opted for the boiled pork in Szechuan hot oil, which we didn’t realize was almost souplike. 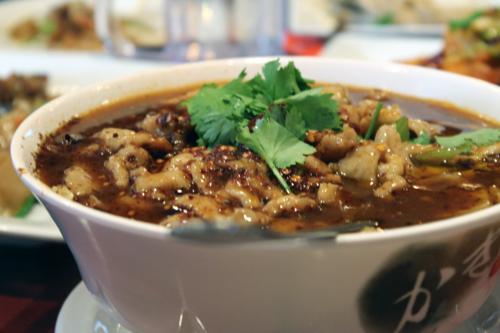 However, being souplike was a plus for using rice to sop up the delicious sauce. This was ranked as the spiciest of the bunch, but it wasn’t too much for any of us, though the extra kick settles in after the bite. The pork had a fun texture, and I really liked the cabbage in this dish.

My choice was also pork but shredded pork with tofu skins. 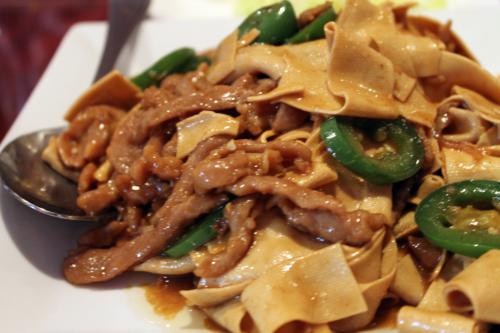 I’m a huge tofu fan, but I hadn’t had just the skins before and I never expected them to come out looking like thick pasta noodles. I loved them! Even my husband enjoyed the texture, eating several helpings of them and he doesn’t think he likes tofu. The spice was just right for me.

Friends #2 and #3 had the crispy fish fillet with chilies and the beef chow fun. 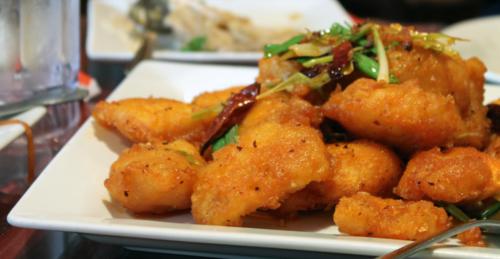 Obviously, the fish had a lot more going on than just chilies. There were scallions in abundance, too. That dish, in combination with the fried oysters, convinced me that C & T Wok does fried food really, really well. Both had very different batters—the fish had a smooth shell fried perfectly—and the seafood inside was cooked just right for both dishes. I definitely recommend the crispy fish, and I can’t even hazard a guess as to how much fish there was on that platter. As for the chow fun, I didn’t try it but I heard no complaints.

Dinner ended with a round of fortune cookies, though poor Friend #1 was sure she was cursed because hers was missing the fortune. I don’t think I can hold that against the restaurant, and I don’t want to because C & T Wok was excellent and deserves your business. Give it a try, and please share if you try something adventurous or off the Thai menu or both!