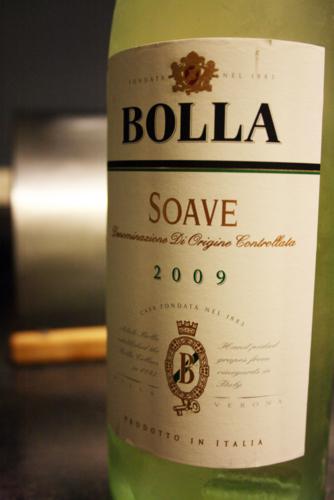 This is my first experience with wines from the Soave region of Italy.  Plenty of smells rise from the glass: lemon, peach, and vanilla. The peach is prominent when drinking the wine, and it lends a great flavor overall. It’s a buttery white but not nearly as much so as a chardonnay can be. It’s like eating a flaky crust from a croissant. Meringue and sweet lemon are the undertones, and a little peppery heat warms my mouth on its way out.

From perusing other blogs, I’ve learned that Bolla Soave had fallen out of favor by the 1980s, when Americans learned they had more options and Bolla was considered inferior. Based on this bottle, I can’t agree. I found it tasty, balanced, and a great dry white wine choice.

. . . slowly opening aromas of pear, flowers and roasted nuts. It has a little more body than the Gavi with pear and green apple fruit in the mouth and a smooth finish.

And  that’s it. There was plenty of information of Bolla Soave’s past but little on its bottlings of the present.