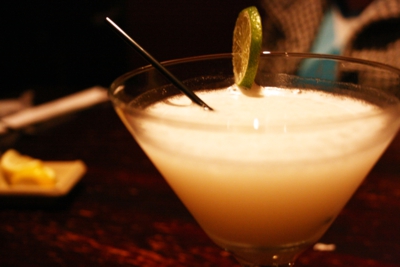 This is a very simple martini, consisting of vodka and Gekkeikan nigori sake, which is the creamy type for those of you not up on your sake terminology. Frankly, there’s no need to have a martini this simple; you might as well drink vodka or sake on their own. That said, both are pretty good together! I don’t think either adds anything to the other, but they combine fine. There’s that creamy banana flavor, some almond, and the vodka watering down the sake’s flavors somewhat, though not the drink’s alcohol content of course. It gets points for presentation, and I did like the lime flavor from my slice that mingled with the vodka and sake by the end of the drink.