This is a restaurant with a lot of potential, but the service and food timing is definitely not doing the food justice. The ambience is pretty nice—it’s amazing how some track lighting and gold sheers can really transform an old Pizza Hut. 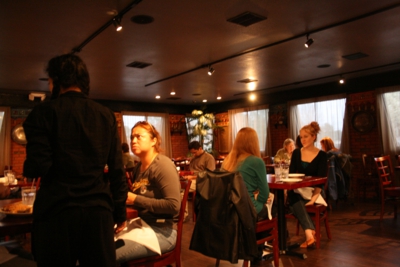 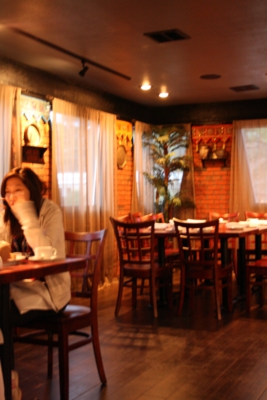 There’s an Afghan-styled trim lining the walls and various Afghan costumes and dishware are hung about, along with a few artistic representations of the country. Atmosphere gets a plus!

Prices were right on for the food and portion sizes, which is always nice. The service was the problem, and less any particular server than the fact that there was only one, and only one is simply not enough for anywhere from 5 to 8 tables with constant to-go order pickups as well. It’s especially not enough when the kitchen is slow, too. Our server also seemed flummoxed when we asked any questions about the menu. The listed dough yogurt drink was unavailable—why is it so many ethnic restaurants in the area don’t actually have the specialty drinks on their menus? I then asked for turkish coffee and was told that those drinks come with dessert only. Then I asked about making my meal spicier as the menu instructed me to. I was told that my dish wasn’t spicy at all, and I wouldn’t want to change that—I took her word for it. Again, this attitude was more an example of what happens with only one person working, leaving no room for deviations from the standard protocol familiar to him or her.

As for the food, we received our salads that come with the order of an entree before our appetizers, which was fine with me. They were simple iceberg salads with some tomato and cucumber. The dressing was unique, very thick and tasting of dill and mild horseradish. The chutneys were fantastic and easily the star of the whole meal—a cilantro and mint one, I believe, and a red one that was moderately spicy but very, very fresh and bright tasting. You bet I added them to my salad!

My husband didn’t want the pumpkin bolanee (fried turnovers), so we tried the combination platter appetizer, which features two of each of the bolanee—pumpkin, green onion and spinach, lamb, and beef. Sambossas and aushaks (boiled dumplings) were also on the appetizer menu. 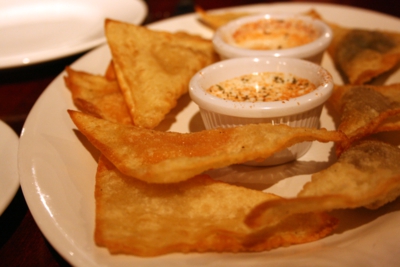 They would have been quite tasty if they were less greasy and crisper—likely the result of having them rushed through frying because the order was forgotten or sitting too long to come out . . . because the order was forgotten. But the fillings, especially the vegetarian ones, were great. The pumpkin was delicious and sprinkled with a tad of sugar on top. The green onions were vibrant. The meat ones had very little meat in them, but what they had was pretty tasty.

On to the entrees! 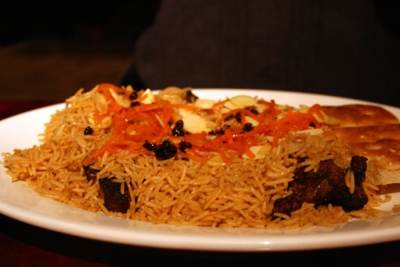 Kabuli Palau with carrots, raisins, and almonds and either beef or lamb hiding under the rice. 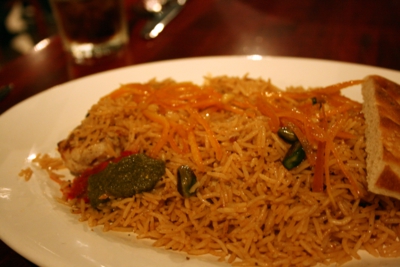 As with the turnovers, they were greasier that we would have liked. My husband wasn’t thrilled with his in general—he’s fairly sure he got beef instead of lamb, which can mess with your textural expectations. I was quite pleased with mine. The candied orange rind and pistachios made for a light, lovely sauce. All went well with my plentiful scooping of chutneys. I wouldn’t write home about the bread—a little stale and uninteresting, but hey, great with those chutneys!

I wanted to stay for dessert and maybe that turkish coffee at the appropriate time, but we waited . . . and waited . . . and I decided it simply wasn’t worth the time involved that it would take. So we asked for our check and left.

Unaabi has some good food and flavors that you aren’t likely to get anywhere else locally, but if you want to try it, make sure you come with plenty of patience in store.