The third outing of the Social Media Supper Club took place at Mawa’s Taste of Africa, in Morrisville, at demandycom’s suggestion. We had a small group this time around, but it was lovely, as always, to see demandycom (Mandy), bengfarrell (my fine husband, Ben), dawnacrawford (Dawn), apiciusapprenti (Rocio), and BCwritr (Brian).

Per the front of the menu, MAWA stands for My Authentic West African, but it doesn’t take long to learn that Mawa is also the name of the chef of this far-ranging restaurant—she will undoubtedly stop by your table between orders to make sure you are loving her food. The rest of the restaurant staff are just as pleasant and more than willing to make sure we had everything we could want and were satisfied. It doesn’t take much more than eating Mawa’s great food for that to be the case.

The dim lighting could stand to be softened, but otherwise, the interior of Mawa’s is attractive and welcoming. The walls are orange with African masks hung on them. Murals of African animals and baobab trees adorned the overhang and back wall. 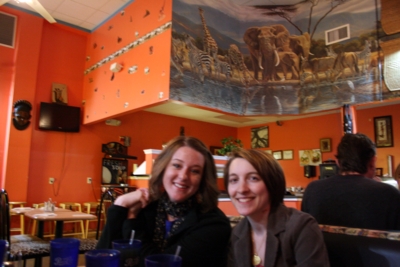 Blurry Rocio and Mandy, unaware of the charging elephants above them. 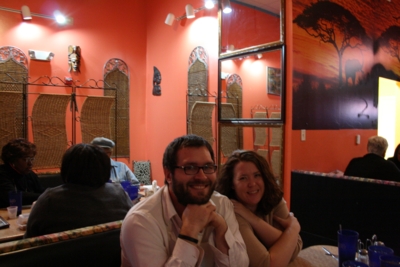 Brian and Dawn in front of the baobab mural and some rattan screens that hid a traditional African eating area.

We ordered a number of tasty drinks. I had the iced Moroccan mint tea. Mint teas are always refreshing, but this one was too close of a relation to southern sweet tea for my taste buds—in other words, I’d like it unsweetened. From two small sips, I’d say the mango juice and the bissap hibiscus fruit punch were also pretty good.

A flat bread round started us out. The crispy bottom of the bread was fabulously, especially with the char on it. The dipping sauce piled in the middle—a yoghurt or sour cream with a little bit of carrots, lots of dill, and garlic—was just plain awesome. 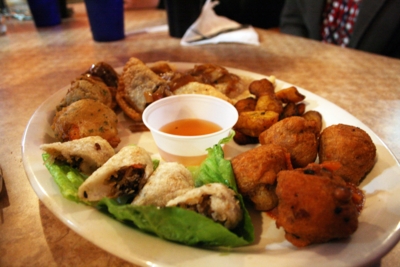 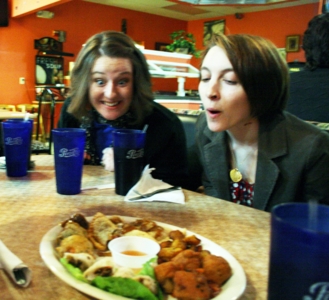 I loved the accara—they were similar to falafel, but somewhat spongy in texture due to the combination of smashed up beans and cornmeal. The tomato-onion sauce served with them was delicious and somewhat spicy. The fatayas were pretty good, housing lightly seasoned ground beef in a tasty pastry crust. Neemes are a heavier version of a spring roll, not my favorite of the bunch with its chewy texture but interesting, nonetheless. The plantains and shrimp beignets were delicious. Dawn was sticking to a vegan diet, and without even asking, they surprised her with vegan appetizers on a small plate since she couldn’t partake in the large sampler.

The entrees covered a range of African dishes, with the country of origin listed by the name of each. I opted for the tiga deggeh, a dish from Mali with chicken, squash, carrots, potatoes, and cabbage in a peanut sauce. I think that vegetable combination was typical of most of the dishes. 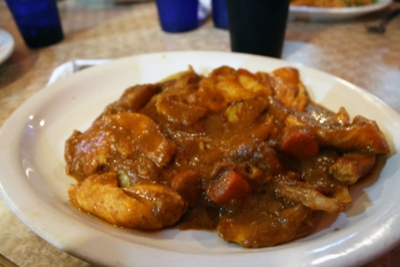 It was a moderately heavy sauce, and to my pleasure, the peanut didn’t overwhelm the other spices in the dish. The chicken was sliced thinly and cooked well, and it all went quite well with the fufu, one of the side options along with couscous and rice. It’s typically a paste made with mashed root vegetables—plantains and cassava in this case—and it’s fairly flavorless with a doughy, gummy consistency that worked quite well in conjunction with the sauce.

Ben was pleased with his curried goat and vegetable dish. 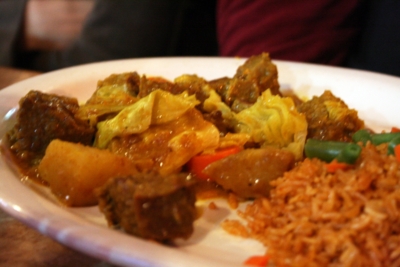 It wasn’t as good as the South African goat dish he had in the Camden Loch Market in London, but it’ll certainly do if you don’t have time for a quick, trans-Atlantic flight.

The vegan platter looked quite appealing, loaded up with a variety of goodies including falafel, hummus, pita tips, plantains, tabouleh, and grape leaves. I also admired the pile of couscous on Brian’s chicken curry ganar plate. 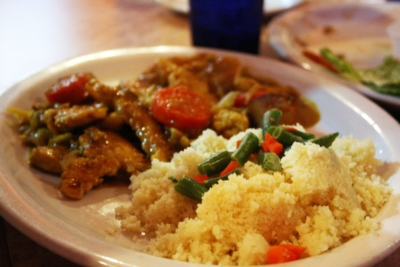 Rocio thought her lamb wat—an Ethiopia platter with a red pepper sauce for the meat, lentils, and two side vegetables—was delightful. The spice heat was too much for Mandy in her chicken version of the same dish. 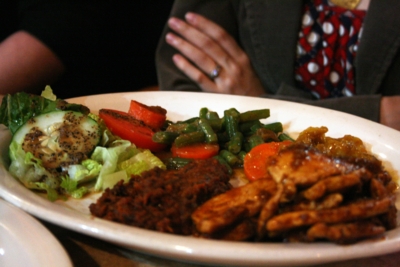 I thought the lentils were delicious, as was the injera bread served with the meal—best I’ve had, even compared with the couple of Ethiopian restaurants I’ve tried. I’d describe the heat level as medium, but you can specify hotter or milder if you’d like.

We all looked forward to dessert, and I’d heard great things about the mbourou fass, so most of us ended up ordering it. 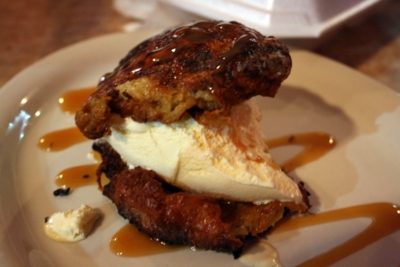 It gets best presentation of the evening, in my opinion. Thin slices of brioche were battered and fried, then ice cream sandwiched between them. All was then piled on top of a plantain caramel sauce. It was pretty darn tasty, with a fluffier texture than I expected. Make sure you let some of the ice cream soak into the brioche.

The beignets de pommes was a copious portion, as you can see. 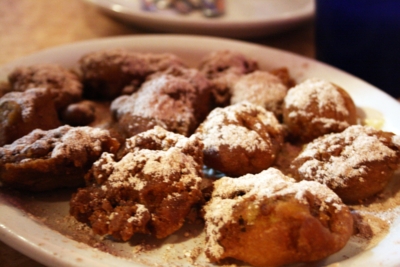 Each apple wedge was breaded and fried then doused with a healthy portion of cinnamon and powdered sugar. Dawn thought they were delicious.

My favorite dessert, however, was Ben’s chacry. 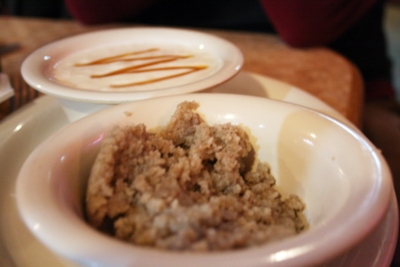 You take the millet couscous and dip it into the sweet yogurt and cream sauce. Oh my, I could have swum in that cream sauce. Delicious with some cardamom and citrus at least, but there may have been any number of tasty ingredients making it a delight. I’m not sure anyone else was quite as impressed, but hey, more chacry for me.

We all agreed that Mawa’s is a place worth trying every item on the menu, so we’ll be back. I’m especially eyeing the Senegalese yassa tilapia cooked in a citrus and onion sauce. The atmosphere could use a little polish, but the hearty welcome and food adventure will more than make up for it. If you’re feeling a bit less adventurous, they also offer pizzas with a variety of African-inspired toppings.

One thought on : Mawa’s Taste of Africa with the Social Media Supper Club *CLOSED*