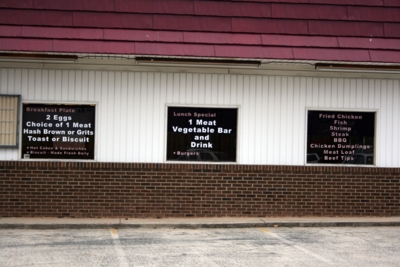 I have passed Country Junction on the road a great many times. Getting my car repaired at AAA allowed for me to walk over and try it out for breakfast. I believe the building may have housed fast food seafood in its last incarnation; many of the windows are portholes in the kitchen area and there are framed seashells on the walls of what looks like a typical fast food interior, though very clean and with a nice row of potted plants above the warmer case. I asked the owner, who was working the register and super nice, if it was related to the Country Junction in Carrboro, and he said yes, his friend owns that store, but they aren’t technically linked. They serve almost all the same menu, though, he said.

That menu is written in chalk on a blackboard and rather extensive in its combinations of meats, breads, and eggs. The breakfast plate is typical: 2 eggs; choice of hash browns or grits; choice of homemade biscuit, croissant, english muffin, or toast; and choice of meat, which is the only part that affects the price with salmon cakes and chicken fillets on the upper end of pricing ($4.55) and red hots, fatback, bacon, sausage, and bologna at the low end ($3.49). Chicken fried steak and country ham fell somewhere in the middle.

I opted for the egg sandwich option, which starts at $2.55 for just bacon and bread and only popped up about $0.50 to add on egg and cheese. A side of hash browns cost me $1.15. 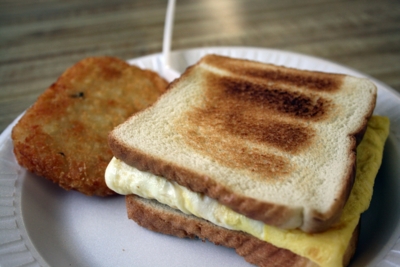 As you can see, it’s simple fare, but at a great price, so I was happy. Yes, the hash browns are obviously prepackaged, but what made me happier than the price was that they weren’t greasy, either. Neither was the sandwich. Crisp bacon, well-toasted white bread, and fried egg wrapped around a slice of American cheese, and I had no complaints whatsoever. If you’re in the area and craving such food, I would definitely recommend getting it at Country Junction. For that price, why not?

They are also open for lunch with the main option being a drink, the vegetable bar, and your choice of meat starting at $6.49. The vegetable bar looked to hold six different sides, and I think it’d be nice not have to choose just one but to take a little bit of all of them—I love my sides. Anyone know what they normally offer for veggies? The meat options change from breakfast with the addition of chopped barbecue pork, liver and onions, fried chicken and fish, chuckwagon beef, and fried shrimp. Sandwiches made with hamburger, barbecue, or chuckwagon beef start at $3.39 on their own and come with fries for $5.60. There are also daily specials of beef tips, meatloaf, and chicken and dumplings.

If you have an opinion on their lunch, I’d love to hear it!