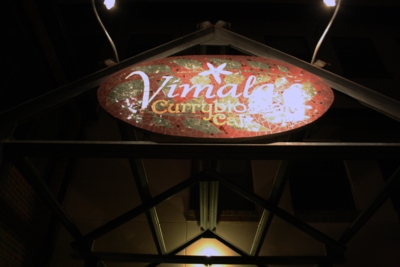 The sign is much prettier than my bad photo shows.

Vimala’s Curryblossom Cafe has been in Sandwhich’s old space in the Chapel Hill Courtyard plaza since July. It is an Indian, order-at-the-counter restaurant, and we were excited to find a sitar player providing music on the evening we went. This is a very small space, so don’t be surprised if you don’t find a seat right away—that will be better once the weather warms up and the larger patio area can be used more comfortably.

Vimala Rajendran, the owner and chef, is well-loved in Chapel Hill and Carrboro for her cooking that first took off in the form of catering for friends and large dinner parties. The restaurant was opened with the donations of many fans and friends in the area. She updated the Sandwhich decor with brighter colors, a rug on the wall, lime green curtains in the back, and a row of pretty flower lamps over the register. 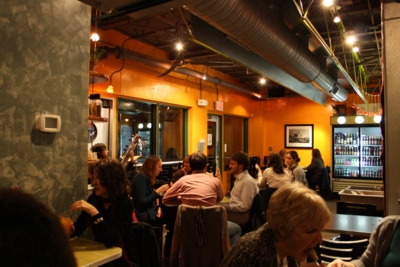 Make sure you look at the specials board to the right of the register, though it’s easy to forget while browsing the regular menu that heavily features vegetarian, vegan, and gluten-free options. 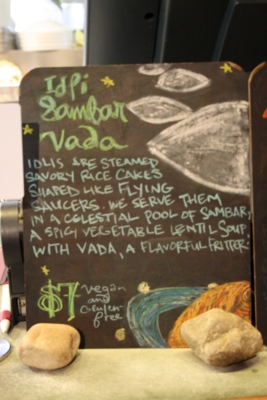 There were a few chicken and pork items also, but not enough to satisfy my more carnivorous husband, even though tandoor chicken can be added to any dish for $4. My vegetarian friend found his complaints over the lack of meat options quite entertaining. The prices were considered a bit steep by her husband, especially when considering that the Mint, a full-dining Indian restaurant with a menu priced only a couple more dollars per plate, is across the street. Portions here were on the smaller side for entrees, so I can see that complaint, but prices were highest for entrees featuring locally sourced ingredients—everyone has their own limit for where quality and value should meet. I did think the higher priced items were too far up there, but most of the entrees were closer to $10, which works for me. There is an extensive list of sides, too, from free spicy achaar pickles to $3 uttapam, a rice and fermented dal pancake.

Mango lassies, hibiscus teas, and marsala chai are all available. I loved the lavender lemonade that I ordered. 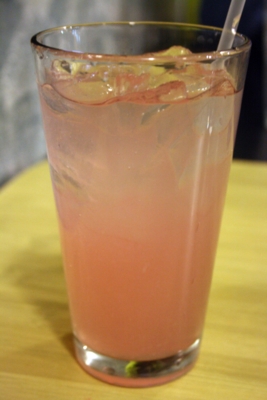 Not only was the color immensely pleasing, but the flavor was great: pink lemonade followed by a rush of lavender that’s just right—in other words, you don’t feel like you’re drinking potpourri. I highly recommend it. My husband thought his mango lassi was pretty good. 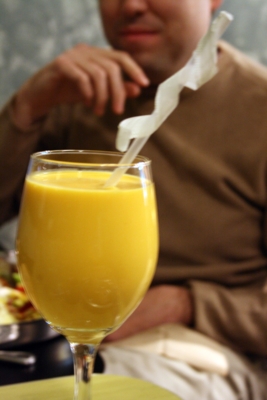 The husband and I shared a pair of samosas. 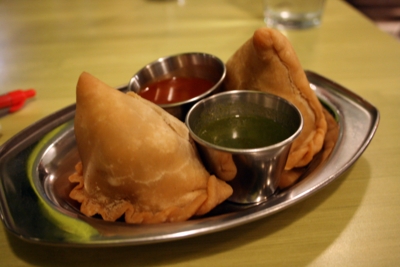 The crust, I thought, was really great. It’s more closely related to a pie crust than the somewhat bubbly, fried dough typical of an Indian restaurant. The ingredients were nicely spiced, and the peas gave great flavor to the filling. They were also huge! My husband missed the usual samosa crust, though. I found the tamarind-date dipping sauce especially good.

Our friends had the samosa chole chaat (samosas over chickpea curry with onions, tomatoes, chutneys, yogurt, and crispy noodles on top) and the tandoor chicken plate (with yogurt, basmati rice, and salad). 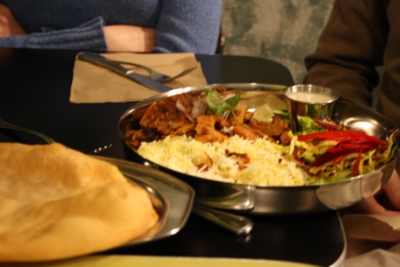 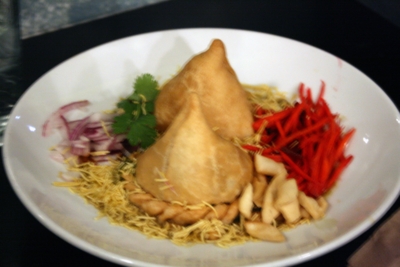 Presentations were nice, with lots of color. The tandoor chicken was very tender and tasty, but the sauce with it was felt to be lacking in flavor. The accompanying salad was fresh, and I thought it was a great addition to a plate of Indian food, bringing in some nice crispness to go with normally rich sauces and rice. The chapati bread—no naan on the menu here—was pretty good. You can see it to the left of the tandoor chicken plate.

My husband thought that his tandoor chicken tali plate could have used more heat and flavor in general. 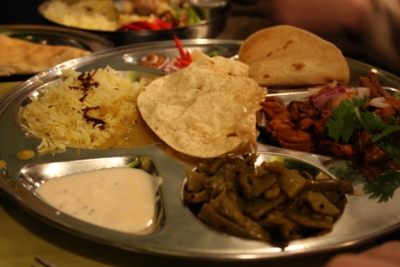 In addition to the chicken, it came with basmati rice, dal, bhaji, chutneys, papadam, and chapati. He didn’t particularly like any of it. I think it was an off night for my husband, though I have to agree that the bhaji, at least, was pretty flavorless. It was a simple stir-fry of a green vegetable that might have been slivered okra.He likened the taste and feel of the chapati to a thick tortilla.

My own dish, the kofta curry, was much better, though I managed to delete the picture somehow. The koftas themselves, little fluffy balls of vegetables, dissolved on contact with my tongue, a wonderful textural feeling. There were only 3 or 4 small balls, though, or perhaps more fell apart in the sauce—they were very loosely held together, which added to that textural happiness. I would love to try a meatball version with the same binders. The sauce was lightly spicy, but the portion size was fairly small—there definitely wasn’t enough sauce for my rice to sop up.

We then opted for dessert, both couples splitting the special dessert of the day called rasmalai and a regular offering of gaajar halwa, grated carrots pressed together with sugar, lots of cardamom, and pistachios. 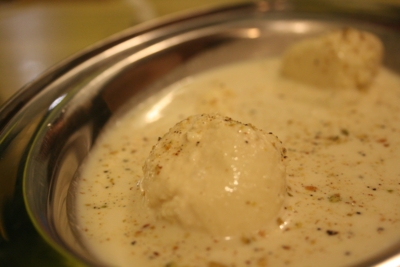 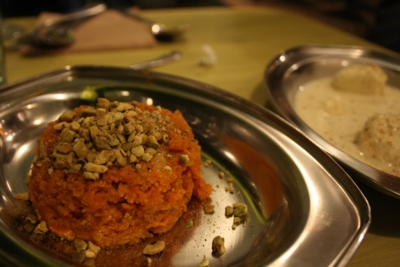 One half of the group did not like the carrot dish at all, and the other thought it was great. I was on the great side, especially after the first few bites when the cardamom flavoring dulled a little—there was a lot of cardamom. I’d recommend stirring the cardamom and pistachios in with the carrots.  There was also some sort of sour taste that I couldn’t place, nor appeared on the ingredient list—it was an adventure in dessert eating! The rasmalai were paneer dumplings in a clotted cream sauce that we determined would be a great base for a rice pudding. It was good, too, but I was much more intrigued by the bold flavors of the halwa.

Verdict, you ask? This is a tough one. Overall, the atmosphere and presentation were great, though the prices were somewhat steep for portion sizes and seat-yourself dining. The food had a wonderful, homemade feel and taste to it—there is no question that the ingredients were quality and the textures were very nice. However, the food was somewhat blander than we expected. I would definitely go again, but I’d also be tempted to try that restaurant across the road first.