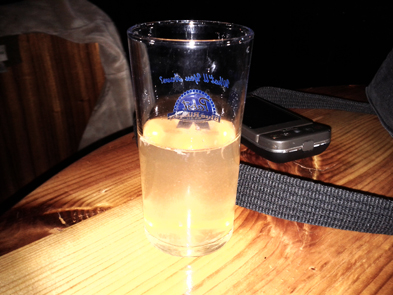 As you can see, I’m not talking the band here, which I happen to love, but the shooter named after them by Motorco. The first time I went to Motorco, I thought naming shots—there’s no cocktail list here, just fancy shots—after local bands was a fun twist for Troika, Durham’s annual music festival. Turns out it’s standard practice! However, only the names of the shots appear on the blackboard, so I’d suggest asking the bartender if you can take a peek at their cheat sheet to find out what’s actually in that drink you’re ordering—unless you’re feeling daring. And if a band you enjoy is on that board, it probably is safe just to order the shot, if the rest of them are paired as well as this shot was with its namesake.

Bourbon, ginger, peach, bitters, and I believe, lime, were combined for this small, yet sophisticated, libation. Just like the band, it went down smooth. For a shot, it really was just the right amount of everything to make it glide down your throat and leave you feeling a bit sweet afterward. If this were in cocktail form, however, it would likely get bland after a few sips and call out for something unexpected, and maybe a little spicy, to come in and liven up the drink. It’s a fine shot, but at that price, I do want a bit more liquid in my cup.

One thought on : The Old Ceremony @ Motorco