Panciuto is an upscale eatery with Italian flair on the main strip of Hillsborough. They display the names of the farms they source from proudly on the tables. It’s a cozy space with brick and cream walls, dark wood, a fireplace, and a subtle, curvy element in the design of the offset front section and the red chair backs. The lighting is mellow yet not dim, and tables are set with flowers that end up by your plate as the meal progresses. An odd portrait of Mark Twain hangs by the hostess stand, and we pieced together that the chef/owner is also an artist and it was likely done by him. Thus, Mark Twain in an Italian restaurant is somehow appropriate. As I was still cameraless for this dinner, one of my companions let me use her cellphone for the pictures you’ll see here.

The meal got off to a great start with a round of complimentary prosecco in tiny hurricane glasses. Offering little freebies like that always puts your diners in a good mood, just in case anyone wanted to know. The bread served was focaccia cut into thin slivers. The crust was delightfully crunchy but too salty and a tad too greasy for my taste—neither of which stopped me from eating two slices. It was served with an herb butter.

Breadcrumbs figure prominently in the menu, which is great, as they added lovely texture to each dish I had them in. For an appetizer, I was very tempted by the lettuces with hazelnuts, shaved pecorino, and buttermilk-limoncello dressing, 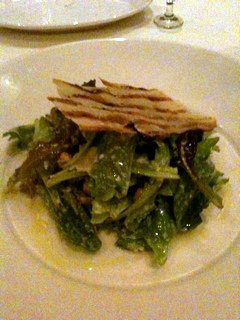 Yes, that is one long slice of cheese on top.

but the cheese plate ultimately won out, mainly because fried goat cheese was one of the options. It was accompanied by fig jam.  There was also smoked farmer’s cheese with hot pepper jelly, and Carolina New Moon with honey. 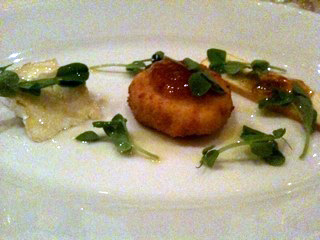 As you can see, the presentations were lovely. I loved the smoked cheese, and it went so well with the pepper jelly. I did get a bite of the lettuces that my friend ordered—the buttermilk and light lemon flavor from the limoncello together were elegant. 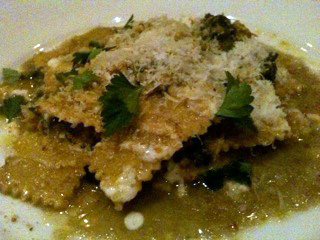 Another gorgeous presentation, though it’s not so obvious in the picture. The dish possibly suffered from too much flavor, if that makes sense. My taste buds were overwhelmed about halfway through, but it was quite good up to that point. Chicken was the best choice of meat because anything with a stronger flavor would have been just too much. The pasta, a ravioli derivative, was a tad too al dente, but a friend had the same dish and she said hers were just right, so that’s likely not a concern.

Another companion had the pork chop with a macaroni frittata that was made by steaming it in the oven. 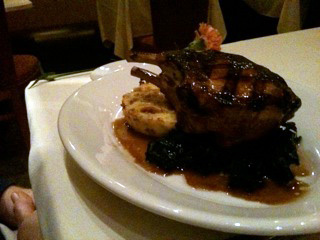 She thought the smoky flavor of the pork chop was fab and was quite impressed with the frittata as a side dish. It was definitely unique!

Panciuto only has two options for dessert, but luckily for us, they were both delicious. The warm, potted chocolate with crumbled biscotti and whipped cream was sold to half our table by another diner who declared it to be all a woman would ever need. My friends didn’t disagree when they ate theirs, though I was more called to by the steamed gingerbread cake with cinnamon ice cream and caramel. 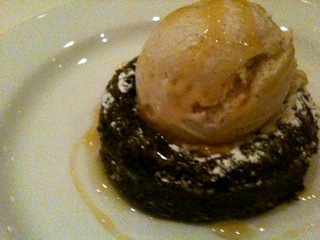 It was unbelievably good. The ginger was potent, and I’m not a big ginger fan, but combined with the cinnamon ice cream, it was succulent. The caramel added richness and balanced out the ginger as well. Super, super, fabulous dessert.

Loved the presentations. Loved my dishes though the salt could be cut down on. Loved the inventiveness. Loved the ambience. Panciuto is definitely worthwhile if you haven’t been yet.