Home / Announcements / My Cat is Missing

My Cat is Missing 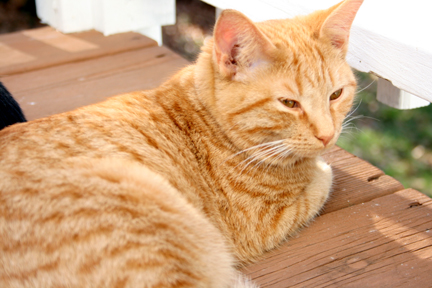 Loki is a male, neutered, orange and tan tabby.  He has a white spot under his neck/on his chest and bits of black on some whiskers, close to his nose.  He’s always been a runt, so his head is small and he is usually skinny.  If you live in Southwest Durham and think you may have seen him since 5/28, please email me at becca@yellow5labs.com.

My cat is missing.  He’s been missing for almost a week now and every day, I cry.  I miss my cat.  He is one of the most personable, friendly, mischievous cats that I’ve ever known.  It probably doesn’t help that we named him Loki after the Norse god of trickery.  Loki, you see, likes a challenge.

I tell myself I shouldn’t worry, because he is a wanderer.  Ever since his first breath of fresh air, at four months old, he has been focused on getting back outside if locked in.  He’s gotten close to turning doorknobs, even without a set of thumbs.  Now that I think of it, his struggle to be free actually started on the car ride home from the shelter, when he was barely eight weeks old and managed to finagle his way out of the cat carrier.  What did he do in the vast world of the car?  Climbed onto my lap and purred himself to sleep.  Loki hates cages of any size but he loves people.

It’s that love for two-legged creatures that has done him in on all previous escapes.  Loki, I’m sure, would call them adventures, all the way up to the time he convinces some friendly person that he’s hungry or needs a pet and they look at the number on his tag and turn him in to us, his captors.  We’ve picked him up from every subdivision within a mile, a restaurant and pharmacy down the road, even from hikers that he charmed on nearby trails.  Usually, these forays last two days, maybe three.  His sister was gone this long once, only to return the exact same time of day as she had disappeared a week earlier.  She’s never disappeared again.   I think she was stuck in a tree.  Loki is an adept tree climber.

The guilt I feel keeps building the longer we do not know where he is or if he is alive.  Inevitably, this column will bring at least one comment about how we really should keep the cats inside, since they will live longer lives and be protected from all harm.  I consider that, even though my family has never had indoor cats and they have all lived long, content lives before.  But I’ve also never had a cat that wanders like Loki does. If he comes back home, he will, at the very least, find himself bound in by an invisible fence, as I just can’t handle the worrying anymore. I let myself believe that he knows this, which is why he is on an extended bender.  His last hurrah, if you will.

I have considered that he may have been hit by a car, though I have not glimpsed any cat bodies on the sides of the roads and he is both tagged and microchipped, so we should be contacted if he is disposed of or ends up at the shelter or a vet’s office.  I’ve been to the shelter twice now, just to make sure, with no luck.

I’ve started to hate the birds in my yard that fool me with their chirping.  Loki has a jingle bell on his collar, contributed by one of his many admirers to make it easier for birds to avoid his attack.   These birds in our yard, for the first few seconds of a song, sound exactly like those bells and fill me with fast-fleeting hope that he is coming up the walkway.  I send them mental waves of malice each time one starts to trill.

I’ve made posters and put them on all the stop signs and grocery stores in our neighborhood.  When one of them disappears, I jump to conclusions, thinking that a kitty thief doesn’t want him to be found.  Of course, only the occasional sign disappears so foul play is not likely.

Yesterday, someone saw our sign and called.  Yes, they know Loki; he comes by all the time and plays with their own kitty, who is also very friendly.  No, they haven’t seen him since Thursday but strangely, their cat also disappeared that same afternoon.  Great.  Now I’m imagining a catnapper combing the neighborhoods for any cats friendly enough to climb in a stranger’s car.  What would they want with our cats?  People don’t eat cats in the U.S.  I’ve never seen someone proudly sporting a cat fur coat.  Do they want reward $$?  Well, I’ve put up enough signs to get a phone call from them, in that case.  My husband says if someone did call, we’d tell the police.  I say, we’d get Loki back first, then call the police.  Priorities.

More likely, though, the two cats are on a kitty joy ride, enjoying their time in the great wide open before hunger, thirst, or loneliness brings them back home or at least to someone else’s front step.  And then, the phone, which I have been glaring at for its silence, will ring and I will jot down the address with excitement and cry again, this time with relief, as I speed towards my cat.  He is missing but that does not mean he is gone.

17 thoughts on : My Cat is Missing